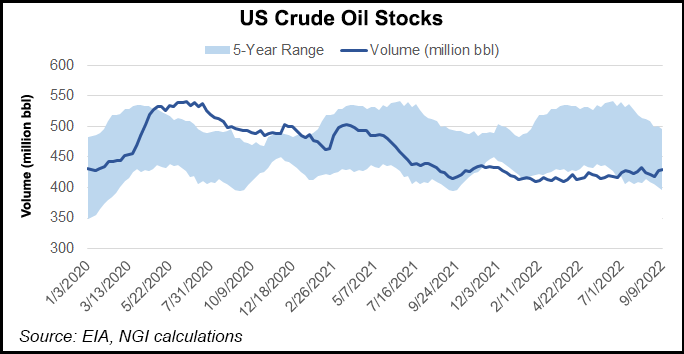 Production for the week ended Sept. 23 declined by 100,000 b/d to 12.0 million b/d, the U.S. Energy Information Administration (EIA) said Wednesday in its Weekly Petroleum Status Report. The drop left output below the 2022 high of 12.2 million b/d and far from the record level of 13.1 million b/d reached in March 2020, prior to the pandemic.

Demand, meanwhile, rose 10% week/week in the Sept 23 period, though EIA data showed that consumption has been choppy in recent weeks and is down from a year earlier.

West Texas Intermediate crude prices hovered around $80/bbl in intraday trading Wednesday, down more than 30% from the 2022 peak reached in June.

The production and price declines come as lofty inflation and soaring interest rates in the United States threaten an economic downturn. Those same factors, coupled with fallout from Russia’s war in Ukraine, endanger Europe’s economy. The conflict hastened an energy crisis in Europe – notably feared shortages of natural gas ahead of winter. This has weakened the continent’s collective economy and undermined demand for oil, analysts at Goldman Sachs noted.

What’s more, they added, activity in China also has slowed this year, in large part because of ongoing and economically stifling lockdowns imposed by the country’s communist government and its zero-tolerance coronavirus policy.

“Investors face a maze of uncertainty going into winter that understandably dissuades investment across the commodity complex,” the Goldman team said.

With demand fading, U.S. commercial crude inventories for the Sept. 23 period, excluding those in the Strategic Petroleum Reserve, increased by 200,000 bbl barrels from the previous week. At 430.6 million bbl, domestic stocks are about 2% below the five-year average.

Additionally, in the United States this week, Hurricane Ian barreled toward Florida’s western coast on Wednesday. The National Hurricane Center warned of both “catastrophic storm surge of 12 to 16 feet” and “catastrophic wind damage” that was expected to knock out power across swaths of the Southeast and limit travel, minimizing energy demand this week and potentially longer.

“This will be a demand destruction-type event,” said Robert Yawger, director of energy futures at Mizuho Securities USA LLC.

In its monthly oil market report, OPEC projected global oil demand would rise by 3.1 million b/d this year and 2.7 million b/d in 2023 to 102.7 million b/d. But the cartel and its partners, collectively known as OPEC-plus, said this month they would cut crude oil output by 100,000 b/d in October. The move would effectively offset a targeted increase of 100,000 b/d in September.