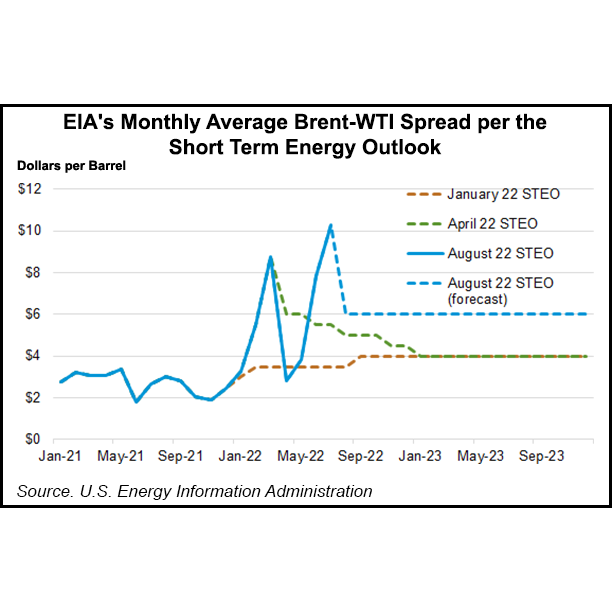 In the weekly petroleum report issued on Wednesday, EIA said the inventory declined compared to a build of 5.5 million bbl in the previous week. The American Petroleum Institute on Tuesday had estimated a crude draw of 448,000 bbl.

Gasoline inventories drew down by 4.6 million bbl for the week, versus a 5 million bbl pull a week earlier. Gasoline production averaged 10 million b/d, versus 10.2 million the preceding week. Excluding the pull from the U.S. Strategic Petroleum Reserve, inventories would have fallen by an estimated 10.46 million bbl.

For most of 2021, “more liquids fuels were consumed globally than produced,” said EIA researchers led by Kimberly Peterson. Beginning in April, however, production exceeded demand.

In the most recent Short Term Energy Outlook, EIA estimated that global crude supply and demand would be “very closely matched. We forecast production in 2023 to average 101.3 million b/d and consumption to average 101.5 million b/d.”

Citing the economic supply and demand model, EIA noted that when liquid fuels consumption rises more than production levels, “prices generally rise. When production is more than consumption, prices generally decline.”
Because of changes to that dynamic in the middle of this year, EIA now is forecasting that the price of Brent crude oil, the global benchmark, should average $105/bbl in 2022 and $95 in 2023.

One reason for the revisions: Russia.

Russia produced more petroleum and other liquid fuels between May and July “than we had previously expected, despite sanctions and independent corporate actions,” EIA researchers noted.

Additional Russian sanctions by the European Union are to enter effect in December and February, which could upend the equation again.

“We expect most of Russia’s crude oil and about half of its petroleum products that will become subject to EU sanctions are likely to be sold to other markets,” said Peterson and the EIA team. “We expect Russia’s production to decline by 1.6 million b/d between the beginning of the 4Q2022 and the end of 1Q2023.”

On the crude oil demand side, consumer sentiment “has been decreasing as inflation remains high and borrowing costs have been increasing due to rising interest rates,” EIA researchers noted. Even with no downward pressure on consumption, demand still should increase year/year through 2023.

Decisions by OPEC also are likely to impact global supply.

To that end, new OPEC Secretary General Haitham Al Ghais said Wednesday the cartel was not to blame for rising inflation and high gasoline prices. He instead pointed a finger at the oil and gas industry overall for not investing enough to build reserves, comments recently echoed by several of the biggest oil and gas CEOs.

“There are other factors beyond OPEC that are really behind the spike we have seen in gas and oil,” Al Ghais said on CNBC. “I think in a nutshell, for me, it is underinvestment – chronic underinvestment.