Department of the Interior (DOI) Secretary Deb Haaland has revoked a series of energy-related secretarial orders (SO) issued under the Trump administration and established a climate task force to coordinate across the department. 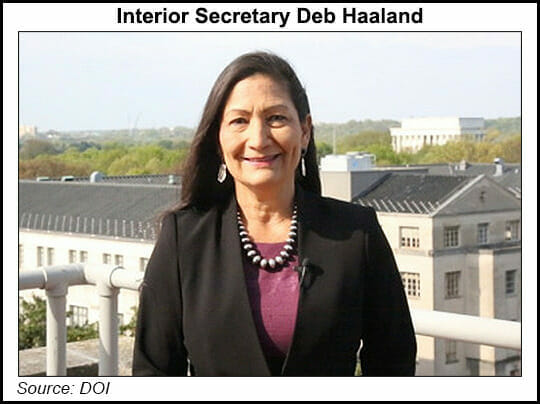 Haaland did so last Friday by signing two SOs of her own, reflecting a see-saw pattern of executive action that is becoming routine as Republican and Democrat administrations take turns in the White House.

The revoked orders all were signed either shortly after Trump took office in 2017, or in 2020, his last full year as president. They sought to promote extraction of natural gas, oil and coal resources on federal property, remove regulatory hurdles for energy extraction and infrastructure, and expand oil and gas development in protected areas such as the National Petroleum Reserve-Alaska and the Arctic National Wildlife Refuge.

Among the most controversial Trump DOI orders was SO 3355 from 2017, which sought to streamline environmental reviews and permitting under the National Environmental Policy Act, aka NEPA. The benchmark environmental law passed under President Nixon affects nearly every major infrastructure project in the country.

NEPA compliance has been at the heart of legal battles around projects such as the Keystone XL and Dakota Access Pipeline oil conduits.

The Trump orders “are inconsistent with the department’s commitment to protect public health; conserve land, water, and wildlife; and elevate science,” DOI said. It noted that the Trump SOs “tilted the balance of public land and ocean management without regard for climate change, equity, or community engagement.

“The new order does not impact the Interior Department’s ongoing review of proposals for oil, gas, coal, and renewable energy development on public lands and waters.”

DOI has paused new lease sales for federally owned tracts, both offshore and on land as it conducts a review of the federal leasing policy.

The SO establishing the task force also includes guidance for improving transparency and public engagement in DOI’s decision-making process, and ensuring that process is based on science.

The order also provides instruction to ensure that the level of NEPA analysis across DOI bureaus “is not diminished, that climate change is appropriately analyzed, and that Tribes and environmental justice communities are appropriately engaged.”

Haaland’s SOs follow the unveiling of Biden’s $2.25 trillion American Jobs Plan, an infrastructure package that seeks to accelerate the transition toward a carbon neutral economy and emissions-free power sector.

A coalition of business leaders also has urged Biden to beef up U.S. climate commitments ahead of the Leaders Summit on Climate scheduled for Thursday and Friday (April 22-23).

“From Day One, President Biden was clear that we must take a whole-of-government approach to tackle the climate crisis, strengthen the economy, and address environmental justice,” said Haaland. “At the Department of the Interior, I believe we have a unique opportunity to make our communities more resilient to climate change and to help lead the transition to a clean energy economy.”

Haaland said, “I know that signing secretarial orders alone won’t address the urgency of the climate crisis. But I’m hopeful that these steps will help make clear that we, as a department, have a mandate to act.”

The Trump-era SOs revoked by Haaland may be found here.

Related topics: Department of the Interior