Sempra Energy’s Cameron LNG LLC has received conditional approval to export liquefied domestic natural gas to countries that do not have a free trade agreement (FTA) with the United States. 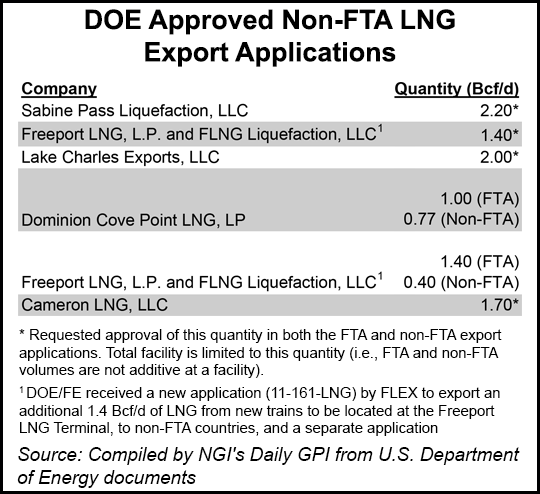 This is the sixth such conditional approval to export LNG granted by DOE. Only one project has received final DOE approval, Cheniere Energy’s Sabine Pass project.

The U.S. Department of Energy (DOE)authorized the exports from the Cameron LNG Terminal in Cameron Parish, LA. Subject to environmental review and final regulatory approval, the facility is conditionally authorized to export up to the equivalent of 1.7 Bcf/d of liquefied gas for 20 years.

The Cameron application was the next in line in DOE’s order of precedence following the previous authorization of non-FTA exports from the Freeport LNG facility in November (see Daily GPI, Nov. 21, 2013), which was DOE’s fifth non-FTA authorization. The fourth such approval was granted last September to Dominion Cove Point LNG LP, putting the volumetric total of such approvals past the 6 Bcf/d mark (see Daily GPI, Sept. 13, 2013).

With DOE’s Cameron approval the volume of authorized and conditionally authorized exports to non-FTA countries has climbed to 8.47 Bcf/d.

Last month FERC released its draft environmental impact statement for the Cameron LNG export project along the Calcasieu Channel in Hackberry, LA. It recommends multiple mitigation measures for the brownfield project but finds that adverse environmental impacts “would not be significant” (see Daily GPI, Jan. 10).

“Our progress in permitting and financing our project, along with successful execution of commercial and tolling agreements puts us on track to be one of the first LNG export projects under construction in 2014 and in full commercial operation in 2019,” said Sempra LNG President Octavio M.C. Simoes.

Analysts at ClearView Energy Partners LLC said in a note Tuesday that it looks as if Cameron will be the next project to secure Natural Gas Act Section 3 approval at the Federal Energy Regulatory Commission (FERC).

The Energy Information Administration is forecasting a record domestic natural gas production rate of 72.02 Bcf/d in 2014, DOE said in its announcement of the Cameron approval.

“The ability of our nation to export natural gas is made possible by an abundance of domestic supply that enables us to affordably meet our increasing energy demands here at home while also competing in an ever-growing global energy market,” said America’s Natural Gas Alliance’s Erica Bowman, vice president for research and policy analysis. “A range of experts have concluded that selling some of our nation’s abundant supplies of natural gas overseas will improve the U.S. trade balance and deliver jobs and economic benefits here at home.”

Center for LNG President Bill Cooper called the approval “an incremental victory” and said he’s waiting for the next one. “The pending applications in DOE’s queue represent a tremendous opportunity to grow the U.S. economy by unleashing billions of dollars of investment while creating thousands of jobs and increasing revenues to state and local governments. By deciding those pending applications expeditiously as DOE’s rules require, those projects will have a chance to compete in the international marketplace and bring dollars back to the United States.”

The pace of export approvals could quicken at DOE, analysts at ClearView said. This is because LNG export skeptic U.S. Sen. Ron Wyden (D-OR) is departing as chairman of the Senate Energy and Natural Resources Committee to be replaced by U.S. Sen. Mary Landrieu (D-LA), who is seen as more friendly to exports, ClearView said. In fact, the analysts said, about half of the proposed 15.88 Bcf/d export capacity would be cited in or in waters adjacent to Louisiana. Energy and Natural Resources has oversight of DOE.

The abundance of domestic natural gas is one of the factors DOE considered in granting the approval.

“Among other factors, the department considered the economic, energy security, and environmental impacts — as well as public comments for and against the application and nearly 200,000 public comments related to the associated analysis of the cumulative impacts of increased LNG exports — and determined that exports from the terminal at a rate of up to 1.7 Bcf/d for a period of 20 years was not inconsistent with the public interest,” the agency said.

The Industry Energy Consumers of America asserted again that the analysis behind DOE’s public interest determination allowing non-FTA exports is flawed because it relies on old data.

However, DOE addressed the old data issue in its Cameron order.

“It should be noted that in 2035, the AEO 2011 Reference Case had forecasted 0.5 Bcf/d of net imports, not exports, of natural gas plus LNG. Accordingly, we reject the intervenors’ arguments and find that, as to the impact of these LNG exports on domestic gas prices, intervenors have not overcome the statutory presumption that the requested authorization is consistent with the public interest.”

DOE said it would continue to process non-FTA export applications according to its order of precedence. “During this time, the department will continue to monitor any market developments and assess their impact in subsequent public interest determinations as further information becomes available.”

Natural Gas Supply Association CEO Skip Horvath said the Cameron approval was a step in the right direction. “We hope the Energy Department considers and decides on additional non-FTA export applications expeditiously, allowing the competitive market to make the final determination on the number of projects that succeed.

“Among other benefits, LNG exports provide additional market support for natural gas production by creating new outlets for both natural gas and the natural gas liquids that are abundant in some shale plays. As domestic demand for either commodity ebbs and flows, global demand can flexibly respond and act as a safety valve.”