As part of the Obama administration’s all-of-the-above energy strategy, the U.S. Department of Energy (DOE) said it will provide $4.5 million (corrected 7/29/14) in the Clean Cities Program to expand the use of alternative fuel vehicles. Concept papers are due to DOE by Aug. 1, with full proposals required by Oct. 1. 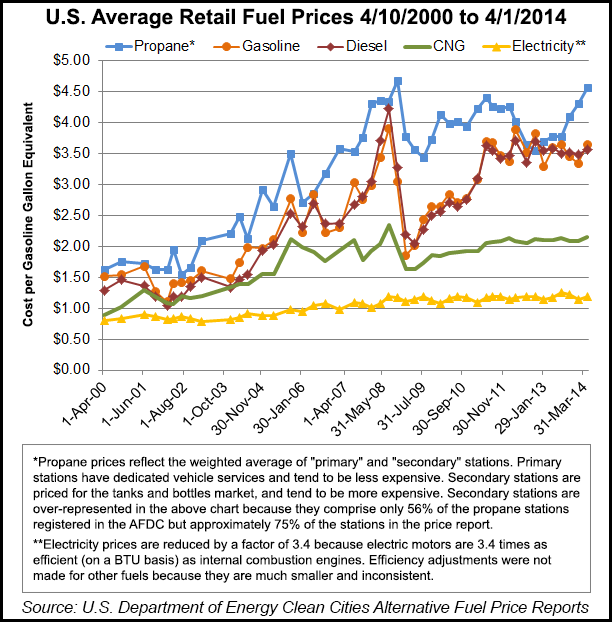 Natural gas and propane interests are expected to account for a good portion of the competition for the funding as again this month the industry continues to advance on various fronts, particularly regarding compressed natural gas (CNG) use in vehicles (see Daily GPI, July 16).

Separately, in Dallas last Wednesday the National Association of Regulatory Utility Commissioners (NARUC), at its summer meetings passed several resolutions, one of which supported state regulatory efforts to expand the use of natural gas vehicles (NGV) by supporting a national standards association’s recommendation to maintain gallon equivalent standards as the official measurement of fuels used in NGVs.

In its Clean Cities funding, DOE expressly is looking for projects that include natural gas and propane, along with plug-in electric and flexible fuel vehicles. Funding is slated to support “seven to 15 deployment projects” in one of three groupings: on-the-road demonstrations, safety-related training, and emergency preparedness.

Applicants are being asked to submit applications through the Funding Opportunities Exchange at the Office of Energy Efficiency and Renewable Energy’s application web portal (https://eere-exchange.energy.gov/).

Ten of the spark-ignition ISX 12-G Cummins Westport engine-equipped trucks are slated for use in California and the other 10 in Washington state. Another Saltchuk company in the marine transportation sector, Tote, is currently converting two large container ships to operate on LNG for the Pacific Northwest, and two new LNG transport ships are being built for Puerto Rico trade.

The new buses, with Type IV CNG fuel cylinders from Hexagon Lincoln and 8.9-liter ISL-G Cummins Westport engines, are scheduled to be delivered in the second quarter next year, and manufacturing will start in the fourth quarter this year, New Flyer said.

While maintaining nearly the same fuel economy, the CNG Cruze will have a 1.8-liter engine with 20 more horsepower of output and 24 foot-pounds of torque over its competitors, Crazy Diamond President Kevin Fern told the alternative fleet sector newsletter Fleets and Fuels.

“This will not be just a conversion [of the Cruze model], but a completely integrated system,” Fern said. The model will have a 8.6 gasoline gallon equivalents fuel capacity.

On the engine technology front, Illinois-based Power Solutions International (PSI) said Tuesday that it has received U.S. Environmental Protection Agency certification for its 8.8-liter engine that can run on both natural gas and propane autogas. The company calls the new engine “cost-competitive and easy-to-integrate” for medium-duty commercial truck and bus fleets.

PSI CEO Gary Winemaster said the new engines are both “cleaner and considerably less expensive” than diesel-powered vehicles in the same operating classes.