The U.S. Department of Energy (DOE) is offering up to $15 million in support for community-based alternative fuel transportation projects, including natural gas vehicle (NGV) programs. 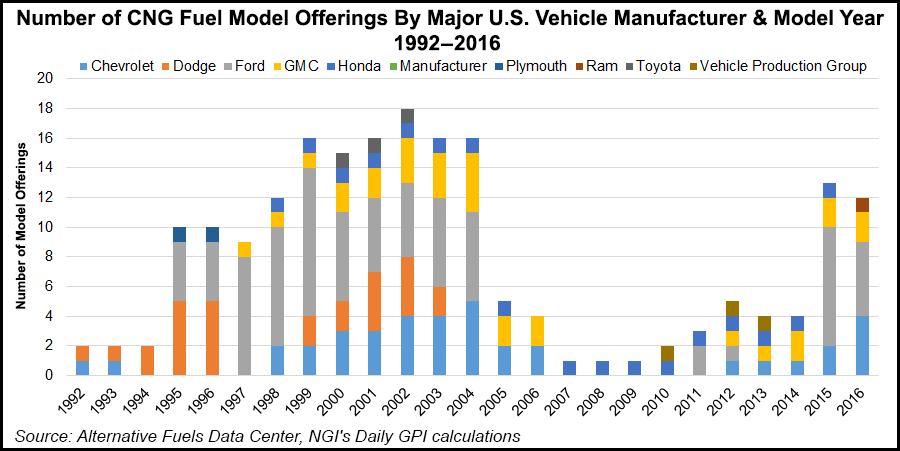 Eligible projects should be aimed at accelerating “the adoption of advanced and alternative fuel vehicles and demonstrating energy efficient mobility systems,” according to DOE.

With an emphasis on light-, medium- and heavy-duty vehicles, the latter two being a focus of NGV expansion, the systems DOE seeks can include “connected and autonomous vehicles as well as new transportation system models.” DOE’s Office of Energy Efficiency and Renewable Energy (EERE) is managing the program, which includes $15 million in funding, subject to appropriations by Congress.

“Led by community-based partnerships between state and local governments and key private sector stakeholders, these projects will help catalyze alternative fuel use nationwide through the collection and sharing of best practices and lessons learned,” DOE said.

“In addition, DOE seeks highly innovative ‘living lab’ demonstration projects that integrate smart mobility technologies in a holistic approach to the movement of people and/or goods that maximizes energy efficiency.”

Additional information and application requirements are available at the EERE website.

In the advancement of NGV engines, joint venture Cummins Westport and its partner Westport Fuel Systems said they are making “significant progress” for both large and small NGV engines with a 6.7-liter dedicated natural gas ISB6.7 G engine offered in three ratings up to 240 hp and 560-foot-pounds of torque. In addition, they said commercialization is near for the parent Westport’s HPDI/high-pressure direct-injection technology for heavy-duty NGV-diesel dual-fuel vehicles by Volvo.

Reports out of Sweden have said Volvo will offer HPDI power with liquefied natural gas (LNG) as the NGV fuel by the end of 2017.

The 6.7-liter Cummins Westport engine has been available since May in Thomas Built Buses for school transportation. “Many customers using school and shuttle buses, medium-duty trucks or vocational vehicles operate within a local area where the return-to-base nature of their operations allows them to use fleet-owned or growing publicly available NGV fueling infrastructure,” Cummins Westport President Rob Neitzke told Fleets & Fuels alternative transportation newsletter.

PSI said it would begin taking orders before the start of the new year. PSI CEO Gary Winemaster said his company is “positioned to get in on the ground floor” as an upfitter for GM’s re-entry into the medium-duty truck market.

With the 5,000 NGVs now operating, Waste Management touts itself as already the nation’s largest private vocational heavy duty fleet user of natural gas. The company has been operating NGVs since the late 1990s.

For every diesel truck it replaces with an NGV, Waste Management officials said they cut diesel fuel use by 8,000 gallons annually. And each NGV cuts greenhouse gas emissions by about 21%, they said.

In the prospective zero emission sector, Salt Lake City-based Nikola Motor Co. has named Ryder Systems as its exclusive distribution and maintenance provider for its still not commercial zero-emission Class 8 truck that it hopes will revolutionize the trucking industry. Originally slated to run on CNG, the Nikola vehicle is now slated to be fueled by hydrogen. A network of 364 hydrogen fueling stations is supposed to be launched in 2018 with the first stations opening the following year.

A natural gas-electric semi-truck Nikola One was rolled out in May. Nikola officials said at the time that they were taking orders for a CNG-electric tractor-trailer truck that would have a range of 1,200 miles and wouldn’t require any plug-in time for recharging.