The Department of Energy (DOE) is looking for proposals to support a vision for large-scale and affordable hydrogen projects to increase production, storage, distribution and utilization across multiple sectors. 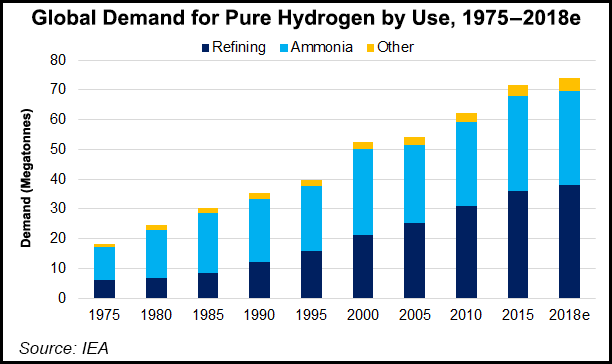 Hydrogen today primarily is used for oil refining and ammonia industries. However, it is emerging as an application for fuel cell vehicles, metals refining and synthetic natural gas production.

According to DOE’s Hydrogen and Fuel Cell at Scale Office, the federal government’s H2@Scale to add projects is a concept that explores “the potential for wide-scale hydrogen production and utilization in the United States to enable resiliency of the power generation and transmission sectors, while also aligning diverse multibillion dollar domestic industries, domestic competitiveness, and job creation.”

The United States now produces about 10 million metric tons/year of hydrogen, nearly all (95%) via centralized natural gas reforming, according to DOE. Gas reforming is a process that builds on the existing gas pipeline delivery infrastructure in large central plants.

Hydrogen also is produced from water splitting, such as electrolysis, and from photoelectrochemical cells or solar thermochemical systems.

The DOE’s request for proposals for research and development (R&D) projects is through the National Renewable Energy Laboratory, DOE’s Hydrogen and Fuel Cell Technologies Office , within the Office of Energy Efficiency and Renewable Energy.

Selected projects need to include at least one of the national laboratories and partners from industry, universities, nonprofits, institutes, codes/standards organizations, associations or other relevant stakeholders.Proposals are due by 7 p.m. ET on July 31. Send technical questions about the proposals via email.