The U.S. Department of Energy (DOE) has awarded $11.5 million in funding for 12 research projects as part of Phase One of the Advanced Research Projects Agency-Energy’s (ARPA-E) FLExible Carbon Capture and Storage (FLECCS) program. 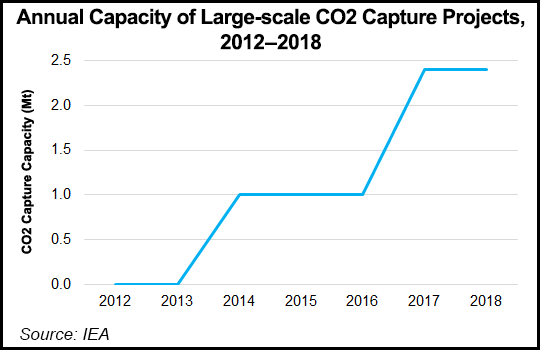 To adapt to conditions in an environment with high variable renewable energy (VRE), FLECCS projects awarded funding are to develop carbon capture and storage (CCS) processes. CCS would allow technologies, such as natural gas power generators, to respond to VRE.

“The FLECCS projects will work to address critical carbon capture and storage needs in our nation’s power systems,” said ARPA-E director Lane Genatowski. “The FLECCS program is intended to enable the next generation of flexible, low-cost, and low-carbon electricity systems, and we are eager to work with these teams to innovate the grid of the future.”

The 12 teams are working to create CCS retrofits to existing power generators in addition to greenfield systems that produce fossil carbon-containing fuel, such as natural gas or biogas, then output electricity. The Phase One teams are to design, model, and optimize CCS processes that allow flexibility on a high-VRE grid.

Additional funding of up to $31 million is to be awarded to teams that move on to FLECCS Phase Two. In the second phase, teams would shift their focus to building components, unit operations and prototype systems in order to reduce technical risks and costs.