With natural gas production topping 5 Bcf/d in the Niobrara formation of the Rocky Mountains, including the Powder River Basin (PRB) of Wyoming and the Denver-Julesburg (DJ) Basin of Colorado, the region is becoming a new center for infrastructure build-out. 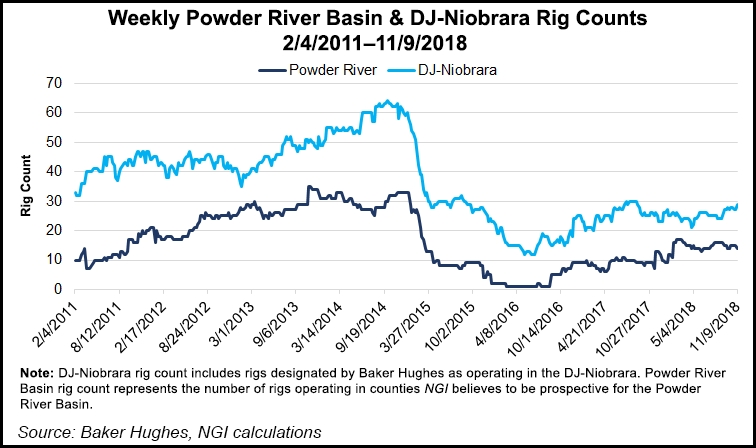 Both of the basins are targeted for additional processing plant and pipeline capacity, according to RBN Energy LLC’s Housley Carr, who discussed the growth in a recent blog post.

Carr’s upbeat analysis comes in the aftermath of an anti-drilling ballot measure that was defeated last week in Colorado. Had it passed, new drilling was expected to dry up throughout the state.

With the ballot off the table, the Colorado Oil and Gas Association (COGA) echoed renewed optimism about the prospects for more energy development.

“While it’s impossible to forecast market conditions with any certainty, the economics and technology around oil and natural gas development are healthy, so we can likely expect additional Colorado-based infrastructure investments heading into 2019,” said COGA CEO Dan Haley. “Those investments are key, so that we can stay ahead of capacity constraints and not limit our opportunities for success.”

In the U.S. Energy Information Administration’s (EIA) latest Drilling Productivity Report issued on Tuesday, Niobrara gas production in December is expected to climb month/month (m/m) to an estimated 5.19 Bcf/d from 5.15 Bcf/d. Niobrara oil output is forecast to increase m/m to 671,000 b/d in December from 664,000 b/d.

With “major crude oil-focused PRB and DJ basin producers planning for expanded crude output in 2019 and beyond, production of associated gas is expected to continue rising,” Carr said.

John Robitaille, vice president at the Petroleum Association of Wyoming (PAW), told NGI‘s Shale Daily that drilling in the region is expected to pick up early next year.

“There may be some open seasons going on, but I’m not aware of steady activity,” said Robitaille of infrastructure additions. He noted there is more pipeline activity underway.

Carr analyzed what midstream infrastructure is in place and what will be coming online, particularly processing critical to natural gas liquids (NGL) movement.

He noted that PRB gross gas production was recently about 750 MMfc/d. The previously dominant coalbed methane supplies are now less than half that total at 340 MMcf/d. Most of the basin’s incremental gas output is from unconventional drilling, and the gas supplies require processing to move NGLs.

Most of the growth is in Wyoming’s Campbell and Converse counties. Carr outlined a number of gas processing plants coming online, with more capacity planned in the two jurisdictions.

About 565 MMcf/d of existing processing could be more than doubled by the end of next year, based on the plans by at least six operators, he said, including Meritage Midstream Services LLC, Tallgrass Energy Partners LP, Jackalope Gas Gathering Services LLC, Western Gas Partners LP, Oneok Inc. and Evolution Midstream LLC.

Earlier this year, a Denver-based spokesperson for DJ pure-play Extraction Oil & Gas Corp. told NGI’s Shale Daily that the company was planning to expand in the DJ. “We bring more innovation to the table and we partner with communities to find ways to develop that work out for everyone,” the spokesperson said, citing an agreement reached last year with Broomfield, CO, officials.

Among the projects in the mix is one by an affiliate of Denver-based Taproot Energy Partners LLC, which in September secured agreements to expand a multi-product midstream system in the DJ. Additional acreage dedications would build out the Weld County, CO, system and support an initial dedication by joint venture partner Bison Oil & Gas II.

SemGroup Corp. and DCP Midstream Partners LP also held a binding open season this year for a transportation project to move NGLs from the DJ to the massive fractionation complex in Mont Belvieu, TX.

In May, another binding open season was held to test support to expand NGL takeaway by 90,000 b/d on the Texas Express Pipeline, also moving from the DJ to the Gulf Coast. The pipeline is sponsored by Enterprise Products Partners LP, Enbridge Inc. subsidiary Midcoast Operating LP, Western Gas Partners and DCP Midstream.

Williams in July stepped up and added the DJ’s “premium growth” to its midstream portfolio through a joint venture with KKR & Co. to buy Discovery DJ Services for $1.173 billion.

Even without all of the new capacity, Carr calculated that there is about 265 MMcf/d of capacity available from existing processing plants in the PRB. Assuming all the new capacity comes online, “PRB processing capacity would top 1 Bcf/d by the end of next year,” he said.