Strong results in hand from the Colorado portfolio and higher expectations in the Permian Basin have led Houston-based Noble Energy Inc. to shift capital from the Eagle Ford Shale through 2020, management said Wednesday. 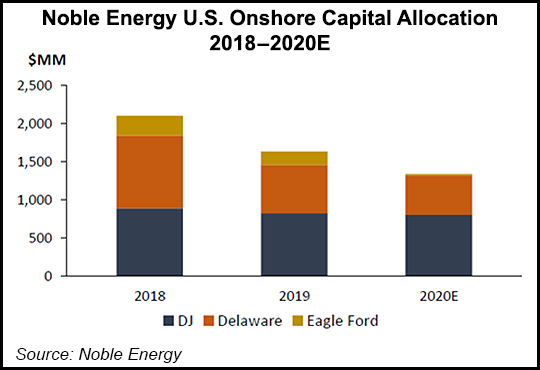 CEO Dave Stover and COO Brent Smolik shared a microphone on Wednesday to discuss fourth quarter and 2019 results. The super independent spent less and produced more last year, boosted on the natural gas side by the ramp in late 2019 of the Leviathan field offshore Israel.

“We actually drove nearly 7% total production growth on 25% less capital,” Stover said. In the Lower 48, total boe production was up 10%, and oil output also climbed 10% over 2018. Organic capex funded by Noble totaled $406 million last year, below the low end of guidance, while gas and oil volumes of 373,000 boe/d were near the top end.

In the U.S. portfolio, Noble improved its unconventional acreage position in the Lower 48 by adding more than 200,000 acres, primarily in Wyoming’s Powder River and Green River basins. However, in the near term, it’s all about the Denver-Julesburg (DJ) Basin in Colorado and the Permian Delaware formation, Smolik said.

Noble produced 285,000 boe/d overall from the U.S. onshore, led by record output from the DJ, the COO noted.

“Our 2019 execution success has also shaped our thinking about capital allocation for 2020,” he said. Total capex this year is set at $1.6-1.8 billion, with close to $1.3 billion allocated for the U.S. onshore. Sixty percent of the U.S. onshore spend would be directed to the DJ, with 40% for the Delaware.

DJ growth is projected to offset a retreat from the Eagle Ford, where natural gas liquids (NGL) and gas production are in decline.

“We expect this capital plan to deliver moderate onshore oil growth as production increases in the more oily DJ assets and offsets decline in the NGLs and natural gas in the Eagle Ford,” Smolik said. “All three U.S. basins are designed to generate free cash flow in 2020.”

Last year, the DJ delivered 20%-plus growth over 2018, with reserve additions of almost 27 million boe. Operating costs, meanwhile, were down more than 15% year/year, with record lows in the fourth quarter, he noted.

In the first quarter, Noble plans to run three rigs and two fracture crews in the DJ that target about 20 turned-in-line (TIL) wells. There are political ramifications of the keep-it-in-the-ground crowd in Colorado, but Noble’s drilling permit inventory in hand provides “clarity” for about “two more years of drilling activity,” Smolik said.

In the Delaware, meanwhile, production last year jumped 25% year/year, which the COO credited to improved consistency in row development, while completions efficiencies reduced well costs by 20%-plus. Lease operating expenses also fell, down by more than 30% on a per-unit basis.

“In my experience, it is rare to see such dramatic year/year improvements in an asset, and it would be difficult for us to replicate the magnitude of the 2019 improvements,” Smolik said. “However, we still expect to see cost structure and well performance gains in the Delaware again in 2020.”

For example, in 4Q2019, four wells were completed in the southern portion of the Delaware, with 30-day initial production rates averaging 200 b/d of oil/1,000 feet, or 260 boe/foot, Smolik said.

“Those great results demonstrate how we can further improve well performance with optimized landing zones and customized completion designs. As we apply those ideas and techniques across the acreage position, we expect to see improved well performance, increased capital efficiency and even better returns in 2020.”

Noble plans to run two rigs and two fracture crews in the Delaware through March. It also expects to have around 15 TILs in the Eagle Ford, which continues to be a “considerable cash flow generator,” despite declining output.

Similar to 2019, Noble expects to drill and complete 110-120 wells in the DJ and 50-60 wells in the Delaware. No new drilling or completion activity is planned for the Eagle Ford. As compared with 2019, average well costs this year in the DJ and Delaware are expected to be down about 10%.

Delaware spend this year includes $35 million for line fill associated with the Permian-to-Texas-coast Epic Crude Pipeline startup, expected by the end of March. About 60% of the U.S. onshore spend is targeted for the first half of the year.

U.S. onshore volumes should be “substantially higher in the second half of the year, reflecting the timing of wells commencing production,” management said. “The second quarter is anticipated to be the highest quarterly TIL count for the year, with peak U.S. onshore production in the third quarter.”

Last year, Noble replaced 233% of production at slightly more than $7/boe development cost, Stover said. U.S. onshore proved developed reserves were added at under $8/boe. The operator expects to generate at least $200 million in organic cash flow this year at the upstream level.

Noble is “prioritizing free cash flow generation over U.S. onshore growth in 2020,” said the CEO. “Conventional major project developments, where we have a deep lineup of low-cost discovered resources, along with a return to exploration drilling, provide significant catalysts for our company this year as we build long-term value.”

Offshore development capex for this year is set at $275 million, significantly lower than 2019 as costs for the Leviathan field, which started up offshore Israel in late 2019, were concluded. Two-thirds of the offshore spend is to be deployed in West Africa to progress the natural gas monetization project at Alen in Equatorial Guinea. The remaining one-third is for Israel, primarily for pipeline expansion work related to meeting contracted regional demand growth and finalizing Leviathan phase one development.

The offshore portfolio was “clearly punctuated by the startup of Leviathan at year-end,” Smolik said. “As we signaled, we expect demand and Leviathan to be the growth engine for the company in 2020.”

Since the startup of production offshore Israel, the Leviathan and Tamar fields combined on peak days have exceeded 1.8 Bcf/d. Noble also has opened markets in the region for gas exports into Jordan and Egypt.