Colorado’s biggest oil and gas producer appears on track to complete its dominance of the Denver-Julesburg (DJ) Basin before year’s end, the CEO of Bonanza Creek Energy Inc., soon to be Civitas Resources Inc., said earlier this month. 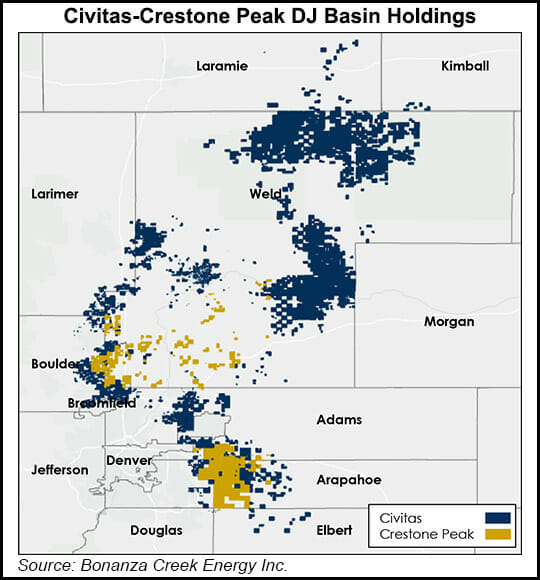 CEO Eric Greager held court during a conference call to discuss the Denver-based independent’s second quarter results. He spent most of the hour sharing insight into how the management team spent the spring deep into merger and acquisition activity.

Bonanza began 2Q2021 by completing its takeover of crosstown peer HighPoint Resources Corp. In May it agreed to buy Extraction Oil & Gas Inc., another DJ peer. One month later, the combination with Denver-based Crestone Peak Resources was announced.

When all is said and done,  the independent is to be rebranded as Civitas and command more than half a million net acres in the state, with an estimated production base of 160,000 boe/d.

“It’s not complicated,” Greager told analysts during the conference call. “It’s not complex. But it takes a great deal of time and energy” to combine the companies. “This will be a new company entirely.”

A lot of the front-end effort is the organizational structure, as various teams are evaluated to determine their strengths and talents, Greager said.

“Having accomplished the HighPoint synergy savings ahead of schedule, and the cultural integration ahead of schedule as well, I have got a great deal of confidence in our team’s ability to both put this together quickly and execute the close and transition swiftly and without any excess friction.”

Even with the hullabaloo in activity, “it was a very positive second quarter for Bonanza Creek.”

“Our margin was the highest in over three years, at almost 70%,” Greager said. The synergies achieved with combining Bonanza and HighPoint “are exceeding our expectations, and we are now deep into planning the integration” of merging the operations of Extraction and Crestone.

During the second quarter, the three companies that would form Civitas produced on average a total of 162,300 boe/d, with Extraction volumes estimated at around 76,600 boe/d and Crestone at 43,400 boe/d.

Exploration companies working in Colorado have faced pressure in recent years from state and municipal regulators, as well as environmental groups. Greager noted that Bonanza had submitted “dozens” of oil and gas drilling permit applications that remained outstanding.

“And we have got very open channels to the regulators and to the municipalities. We have got great relationships all along the western corridor through the Crestone Peak and Extraction community relations team, government relations teams and regulatory teams.”
For the Crestone assets in the Watkins area farther south, the management team also is “confident in our relationship” to be able to generate more permits.

“The combined company has 300 permits approved right now in inventory and that will take us well into 2022 and beyond,” Greager said.