PDC Energy Inc. again plans to invest heavily in its Denver-Julesburg (DJ) Basin properties in northeastern Colorado this year, as it continues to delineate its position and tweak completion designs in the Permian Basin of West Texas. 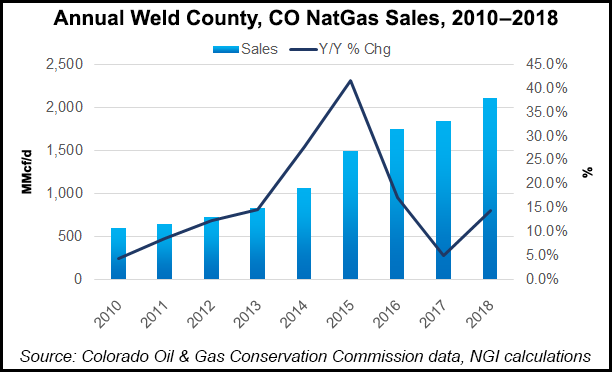 This year’s plans should set up PDC to spend $825-925 million in 2020, when it again expects to grow annual production by 15-20%, according to its preliminary outlook.

In the Delaware, PDC continues to test methods in the various Wolfcamp Shale intervals. It plans to modify its completion design in the sub-basin by slightly reducing the amount of proppant per foot, while increasing the average distance between completion stages to help lower well costs.

The company dropped a completion crew in the Delaware in October. Combined with the timing of third-party gas processing expansions in Colorado, the company said those factors would likely lead to a sequential decline in 1Q2019 production before volumes begin to steadily grow through the rest of the year.

The midstream constraints PDC wrestled with in Colorado last year began to ease as 2018 came to a close. COO Scott Reasoner said last week during a call to discuss year-end earnings that a new processing plant brought online by DCP Midstream LLC helped lower line pressure in the Wattenberg, which helped push up production.

Management said 4Q2018 results included a $264 million impairment for the Delaware leasehold. Reasoner said the company’s position in the play, primarily in Culberson County, TX, declined from 51,000 acres to 42,000 acres when leases expired. The land has “a pretty immaterial impact” to the company’s core areas. The Delaware operations are focused in parts of Culberson and Reeves counties.