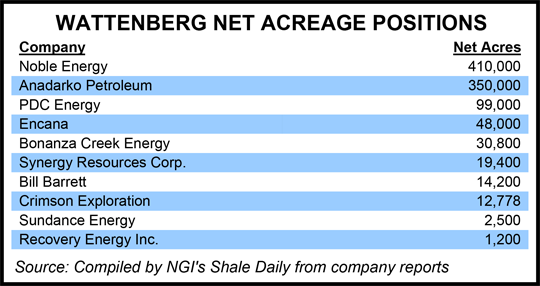 During the second quarter, Synergy completed and brought into production 22 vertical wells in the Wattenberg. Of these, 20 were completed in the Codell formation, one commingled in the Codell/Niobrara, and one in the Greenhorn formation. Six of the wells were brought into production during December and January while the remaining 16 came online during the third week of February. Synergy has a 100% working interest in the wells.

“We continue to achieve 100% success rate in our vertical drilling program. All twenty seven wells we drilled and completed in this fiscal year’s program are now in production,” said Craig Rasmuson, vice president of operations. We look forward to beginning our operated horizontal drilling program in the third and fourth quarter.”

Synergy and Vecta plan to acquire new proprietary seismic data across a portion of the oil and gas JV leases. Synergy will drill a horizontal well on one of the leases to evaluate either the Greenhorn or Niobrara Shale, the company said, and will also conduct other exploration projects in the area covered by the leases as may be mutually agreed upon. The JV contemplates an initial Greenhorn well by Oct. 31.

With the JV, Synergy’s net acreage position in the Wattenberg Extension Area has increased by thirty six percent (36%) to approximately 19,400 acres.

“The Extension Area is rapidly becoming one of the most actively drilled areas of the DJ Basin, and recent results announced by other operators are exhibiting compelling returns on invested capital,” said Synergy CEO Ed Holloway.