Alabama-based Diversified Gas & Oil plc again hit the radar this month in southern Appalachia, acquiring an old, weathered package of 5,000 legacy wells and the thousands of miles of pipeline that serve them for $183 million. 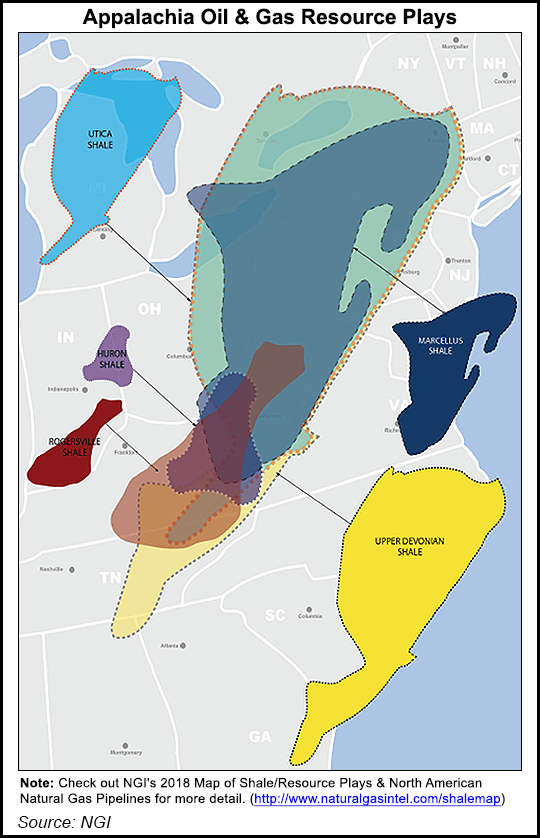 The assets came with Diversified’s purchase of Core Appalachia Holding Co. LLC in a cash and stock deal. It was the latest in a string of similar acquisitions targeting older assets.

“Most people would not do what we do,” CEO Rusty Hutson said during a recent interview. “We love it. We love the fact that no one is paying attention to what we’re doing, or cares about what we’re doing. But at the end of the day, we’re producing natural gas and oil just like everybody else is, and it’s being sold at the same prices, it’s being sold to the same pipelines. It’s just a different asset that’s producing, that’s all.”

The strategy has had some onlookers scratching their heads.

“They keep buying this old production. All it does is decline year after year,” said Mark Cline, president of the Pennsylvania Independent Petroleum Producers Association, which represents small legacy producers in the state. “I’ve been told they’re not interested in drilling new wells and that just doesn’t make any business sense to us.”

Cline isn’t alone in his observation, which makes sense given a market that’s widely driven by the ambitions and deep pockets of larger unconventional producers looking for the next big play to attract more cash. But for Diversified it would seem, one man’s trash is another man’s treasure. And management is interested in drilling wells, but it just hasn’t seen the need to as of late.

After nearly 18 years in business, Diversified has amassed a position that includes 60,000 wells across millions of acres in Kentucky, Ohio, Pennsylvania, Tennessee, Virginia and West Virginia. It now has more than 10,500 miles of pipeline as well. Since February 2017, when the company launched as a public entity on the London Stock Exchange’s AIM market for small growing companies, it has spent roughly $1 billion on acquisitions, cutting deals with EnerVest Ltd., Titan Energy LLC, CNX Resources Corp., Alliance Petroleum Corp. and EQT Corp.

Diversified’s Appalachian assets produce about 540 MMcfe/d gross, of which roughly 480 MMcfe/d is net to the company. Similar to the upstream master limited partnership model that was once more dominant, Diversified views its business as consistent, low-risk, high-reward, relying on a balance of low operating expenses and long-life production to drive high margins and returns for shareholders in the form of a regular dividend.

The company has drilled about 150 wells since it was founded in 2001. Hutson said Diversified is mulling whether to drill next year in shallow oil plays throughout the basin, such as the Big Injun formation, the Clinton Sandstone or the Berea Sandstone. In the meantime, management does not see a shortage of acquisition opportunities. Instead, Hutson said as the unconventional era evolves in Appalachia, older shale wells could be a perfect match for Diversified’s business model.

“We really don’t care, it can be conventional or unconventional,” Hutson said when asked what assets the company targets. “We operate several hundred Marcellus Shale wells that have essentially been in production for five or six years and haven’t really hit their terminal declines and will sit there doing what they do for the next 25 or 30 years.

“Up to this point, what we have found is that most of the opportunities have been on the conventional side,” Hutson added, saying most of the company’s portfolio has a 50-year life span. “What we’re also starting to see is that there is some interest levels in divesting mature producing shale wells.”

Considering the high expenses of larger independents in the region and other opportunities they might have in their own inventories, Hutson believes some older unconventional wells will increasingly become less desirable to certain operators.

“I really start to see them being the next round of consolidation for us in terms of being able to monetize for the large companies — let them put it back into the drillbit — and for us, it’s about operating these kinds of wells and becoming as efficient as possible in doing it,” Hutson said.

Indeed, more noncore asset packages have come onto the market in recent years as Appalachian producers consolidate the basin, block-up acreage and focus more intently on core assets. While many of those packages have largely included unproven properties, it’s only a matter of time before more proved developed producing (PDP) reserves are sold, said Williams Capital Group analyst Gabriele Sorbara.

“It’s essentially a function of balance sheets, Range Resources, Southwestern, all these guys have distressed balance sheets and they’re trying to focus on their core acreage and monetize assets that just don’t fit the portfolio, especially when they can bring in proceeds and improve their leverage metrics,” he said, referring to Southwestern’s recent $1.9 billion sale of legacy assets in the Fayetteville Shale and smaller noncore sales by Range across the country in recent years.

“All these companies, they move on to the next big thing,” Sorbara said during an interview. “At some point, you have to sell that PDP wedge once there’s no more growth associated with that. It’s just kind of a blow down and you sell it at PDP value, you’re not really selling the upside. But Diversified really isn’t drilling wells, so they’re looking for that PDP portion.”

Cline noted that for many smaller companies operating older assets, especially family-owned businesses, the last few years haven’t been easy thanks in part to low commodity prices, more regulatory scrutiny and increasing costs. That’s prevented many of the smaller operators, including Cline’s family business, which is owned by his father, from drilling new wells in the region’s older fields.

“Anybody that’s in business, and I’m in four generations, will tell you that if you don’t keep drilling your production will keep dropping off to the point that you’re not going to make money,” Cline said.

Scale has enabled Diversified to stay profitable even without drilling consistently. As it’s layered in more upstream and midstream assets, it’s become more efficient at operating them, Hutson said.

The company also has become more successful after going public overseas. Hutson said he knew years ago that Diversified would need more access to capital. Explaining his decision to go public in London, Hutson said the company wasn’t “big enough for the U.S. market” and other options like private equity and bank lending weren’t attractive.

At the time of its offering last year, Diversified was the first exploration and production company to go public on AIM since 2014, which London-based company spokesman Ben Romney said has attracted interest from investors. BlackRock, Capital Group and Fidelity Investments are now among its largest shareholders. The additional capital has helped drive the company’s strategy.

“The last few years have been spent mostly on acquisitions simply because the internal rate of returns that we’ve recognized on acquisitions have been significantly higher than on the drill bit,” Hutson said, adding that while the company will continue to target properties in Appalachia, it has not ruled-out expanding elsewhere in the country.

Dan Weaver, executive director of the Pennsylvania Independent Oil and Gas Association, said Diversified’s interest in older assets could bode well for some struggling companies in the region.

“For a variety of reasons, it’s good because a lot of times those companies, if they don’t sell out to somebody, we’ve seen a lot of times if someone passes away, or retires, there’s no one there to take on the wells, then what happens?” Weaver said. “Diversified is at least breathing some life back into these older wells.”

But all the old wells Diversified is acquiring has also generated concern among regulators, particularly in Pennsylvania. The state Department of Environmental Protection in July ordered CNX Resources Corp., XTO Energy Inc. and Alliance Petroleum Corp. to plug more than 1,000 abandoned wells across the state. Alliance is now a Diversified subsidiary, while both XTO and CNX noted that the wells in question that they once owned are now owned by Diversified.

“If they get the wells, produce them, do what they’re supposed to do, it’s a good thing” for the region,” Cline said of Diversified’s potential liabilities in acquiring older assets. “But if they just up and walk away, it’s terrible.”

Hutson, a West Virginia native whose father, grandfather and great grandfather all worked in Appalachian oil and gas fields, acknowledged the concerns. He said his company factors plugging costs into its acquisitions and stressed that “we’re in a constant plugging program,” with each well costing roughly $15,000-25,000 to close.

“We’re not just some small fly-by-night company that’s looking to leave plugging liabilities with the state,” Hutson said. “We’re fully aware of what that plugging liability is and fully intent on addressing it as we go.”