If growth projections are expected to be realized for liquefied natural gas (LNG) in the coming decades, more must be done to ensure its role in displacing coal and aiding the energy transition, according to some experts. 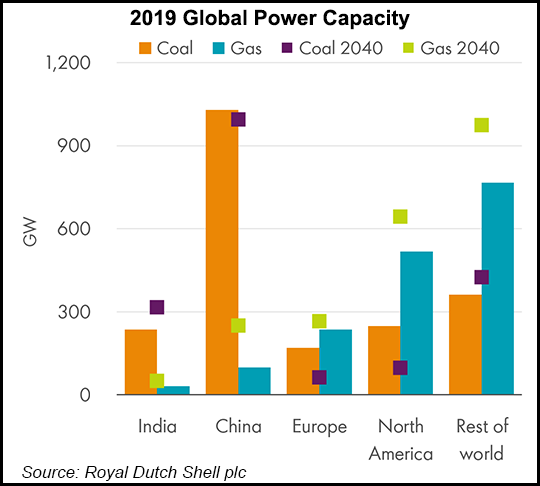 The Asian market is seen as a key to LNG’s future growth and a global goal of reducing emissions and curbing climate change, but speakers at the Gastech Virtual Summit agreed there’s a long way to go.

Hill said if only 15% of Asia’s coal capacity — most of which was built in the past 20 years — is displaced by gas by 2030, it would increase gas-fired power generation by 50%.

“It’s not our baseline,” Hill said of Shell, the world’s largest LNG trader, “but it’s consistent with our belief that there is still a lot of upside in this industry.” He also noted that policy changes in big importers including Japan and South Korea show momentum is building to limit the amount of coal-fired generation capacity in the region.

In its annual LNG outlook, Shell found that global demand for the super-chilled fuel grew by 12.5% last year to 359 million metric tons (mmt). Despite the Covid-19 pandemic, growth continued through the first half of 2020, increasing by about 5% year/year, Hill said. Shell expects demand by 2040 to double to 700 mmt.

Overall, Asia is forecast to remain the dominant region for LNG consumption in the decades ahead, with South Asia and Southeast Asia generating more than half of the increased demand projected by the company.

Higher gas use in Asia is imperative to limiting climate change and reaching net zero emissions by 2050 as the United Nations’ Intergovernmental Panel on Climate Change has stressed, said Mitsubishi Corp.’s Jun Nishizawa, CEO of the Japanese trading house’s natural gas group. He stressed that the emissions target is a “major global trend” that no country can ignore.

“We know this is a tough and idealistic task, but having and sharing the same goal with all stakeholders is required,” he said.

Immediate action is needed to accelerate switching from coal and oil to natural gas in Asia, Nishizawa noted. Ammonia and hydrogen could be mixed with coal-fired and gas-fired generation, respectively, to further curb emissions, he added.

Novatek CFO Mark Gyetvay, a top executive with Russia’s largest independent gas producer and its biggest LNG exporter, said the company recognizes the imperative for more gas use in economies across the world. Novatek is targeting an LNG production goal of 70 million tons by 2030 from its Arctic projects on the Yamal and Gydan peninsulas. He added that Novatek estimates that slightly more than 60 million tons/year of LNG could replace 152 million tons of coal worldwide.

“We’re also conducting studies on the prospects of technically and economically producing hydrogen from methane, both for our own corporate needs as well as delivery to consumers with carbon offsetting mechanisms” and zero carbon dioxide emissions, he said.

One thing is clear, Gyetvay said, LNG prices must remain low in order to continue incentivizing its use, particularly in developing countries.

“If we come to an era again where price is high, $8-12.00/MMBtu, then we’re not going to make that transition from coal to gas,” he said. “I think price is an important determinant to ensuring that this transition occurs, because if we don’t have a reasonable, sustainable price” there will always be competition between the two fuels.

However, CPC Corp.’s Jane Liao, CEO of the natural gas business, said demand from buyers could still remain strong in the face of higher prices. CPC, Taiwan’s state-owned oil and gas company, will need to purchase an additional 60 cargoes this year on the spot market in addition to long-term supplies despite the pandemic.

In Taiwan, the world’s fifth largest LNG importer, 80% of the gas is used for power generation. Lia said there will likely be a strong need for long-term supplies as production growth is expected to level off with new LNG projects nearing completion and others delayed.

“Long-term supply/demand dynamics really need to be kept in check and kept in mind in terms of where the supply is coming from,” said ExxonMobil’s Irtiza Sayyed, president of LNG market development. “And I do think, given the fact that we’re in a long-cycle business, that we have always had to innovate. The industry has innovated over decades in identifying new outlets for LNG.”

He added that if LNG producers and sellers expect use of the fuel to match or exceed growth expectations, then they must better support the gasification of the Asia-Pacific region in particular. Sayyed estimated that if gas use increased by 1% in China alone, it would equal 13 million tons of LNG. Gas currently accounts for about 8% of the country’s energy mix.

“From a producer’s perspective, a significant emphasis is to help the government and the regulators understand the value of gas as part of the energy mix,” Sayyed said during the panel discussion.

Mitsubishi, which has LNG production stakes and trading activities worldwide, is doing that and actively working to expand its use in underdeveloped markets that include Bangladesh, India and Pakistan. Nishizawa said Mitsubishi has established a company to become the supplier of choice in Pakistan, where it’s also working to become a major owner of import terminals, pipelines and downstream operations.

“As everybody agrees, price is an important factor to encourage the use of LNG, particularly in developing countries, it has to be affordable, it has to be sustainable,” Nishizawa said. However, commercialization and the development of downstream infrastructure is equally important in emerging markets, he added.