All it took was one little storage datapoint for natural gas futures – down another 50-plus cents early Thursday – to stage a momentous recovery and finish the day well in the green. The July Nymex gas futures contract settled at $8.963/MMBtu, up 26.4 cents from Wednesday’s close. August futures edged up 29.9 cents to $8.978. 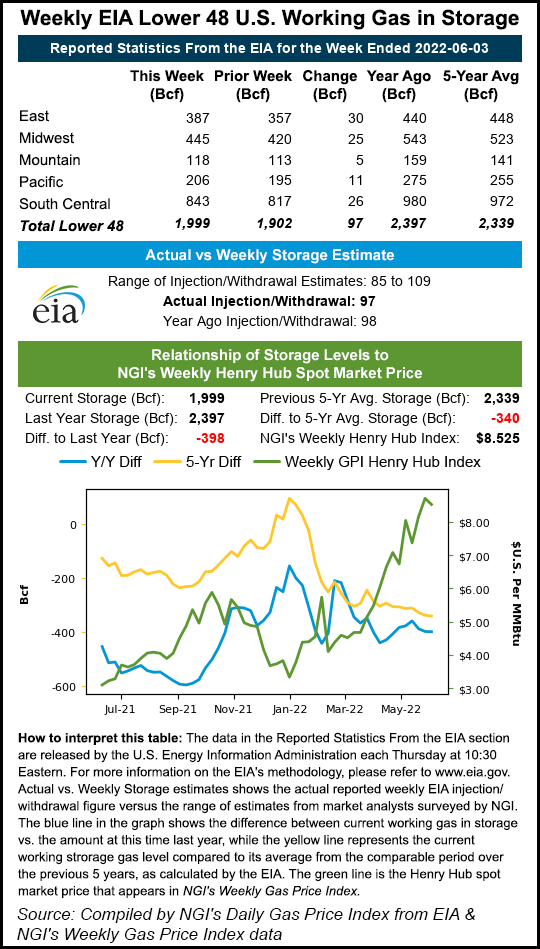 Spot gas prices followed the early lead of futures, plunging more than $1.00 across most of the country. NGI’s Spot Gas National Avg. plummeted $1.180 to $7.860.

Notwithstanding an intensifying heat wave spreading across the West and into the South Central part of the United States, the explosion at the Freeport liquefied natural gas (LNG) terminal on Quintana Island, TX, continued to dominate markets on Thursday. Futures were down sharply early in the session on word that the facility would remain shut down for at least three weeks, slashing 2 Bcf/d of gas demand from the market.

Tudor, Pickering, Holt & Co. (TPH) analysts said a 2 Bcf/d outage over a three-week period would amount to 40-45 Bcf added to balances. However, with prices off about 50.0 cents before 10:30 a.m. ET, this suggested the market was pricing in the risk of an extended outage.

Bespoke Weather Services analysts agreed and said while a three-week outage would be “pretty inconsequential,” an outage of several more weeks would become “quite material.”

The latest storage data quickly flipped the script, though, as traders were left disappointed that a triple-digit injection appears not to be in the cards this injection season. The Energy Information Administration (EIA) said inventories for the week ending June 3 increased by 97 Bcf, in line with projections ahead of the report but a few Bcf below high-end estimates and the coveted 100 Bcf mark.

Total working gas in storage rose to 1,999 Bcf as of June 3, which is 398 Bcf below year-earlier levels and 340 Bcf below the five-year average, according to EIA.

Ahead of the report, the median of 12 estimates submitted to Bloomberg as of early Thursday was a 98 Bcf injection, with build estimates ranging from 85 Bcf to 104 Bcf. Reuters polled 14 analysts, whose estimates were as high as 109 Bcf. That poll showed a median increase of 94 Bcf. A Wall Street Journal poll produced an average build of 97 Bcf.

Broken down by region, East inventories climbed by 30 Bcf and Midwest stocks rose by 25 Bcf, according to EIA. South Central inventories were up 26 Bcf, including a 24 Bcf build in nonsalt facilities and a 3 Bcf injection into salts.

However, several market observers participating in the post-EIA report chat pointed out that the Freeport outage would likely pad stocks a bit more over the next three weeks. It is also the only liquefaction facility in the United States, and one of only two export terminals in the world, that uses electric motors instead of natural gas turbines to drive liquefaction compressors, according to EIA.

Ahead of the incident, feed gas nominations for Wednesday on the pipelines serving the facility were slightly above 2 Bcf, according to NGI’s U.S. LNG Export Tracker. That’s near the terminal’s operational feed gas capacity of 2.6 Bcf/d.

Since the event caused no casualties, and the fire was quickly brought under control, there is reason to believe Freeport could begin taking feed gas again in July, said Mobius Risk Group. However, the firm acknowledged that the swift price response to the blast offered a glimpse of what could become a more frequent dynamic through hurricane season.

“While the market is still grappling with the reality that an adequate refill before next winter may prove to be a challenge, there is an ever-present threat that sharply reduced LNG feed gas demand will temporarily put a material dent in what is an otherwise bullish backdrop,” Mobius analysts said.

The National Oceanic and Atmospheric Administration’s (NOAA) Climate Prediction Center recently said forecasters were predicting above-average activity this year. It would mark the seventh consecutive above-average hurricane season. The forecast calls for 14-21 named storms, of which six to 10 could become hurricanes. An estimated three to six could develop into major hurricanes.

Though not as prevalent in the shale era, there also is a bull case in the event of a hurricane. Last year, Hurricane Ida knocked most Gulf of Mexico oil and gas production offline for more than 10 days, contributing to low U.S. storage inventories heading into the winter.

Meanwhile, Mobius said it’s important to keep in mind that the lost source of demand from Freeport for the domestic market is concurrently a loss of supply for Europe and Asia. While Henry Hub got hit hard in response to the news, neither Dutch Title Transfer Facility (TTF) nor Japan Korea Marker were materially higher.

“The market is likely to respond swiftly and sharply as more information/clarity is had in regards to the duration of the outage at Freeport,” Mobius analysts said.

TTF shot skyward on Thursday, ending a six-day losing streak as buyers looked to replace the lost Freeport cargoes. The plant supplies roughly four or five cargoes each week, according to data and analytics firm Kpler. The facility has long-term supply contracts with buyers in Japan and South Korea, along with a trading house and major portfolio players that serve demand across the globe. TTF gained nearly $1.50 to finish above $26/MMBtu Thursday.

Spot gas prices nosedived on Thursday, following the early lead of Nymex futures. Some pullback was to be expected, though, given the dramatic rally over the past three sessions.

That said, there remains significant heat in the forecast, and power demand records are poised to be broken. In Texas, with temperatures forecast to hit the triple-digits across several major cities in the coming days, not even the Freeport outage was likely to prevent records from falling.

The Electric Reliability Council of Texas (ERCOT) said power consumption could hit 76,163 MW on Friday, easily surpassing the current all-time demand record of 74,820 MW set on Aug. 12, 2019. Notably, even with weekend demand usually lower, ERCOT expects peak power usage to remain above 76,000 MW through Tuesday. The highest projection is for Monday, when demand is expected to hit 76,815 MW.

The record-breaking heat is forecast throughout the Southwest, Great Basin and Southern Plains as well. The National Weather Service said overnight temperatures into the upper 70s and low 80s would offer little relief for much of the impacted region. The bulk of the above-average temperatures is to shift out of the Southwest and into the Great Plains by Sunday, with highs into the upper 90s potentially reaching as far north as Nebraska.

Northeast locations were lower as well, though demand in the region is expected to be light. Forecasters said showers along a mid-level shortwave would progress across the Midwest and Ohio Valley on Friday before spreading across the Mid-Atlantic on Saturday.

Temperatures, meanwhile, would top out in the mid-70s and low 80s from Pennsylvania through the Delmarva Peninsula. New England would struggle to get out of the mid-70s.