The oilfield services (OFS) sector has been looking for a break, brought low for several quarters by reduced exploration and development spending and further upended by Covid-19, but it’s expected to be a long, hard slog before activity moves into high gear. 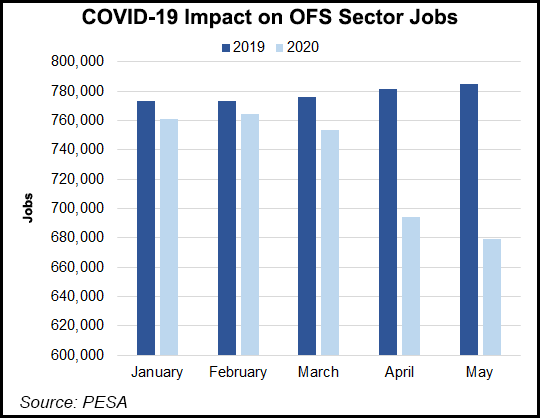 Meanwhile, the jobs picture for the energy industry, and in particular the OFS sector, is grim. Rystad Energy estimated earlier this month that more than 100,000 oil and gas jobs across the United States had been lost, most within OFS.

The Petroleum Equipment and Services Association (PESA) put a finer point on those numbers in a new report about lost jobs related to the pandemic, noting employment in the domestic OFS sector fell by nearly 15,000 jobs in May, bringing total job losses in only a few months to more than 84,000.

Employment across the OFS sector in the United States fell in May by an estimated 105,000 jobs from May 2019 to “its lowest point since 2017,” PESA researchers said.

Using Bureau of Labor Statistics (BLS) data and in collaboration with researchers from the Hobby School of Public Affairs at the University of Houston, PESA’s team estimated U.S. job losses declined about 11% from February through May, from 764,189 to 679,281. The biggest shock was in April, with 59,666 jobs lost.

Compared with May 2019, employment last month fell year/year by 13.5%, from 785,106 jobs to 679,281, according to the trade group. PESA represents industries involved in, among other things, oilfield equipment manufacturing, drilling, well completions and pressure pumping.

Because of the limits in BLS data and the “difficulty of accurately tracking and categorizing furloughs, this analysis likely is significantly underestimating actual job losses within the OFS sector,” researchers said. “Many OFS companies have 25-50% of their workforce currently on furlough. Some of the largest companies in the sector expect to lay off thousands in the near future.”

The job losses “could jeopardize the energy supply chain by draining the sector of the innovative men and women who develop technologies that increase efficiency, improve environmental performance and reduce greenhouse gas emissions.”

Evercore ISI analyst James West and his team focus research on the OFS sector. The industry is expected to hit bottom as the “shallowing of the U.S. land rig count declines,” he said.

Still, every OFS management team “should also be planning for a smaller U.S. land market on the other side of the downturn and what that means for them in terms of less equipment, supporting basins from further away, accelerating technology adoption and how much labor is needed to support a smaller market,” West said.

Evercore is forecasting activity to improve slightly in 3Q2020. There are “signs of stabilization coming relatively quickly,” West said, but “some will question if the downturn will last long enough to really force capacity out of the market. If it doesn’t, then the North American land market will not earn a return above its cost of capital and value destruction will continue.”

Evercore did a deep dive across its covered onshore operators and reviewed how the domestic rig count declines are shallowing. For the week ending June 12, the U.S. land rig count fell by single digits “for the first time since the downturn accelerated in mid-March,” West noted.

“This pickup will likely be temporary as operators start to exhaust budgets by the start of the fourth quarter,” West noted. “We believe much of the early pickup in completion work has been more focused on single well pad completions.”

Globally, OFS demand appears to be struggling as well, as consumption measured in the total value of E&P purchases, “is set for a massive 25% yearly drop in 2020” because of Covid-19, according to Rystad Energy.

Spending is not expected to return levels in 2019 of $639 billion. However, well services and pressure pumping may first see improvements.

“Despite the recovery in oil prices, it will take many quarters before all segments of the supply chain see their revenues deliver consistent growth,” said Rystad’s Audun Martinsen, head of Energy Research. “At best, there will only be certain regions and service segments that will see their revenues grow consistently. For the whole supply chain to recover, we will likely need to wait until after 2023, when we expect service purchases to return to their 2019 levels.”