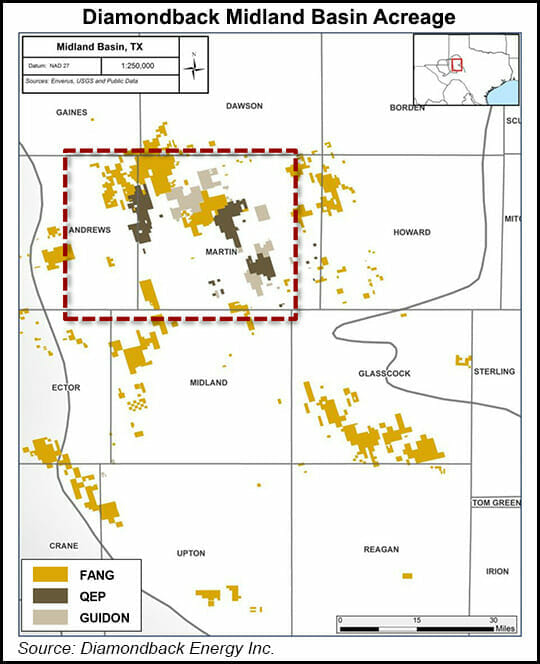 The bulk of production is slated to be in the Permian, with about 12,000 b/d of oil output, or 19,000 boe/d, to come from Williston Basin assets acquired from QEP. Diamondback has said it may divest the Williston assets.

“While commodity prices have improved, global spare oil production capacity remains high as global oil demand recovers from the pandemic,” Stice said. “Diamondback continues to see no need to grow oil production into this artificially undersupplied market, and instead plans to generate free cash flow to pay our dividend and pay down debt.”

A number of publicly listed Lower 48 operators have disclosed plans to keep production flat this year as they face pressure from investors to deliver returns over growth. Permian operators including Diamondback, ConocoPhillips and Pioneer Natural Resources Co. have in recent months called on their peers to practice discipline in the face of improving prices.

This year, Diamondback plans to spend $1.60-1.75 billion on capital projects, compared with previous projections of $1.35-1.55 billion. Stice said the revised guidance represents a 10% reduction in the standalone budget for 2020.

Diamondback also provided figures on its 1Q2021 performance, logging average oil production of 184,200 b/d, or 307,400 boe/d. The figures were affected by the Arctic freeze that caused Texas production to collapse in February, but Stice said output rebounded quickly.

The CEO previously said the storm downed Permian production for several days, but the company expected to make it up during the year.

The company expects to report total hedging losses of $102 million in the first quarter, including $80 million of realized gains from the early termination of interest rate swaps.

The Department of the Interior (DOI)’s Bureau of Ocean Energy Management (BOEM) on Friday issued a five-year proposed program (PP) for offshore oil and gas lease sales during 2023-2028, although Interior Secretary Deb Haaland noted this does not necessarily mean lease sales will occur. DOI is calling for a maximum of 11 lease sales for…