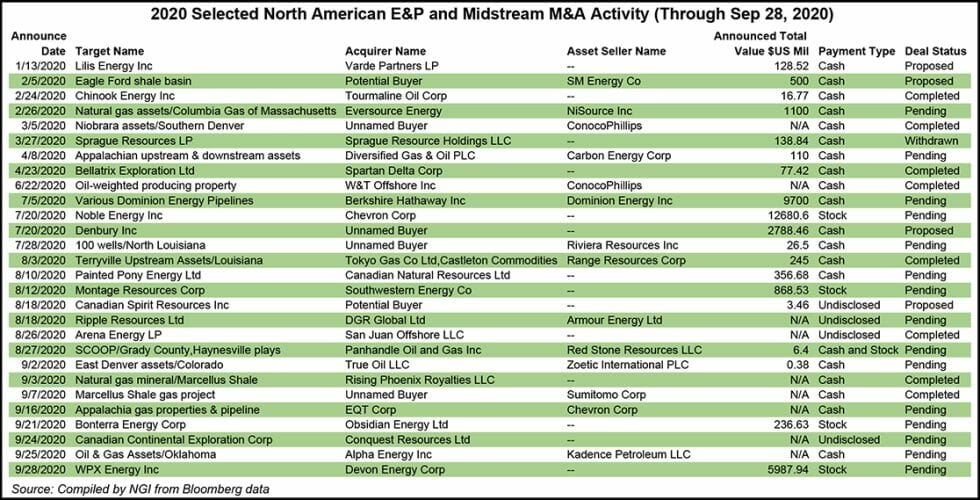 Lower 48 giants Devon Energy Corp. and WPX Energy Inc. said Monday they are tying up in an all-stock transaction valued at $12 billion including debt to create operations dominated by a 400,000 net acre Permian Basin leasehold.

The two Oklahoma-based independents said the company, still branded as Devon, would create a “merger of equals” designed to drive $575 million of annual cash flow improvements by the end of 2021. Maintenance capital funding requirements in 2021 are expected to improve to $2.75/MMBtu Henry Hub natural gas and $33/bbl West Texas Intermediate.

Devon CEO Dave Hager would be executive chairman of the Oklahoma City-based operations while WPX chief Rick Muncrief has been tapped as president and CEO. The merger, depending on shareholder approval, could be completed in early 2021.

“This merger is a transformational event for Devon and WPX as we unite our complementary assets, operating capabilities and proven management teams to maximize our business in today’s environment, while positioning our combined company to create value for years to come,” said Hager. “Bringing together our asset bases will drive immediate synergies and enable the combined company to accelerate free cash flow growth and return of capital to shareholders.”

The substantial Permian Delaware sub-basin position of 400,000 net acres, 35% on federal lands, accounts for nearly 60% of the combined total oil output. The companies today are running a combined 17 rigs in the region.

The balance of the combined portfolio would extend across the Anadarko, Powder River and Williston basins, as well as the Eagle Ford Shale.

Devon, which built its unconventional expertise with entry in the granddaddy Barnett Shale, today controls more than 1.84 million net acres across the Lower 48. Today it is mostly trained on the Permian’s Wolfcamp formation in the Delaware. In the 2Q2020 conference call held in August, Hager said oil output climbed 6% from a year ago to average 153,000 b/d, exceeding midpoint guidance by 3,000 b/d.

In addition to the complementary assets, the two operators have “similar values,” Hager said, which reinforced the executive teams’ belief that it would be an ideal business combination.

“This merger-of-equals strengthens our confidence that we will achieve all of our five-year targets outlined in late 2019,” said Muncrief. “The combined company will be one of the largest unconventional energy producers in the U.S. and with our enhanced scale and strong financial position, we can now accomplish these objectives for shareholders more quickly and efficiently.”

Tulsa-based WPX has around 400 employees based in its headquarters, as well as a workforce spread across its operations.

Under the terms of the tie-up, WPX shareholders would trade each common stock owned for a fixed exchange ratio of 0.5165 shares of Devon.

The exchange ratio, together with closing prices for Devon and WPX as of Friday (Sept. 25), would result in a combined enterprise value of about $12 billion, including around $6 billion in WPX debt. Devon has an estimated market value of $3.38 billion, while WPX is valued at around $2.49 billion.

The transaction, expected to close in early 2021, has been unanimously approved by each board. Funds owning 27% of WPX that are managed by private equity EnCap Investments LP also have voted in favor of the merger.

The combination is designed to accelerate Devon’s transition to a business model that prioritizes free cash flow (FCF) generation over production growth. Management committed to limiting reinvestment rates to 70-80% of operating cash flow and restricting production growth to 5% or less a year. FCF would be deployed toward higher dividends, debt reduction and share repurchases.

The executive teams also touted their shared commitment to environmental, social and governance (ESG) initiatives. The combined company plans to pursue “measurable ESG targets, including methane intensity reduction, and will have progressive actions and practices in place to advance inclusion and diversity. Further, ESG metrics will be incorporated into the compensation structure and the board will monitor ESG goals and results.”

Following the merger, the board would consist of seven from Devon and five from WPX. The combined executive team would include Devon’s Jeff Ritenour, who would continue as CFO, and WPX’s Clay Gaspar continuing as COO. Devon’s David Harris would become chief corporate development officer, with WPX’s Dennis Cameron as general counsel, and WPX’s Tana Cashion as senior vice president of human resources.

Wood Mackenzie’s Alex Beeker, principal analyst of corporate upstream, said a merger/acquisition (M&A) move by Devon has been expected. “Tight oil consolidation has been underway for years, but extreme market volatility has slowed the process considerably. WTI has essentially hovered around $40/bbl since June, with the stability likely closing the bid-ask spread.

“We’ve expected Devon to make a move for some time. With $1.5 billion in cash on its balance sheet (albeit earmarked for debt reduction), Devon is on a relatively strong financial footing. But Devon has been shrinking fast since its disposal program started in earnest about two years ago. The company’s net production is down 40% since 2018.”

The tie-up also makes sense operationally, Beeker said. However, funding all the parts of the expanded portfolio “will prove tough,” he said. “We struggle to see Devon funding much more” of its joint venture in Oklahoma’s STACK, aka the Sooner Trend of the Anadarko Basin, mostly in Canadian and Kingfisher counties.

In addition, Devon’s Eagle Ford portfolio “is in managed decline. With some selective trimming, a new portfolio could actually mimic” EOG Resources Inc.’s, which has assets in the Bakken Shale, Eagle Ford, Delaware and Powder River.

The deal is the first upstream corporate merger for $1 billion-plus since Chevron Corp. in July agreed to pay $13 billion for Noble Energy Inc., according to Enverus.

“This deal represents the form of shale company consolidation that many across the industry have been looking for,” said Enverus senior M&A analyst Andrew Dittmar. “The selling point for investors is that the larger combined company will have the scale and efficiencies to navigate a challenging price environment and generate free cash flow for its investors…Shareholders have to believe in the long-term trajectory of the combined company since there is no immediate premium for potential sellers.”

The merger “seems sensible given the two companies’ similar corporate philosophies around managed growth, with a focus on free cash flow generation and rewarding shareholders along with complementary assets in the Delaware Basin,” Dittmar said. “In addition, neither one has any major red flags in the balance sheet that might deter a potential merger partner.”

Dittmar said more exploration and production (E&P) companies are likely to consolidate, which would be “both healthy for the industry and extremely likely over the longer term, but the timeline remains uncertain.

“The Devon/WPX merger fits the bill of how consolidation will be likely to play out and the types of well managed E&Ps that make attractive partners. How the market responds will likely play a role in the urgency with which other E&Ps pursue their own consolidation efforts.”

Still, the merger would be a blow for Tulsa, and the fate of an 11-story WPX headquarters now under construction was unclear.

“The realities of global energy markets necessitate moves like the one announced,” Tulsa Mayor G.T. Bynum said. “Earlier this year, WPX’s decision to remain and invest in Tulsa was based upon their recognition of the value their employees bring to the company’s overall success.

“WPX recognized that it was human capital that drove success and laid the foundation for growth. As a city, we remain committed to working with the new leadership team to ensure Tulsans continue to play a critical role in shaping the success of the merged company, and that those displaced” by the merger “are able to quickly transition and continue their contributions to the growth of Tulsa’s economy.”