The Oklahoma City-based natural gas-rich independent completed repositioning its portfolio last year, and has moved to build its oil stocks across North America. Canada heavy oil provided a big boost to output in 2014, but it was U.S. onshore basins and improved drilling techniques that quickly are padding the reserves numbers.

The focus into 2015 isn’t changing much from last year. With a solid balance sheet, the company still plans to work on more oil than gas this year. Exploration and production (E&P) spending has been cut from 2014, and there won’t be as many rigs in operation. However, flexibility is key, Richels told analysts.

“We expect to sustain operational momentum in 2015 with the significant improvements we have seen in our completion designs and a capital program focused on development drilling,” he said. “With strong results from our enhanced completions and a focus on core development areas, we expect growth in oil production to be between 20-25% in 2015, even with a projected reduction of approximately 20% in E&P capital spending compared to 2014.”

Capital spending this year is set at $4.1-4.4 billion. Because Devon is “well balanced between oil and natural gas, it is providing us with flexibility to shift capital in response to market conditions.”

This year, it’s less about appraisal and more about development, Richels said. He shared the microphone with COO Dave Hager and other executives. Hager is set to take the helm when Richels retires this summer.

With the focus more on development, testing is underway on ways to improve the output numbers at the same cost, or even less, to develop. Besides developing completion enhancements, which are reducing capital costs, management also is working with its service vendors. Already, service costs have dropped about 10% from 4Q2014. By the end of 2015, service costs could be as much as 25% lower than they are today, Hager said.

Devon isn’t waiting on vendors to help trim overhead, and new completion techniques already are making a big difference in efficiencies and reserves. E&P President Tony Vaughn told analysts that the company was “starting to see benefits of efficiencies, some stretching in all business units…Through capital allocation process, we also cored up in the sweet spots where we’ve got more development-type work and less appraisal-type work…” There’s a “science” to the appraisal areas, he said, which is evident in plays like the Permian Basin’s Delaware sub-basin. “All of it will pay off in dividends in the second half of the year, with 10% reduction in well costs, without question.”

Cost containment and lease operating expenses (LOE) are driving the business unit teams, Vaughn said. “The ability to reduce LOE is there…a large percentage is associated with labor, but I do think we still have the ability to shave off LOE and be a bit better than what we forecast…”

The forecasts are still a bit iffy because efficiencies keep getting better. Total output in 4Q2014 increased 20% year/year to 664,000 boe/d — 9,000 boe/d above guidance. Devon has sold a lot of its acreage in the past couple of years, but even so, retained assets in 4Q2014 averaged 239,000 b/d oil, about 1,000 b/d above guidance, which the highest average daily rate in company history. It’s still not working much on the natural gas portfolio and it won’t until prices are stronger.

A big boost to oil reserves in the latest quarter followed gains from heavy oil projects in Canada. However, the most significant growth was in the Permian Basin and Eagle Ford Shale. U.S. oil output jumped 82% year/year and was 65% higher from retained properties.

For Devon, completion has become an art form. In the Permian’s Delaware sub-basin, Devon since 2009 has improved output by more than 400%, or roughly 40% compounded annually. In the final three months of 2014, oil production didn’t improve dramatically on the numbers side; it rose to 55,000 b/d from 50,000 b/d in the year-ago period. Natural gas production increased to 137 MMcf/d from 116 MMcf/d. Eighteen rigs were in operation at the end of December.

What set the Delaware apart, however, was highlighted by 13 Bone Spring formation wells drilled in 4Q2014 using enhanced completion designs. Devon opted for 16 fracture stages versus 13, and it used 1,600 pounds/foot of sand versus 600. The improvements led to 30-day initial production (IP) rates averaging 940 boe/d, more than 60% from the old completion design.

What those new techniques mean is everything in a low-price commodity market.

New designs also are improving results in the Eagle Ford, where net output in 4Q2014 averaged 98,000 boe/d. Gas production totaled 126 MMcf/d, compared to zero in the year-ago period. Sixty-two wells were ramped up in the Texas play, with IP rates averaging 2,100 boe/d, also exceeding the type curve by more than half. Devon expects the Eagle Ford to be the “highest and most profitable production growth of any asset” this year. An 11-12 rig program this year, with nearly all of the activity in DeWitt County.

“This impressive year/year production growth rate was delivered with capital investment of only $250 million in 2014,” management noted. “An enhanced completion design and inexpensive remediation work on existing wells drove this capital efficient growth.”

On average, eight rigs are set to run in Anadarko this year, nearly all in Cana-Woodford and the South-Central Oklahoma Oil Province, or SCOOP. Tests are underway using up to 2,500 pounds/lateral foot of sand, two times the current design, in the wells.

Preliminary data from completion pilots indicate the potential for even more improvement to well economics: Devon brought on nine Cana-Woodford wells between October and December, with IP rates averaging 1,460 boe/d, half liquids, half gas. The type well rates were more than 20% above IP type curves. This year, the plan is to spend about $400 million to develop 95 wells, including 20 in the SCOOP,

While many of its peers have knocked much more from capital expenditures in 2015, Devon has “minimal exposure to long-term service contracts and limited lease expirations,” management noted. “This flexibility allows Devon to dynamically allocate capital in response to industry conditions as the year progresses.”

On a boe basis, Devon is forecasting 5% growth in 2015 from 2014. Expected growth in oil production remains unchanged at 20-25%. Liquids output is forecast to drop by 2%, while gas production is seen falling off by around 5% from 2014.

At the end of December Devon was operating 43 rigs running in the U.S. onshore, with 18 in the Permian, 11 in Canada heavy oil, five in the Anadarko Basin, three in Eagle Ford, two in the Mississippian-Woodford trend, and four in the Rockies.

The company’s midstream business, driven by equity interest in EnLink, saw its quarterly profits rise 66% to an all-time high of $852 million. Ownership has increased by almost 60% to $7.6 billion. A drop-down “potential” exists this year for Devon’s Victoria Express Pipeline in the Eagle Ford and Access Pipeline in Canada, which both completed first full-quarter operations in 4Q2014. A Victoria Express transaction is expected this year, with Access Pipeline’s potential drop-down under evaluation.

Devon reported a net loss of $408 million (minus $1.01/share) in 4Q2014, versus year-ago profits of $207 million (51 cents). The quarterly loss resulted because of a $1.9 billion goodwill impairment related to conventional gas assets in Canada that it no longer owns. Excluding the one-time impact, writedowns and other items, earnings were 83 cents/share). Revenues jumped to $6 billion from $2.62 billion. Operational cash flow rose 10% to $6 billion. Upstream revenues fell 3% to $2.1 billion. Cash settlements related to hedges improved revenue by $4.23/boe in 4Q2014, partially offsetting lower realized oil/liquids prices. 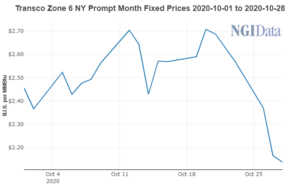