Devon Energy Corp. grew production in the Permian Basin in 2021 and expects to further ramp up in the prolific oil and natural gas region amid lofty crude prices this year. However, executives said they will hold the line on overall output in 2022, as uncertainty about long-term global energy needs outshine current surges in crude demand. 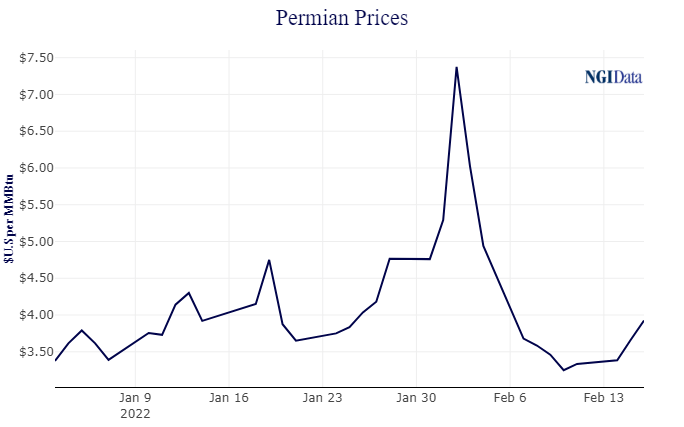 In previous cycles, shale producers such as Devon would have accelerated output by this stage to cash in on the lofty prices. However, the Oklahoma City-based independent and its large publicly traded peers are under pressure from investors to increase oil output only gradually – to preserve capital for renewable energy projects and for shareholders dividends and repurchases.

Devon is also maintaining a steady but flattish production posture established over the last couple years because management is concerned that global producers could flood the market with crude and quickly create an abundance of supply.

“We believe staying with overall maintenance capital…is the right approach for our shareholders and for our organization,” COO Clay Gaspar said during a call to discuss fourth quarter earnings this week.

Delaware production averaged 416,000 boe/d, a 34% increase from the first quarter of 2021, when Devon closed its all-stock acquisition of Lower 48 rival WPX Energy Inc.

The merger added more than 200,000 boe/d (60% oil) to Devon’s 325,000 boe/d (47% oil). While the substantial Permian Delaware sub-basin position of more than 400,000 net acres accounts for 60%-plus of the combined companies’ total oil output, Devon has since emphasized the Delaware acreage even more.

The company said its fourth quarter capital program averaged 16 operated drilling rigs and four completion crews, with more than 80% of activity in the Delaware formation. Upstream capital spend was $486 million, while midstream, land and other capital requirements totaled $35 million in the quarter, Devon said.

In 2022, Devon expects to operate an average of 14 rigs – out of 19 total — and bring online approximately 220 new wells in the Delaware sub-basin. About 60% of Delaware activity will be directed toward development opportunities in New Mexico, with the remaining investment allocated to the company’s acreage in Texas.

Its discipline is set against an uncertain global oil backdrop. For example, Iran has the capacity to add 1.3 million b/d of crude to global supplies, according to Rystad Energy analysts. It may get the green light to do so this year if ongoing negotiations with U.S. and European officials about lifting sanctions against Iran prove fruitful. The sanctions are tied to strict limits on Iran’s nuclear weapons ambitions.

OPEC members also are currently increasing supplies slowly. While leaders Saudi Arabia and United Arab Emirates have been cautious to date, citing pandemic uncertainty and political strife in Europe, both have capacity to boost output substantially this year, the Rystad team said.

U.S. producers, meanwhile, have held output around 11.6 million b/d early this year. That is down from the 11.8 million b/d level late in 2021 and far below pre-pandemic highs, according to federal data.

At the same time as oil prices soar, so too does overall inflation, creating expense headwinds that Devon is keen to offset with both merger-and-acquisition-driven efficiencies, as well as old-fashioned expense control.

The U.S. Bureau of Labor Statistics (BLS) said last week the consumer price index (CPI) jumped 7.5% in January from the same month a year earlier. The print marked the fastest rate of increase since February 1982 and the eighth consecutive month of inflation above 5%.

“Inflationary pressure and supply chain disruptions are a reality,” Gaspar said. “Based on today’s industry activity and commodity price projections, we’ve baked in around 15% higher costs” this year compared to 2021.

However, expense reductions tied to the WPX acquisition improved the corporate cost structure by 31% in 2021, on a pro forma basis. This enabled Devon to generate more free cash flow even as it wrestled with inflationary pressures. It expects continued progress on the cash flow front this year.

The WPX transaction “was perfectly timed,” CEO Rick Muncrief said. “It’s a very bottom of the cycle [deal] and set the groundwork for Devon’s significant value creation during the year…With this advantaged platform we executed on our Delaware focused operating plan and captured cost synergies that resulted in $600 million of annual cash flow improvements.”

In the fourth quarter, Devon’s free cash flow was $1.1 billion, and it posted a record $2.9 billion of free cash flow for the full year. That marked a three-fold increase, reflecting both the acquisition and overall spending discipline. Devon announced a 45% increase to its fixed quarterly dividend and expanded its share repurchase authorization.

“We will be relentlessly focused on delivering high returns on capital employed, margin expansion, accelerating free cash flow growth and returning excess cash to shareholders,” Muncrief said.Devon reported fourth quarter earnings of $1.51 billion ($2.23/per share) on revenue of $4.27 billion. In the year-earlier period, the company reported a loss of $102 million (minus 27 cents) on revenue of $1.28 billion.