Devon Energy Corp. of Oklahoma City, OK, announced Tuesday that it will acquire Mitchell Energy & Development Corp. for $3.1 billion in cash and stock, making it the second largest independent natural gas producer in the United States after Anadarko Petroleum Corp.

Based on Devon’s closing stock price of $50.26 on Monday, the total value of the transaction would be about $3.1 billion. Devon also has agreed to assume approximately $400 million of debt and other obligations of Mitchell, which is based in The Woodlands, TX. Because of Mitchell’s low debt load, Devon “will come out of [the] transaction with a balance sheet unimpaired,” said Devon Chairman J. Larry Nichols.

Mitchell Chairman and CEO George P. Mitchell and his wife own approximately 46% of the company’s outstanding common stock, and have agreed to vote their shares in favor of the acquisition by Devon. After the completion of the transaction Mitchell and his wife will own about 9% of Devon’s common shares. Todd Mitchell, son of George Mitchell, will join Devon’s board of directors.

Given Mitchell’s pledge of his stock, “I think we can say that it [the deal] has a very high probability of being closed,” said Nichols during a briefing with analysts and investors Tuesday. He anticipates that the merger will be completed within 60 to 90 days, but conceded that it could take longer if the Federal Trade Commission decides to review it. The two producers, he noted, have been in merger talks since June.

“The Mitchell properties fit perfectly with our long-term objectives,” Nichols noted. “The reserves are concentrated — nearly all [are] in Texas, 71% [are] natural gas with an impressive growth curve. In addition to the oil and gas properties, we will also acquire one of the largest suites of U.S. midstream assets of any independent. We believe this transaction can deliver significant growth in per-share value.”

Mitchell’s two most significant assets are its Barnett shale play in North Texas and its extensive midstream network in the Lone Star State. This “huge, massive shale formation” that covers 10 counties is estimated to contain recoverable reserves of up to 10 Tcf, but current technology only allows for about 8% of the gas to be extracted, Nichols said. But he noted that Mitchell Energy is at the forefront of new technology to free up more of the reserves.

Mitchell has the largest midstream operations of any independent producer, encompassing 8,800 miles of gas gathering pipelines and six processing plants. The lines are concentrated near Mitchell’s core operating areas in Texas, which enables it to gather approximately 80% of its own gas and third-party gas. The location of the gathering lines near Mitchell’s production is a major plus, said Nichols. “The worst place to have a gas field is where someone else controls the pipeline.”

The facilities are tied into pipelines serving the key Dallas/Ft. Worth area, which will pave the way for the combined company to become a “major supplier” to that market, Nichols noted. The processing plants, gathering pipelines and other midstream assets that Devon will acquire are valued between $800 million and $1 billion.

George Mitchell said the proposed merger will provide “significant value [to Mitchell] while retaining a unique opportunity to participate in the exciting upside potential of Devon.” Mitchell shareholders and employees “will benefit from becoming part of a larger, stronger and more diversified company.”

As a result of the acquisition, Devon will acquire approximately 2.5 Tcf of gas equivalent, increasing the company’s proved reserves to more than 1.5 billion barrels of oil equivalent. Its proved reserves, 82% of which will be in North America, will be 58% natural gas, 32% oil and 10% natural gas liquids.

As for the future, Nichols said Devon plans to continue its focus on coalbed methane (CBM) production in several U.S. basins — Raton, San Juan, Powder River and Cherokee/Arkoma. Devon expects to triple its CBM production by 2006, he noted. In addition, the company plans to have production onstream by mid-2002 in the Northern Foothills of Canada, where it is involved in a joint venture with BP.

Nichols estimated that the capital spending budget for the U.S. and overseas’ exploration and production activities of the merged company will be in the “ballpark” of $1.7 billion to $2 billion in 2002. He believes future gas prices — on which he remains “fairly bullish” — will justify this level of spending.

Devon and Mitchell combined produced about 1.4 Bcf/d of natural gas in the U.S. during the second quarter of this year, which would position the merged company as the second largest independent gas producer behind Anadarko, but ahead of Burlington Resources and Unocal. Devon currently ranks among the top five U.S.-based independent oil and gas producers.

Devon said it expects to achieve annual operating and overhead synergies following the merger of at least $20 million.

The transaction is subject to approval by the shareholders of both companies as well as the expiration of the Hart-Scott-Rodino waiting period, and other traditional closing conditions. Both Devon and Mitchell said they plan to call special shareholders’ meetings as soon as practicable following the completion of the regulatory review.

Â©Copyright 2001 Intelligence Press Inc. All rights reserved. The preceding news report may not be republished or redistributed, in whole or in part, in any form, without prior written consent of Intelligence Press, Inc. 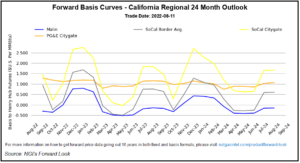 After plunging close to $8.50/MMBtu just before the open, natural gas futures clawed most of the way back throughout Friday’s session despite little day/day change in fundamentals. The September Nymex gas futures contract settled at $8.768/MMBtu, down 10.6 cents from Thursday’s close. October fell a steeper 11.9 cents to $8.744. At A Glance: Cooler trends…