Lower 48 stalwart Devon Energy Corp. is working with fewer rigs and completion crews across its four core holdings in the Lower 48, but stronger oil production still is in sight for the year, along with a special dividend payment from former natural gas juggernaut, the Barnett Shale. 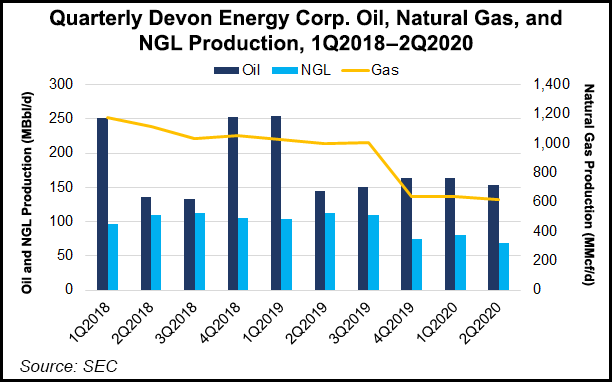 CEO Dave Hager led a conference call Wednesday with his management team to share quarterly results and highlight the outlook to the end of the year. While many energy operators have reduced or eliminated dividends in light of the sharp decline in profits, Devon’s board is giving back, approving a special dividend predicated on the accelerated sale of the Barnett portfolio.

Beyond the numbers, though, the CEO praised how the workforce has come together with the pandemic raging.

“As we navigate through the challenges presented by the Covid-19 crisis, our top priority continues to be the safety and well-being of our employees and the communities in which we operate,” Hager said. He commended the workforce “for rapidly adjusting to difficult industry conditions.”

Hager also offered some encouraging news for shareholders during a time when the positives have been few and far between.

Ironically, Devon’s former No. 1 prospect, the Barnett, is again proving its value, Hager explained to analysts. The legacy formation, the first in North America to demonstrate what the combination of horizontal drilling and hydraulic fracturing could do for U.S. gas production, helped the Oklahoma City independent become an onshore production whiz by the mid-2000s. As prices stagnated and the unconventional techniques proved as successful in higher-priced oil formations, the North Texas formation lost its shine.

In April, the Barnett leasehold, which Devon long ago put up for sale, was dealt to Thailand’s Banpu Kalnin Ventures (BKV) for $570 million cash and contingent payments of up to $260 million.

The sale, originally set for completion for year’s end, has been accelerated to Oct. 1, giving management leeway to improve shareholder fortunes, Hager said.

With the faster-than-expected divestment, the board declared a special dividend of 26 cents/share. Based on the current number of outstanding shares, the dividend should result in an aggregate payment of $100 million, in addition to the regular quarterly cash dividend of 11 cents/share.

After accounting for purchase-price adjustments, including an upfront deposit of $170 million and allocated revenues/expenses, the net cash payment from BKV at closing is expected to be more than $300 million.

The accelerated sale “provides Devon the opportunity for contingent cash payments of up to $260 million based upon future commodity prices, with upside participation beginning at either a $2.75/MMBtu Henry Hub natural gas price or a $50/bbl West Texas Intermediate oil price,” Hager said. The contingent payments from BKV begin Jan. 1 and extend over four years.

A key contributing factor is Devon’s intent to repurchase up to $1.5 billion of debt, resulting in go-forward interest savings of $75 million/year on a run-rate basis.

“As we navigate through the challenges presented by Covid-19, Devon continues to transform how it operates.” CFO Jeff Ritenour said. “The next phase of our strategic plan is to take meaningful and decisive steps to sustainably improve our cost structure and reduce debt. The aggressive reduction of cash costs across our organization is expected to drive down per-unit expenses by an incremental 10% versus our second quarter 2020 results.”

Solid gains from the Permian Basin’s Delaware sub-basin in southeastern New Mexico also have led to a higher oil production forecast for 2020 to 148,000-152,000 b/d.

Devon, which works more than 1.84 million net acres across the Lower 48, mostly is trained on the Permian’s Wolfcamp formation. It also holds substantial leaseholds in the Anadarko Basin of Oklahoma and the Powder River Basin (PRB), as well as the Eagle Ford Shale.

Because of low prices, Devon had joined many of its peers and temporarily curtailed 10,000 b/d during the quarter. However, as prices have stabilized and begun to recover, there are no plans to shut-in volumes through the remainder of the year.

Devon exited June running nine operated drilling rigs and one completion crew, a sharp retreat from the start of April, when 15 rigs and six crews were working across its Lower 48 stronghold.

In the Wolfcamp formation of southeastern New Mexico, 22 operated wells came online in 2Q2020. Completed well costs improved to a new record of $700/foot, while production expenses declined 20% to $7.58/boe.

PRB production averaged 24,000 boe/d. Gas volumes were flat at 2 MMcf/d, with oil at 18,000 b/d from 15,000; NGL output was flat at 2,000 b/d.  All the rigs working the PRB were dropped in the quarter and only four wells were brought online. Average completed well costs, mostly for work in the Parkman and Turner formations, were $5.9 million.

For the remainder of the year, PRB capital is to be directed toward appraisal work in the Niobrara. A key upcoming project is the Steinle pad, a three-well spacing test targeting the Niobrara B interval, which is scheduled to ramp up by the end of September.

Devon brought online 13 development wells in South Texas, with average 30-day rates of 2,300 boe/d and completed well costs of $6.6 million. However, no operated rigs or completion crews are now working. Twenty-two drilled but uncompleted wells are in inventory to finish. Depending on pricing, capital activity is set to resume by the end of the year.

The operational focus in the Anadarko today is focused on “optimizing base production and reducing controllable downtime across the field.” Devon has no drilling rigs or completion crews working in Oklahoma today.

Overall operating costs were down 14% year/year to $13.92/boe, with general/administrative expenses falling by 31%. Capex totaled $203 million in 2Q2020, or 10% below midpoint guidance, which management attributed to efficiencies in the Delaware and improvements in oilfield services costs.

Based in part on the efficiencies in the Delaware, Devon has lowered full-year capex guidance to $950 million to $1 billion, a $25 million reduction from previous midpoint expectations. In 3Q2020, upstream capex is expected to be $175-225 million.

Devon exited June with $1.7 billion of cash and an undrawn credit facility of $3 billion. At the end of the quarter, the outstanding debt balance was $4.3 billion with no maturities until late 2025.