Lower 48 independent Devon Energy Corp., whose broad portfolio stretches across Texas, and into the Anadarko and Powder River (PRB) basins, has curtailed 10,000 b/d of oil through at least June, with future shut-ins to be made on a month-to-month basis given ongoing price volatility. 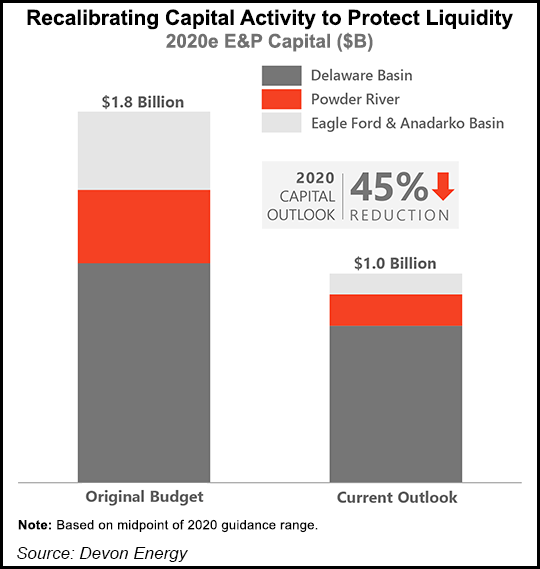 CEO Dave Hager helmed a conference call on Wednesday to discuss first quarter performance and detail how the producer plans to cope with the sharp downturn in prices and demand. The focus for now is on the Permian Basin within the Delaware sub-basin, with deferred business in the Anadarko, Eagle Ford Shale and PRB until conditions warrant.

“We have elected to continue to invest and preserve operational continuity in the Delaware Basin to generate the necessary cash flow to effectively operate our business,” Hager said.

However, “we’re suspending all capital activity in the Anadarko, Eagle Ford and Powder River plays until market conditions improve. We believe this is a prudent program for the current environment given the uncertainty regarding the depth and duration of this pricing downturn.”

Devon has “minimal long-term contract commitments. Our opportunities set consists of only short-cycle projects, and we have no significant lease expiration issues.”

The bottom line is capturing value, which is not possible for now. Management wants to be “mindful not to accelerate valuable production into these weak markets,” Hager said. “To combat these conditions, our first course of action is to reduce our current completion activity levels by approximately 65% from the first quarter.”

The decision to limit turn-in-lines should lead to a drilled but uncompleted, or DUC, backlog of around 100 wells at the end of the year. Wells brought online recently also have been restricted “to ensure that we do not deliver flush production into these tough markets.”

The decision to defer output from existing wells is being made because the variable cost to operate exceeds expected revenue, Hager added.

“We plan to approach these curtailment decisions on a month-to-month basis, but for the second quarter, we expect to defer roughly 10,000 b/d of oil across our portfolio. Of this amount, only 20% is driven by the shut-in of production. The vast majority of curtailments are related to the restricted flowback of higher rate wells and the deferral of bringing a few new wells online in the second quarter.”

Devon has “no pricing exposure” to West Texas Light, an oil found in the Permian Delaware. Nor does it have exposure to Clearbrook Bakken Sweet, North Slope, Canadian bitumen “or many other well-known pricing hubs that have recently experienced exceptionally weak prices.”

When energy industry conditions normalize, “it is our strong belief that the industry’s historic approach of creating value by prioritizing production of net asset value growth will not be acceptable to investors,” Hager said.

“It is not a viable strategy to reinvest all cash flow and have high leverage,” or count on the Saudi-led Organization of the Petroleum Exporting Countries cartel to voluntarily reduce output in the future.

“To win in the next phase of the energy cycle, we are convinced that a more balanced operating model that prioritizes additional upfront cash returns for shareholders is required…This critical shift in philosophy will result in a much greater margin of safety, which we all believe is needed.”

This year, oil production is forecast to be flat from 2019. However, Hager stressed that the company expects to emerge from the downturn in a position of strength.

Devon, one of the oilier operators in the U.S. onshore, in March clipped its capital expenditures (capex) twice, with spend now set at $1 billion for 2020. Executive pay has been reduced by 40%, and management is prepared to take more action if necessary, Hager said.

“Our swift response to recalibrate drilling and completion activity and lower operating costs ensures that we can fund all our 2020 capital requirements within cash flow. We are confident that we will emerge from this downturn a strong company, and we are well positioned to take full advantage of our high-quality portfolio when commodity prices normalize.”

Capex in the first quarter fell by about 12% below the midpoint of guidance to $391 million. Operating cash flow increased 21% year/year to $529 million, with free cash flow generation of $104 million. Upstream revenue totaled $908 million in 1Q2020, down 5% year/year, with production expenses averaging $10.02/boe. Including costs reclassified to discontinued operations, production costs declined 6%. Corporate costs also declined, with general and administrative expenses down 33% from 1Q2019 because of personnel layoffs.

Devon exited March with $1.7 billion in cash and an undrawn credit facility of $3 billion. The outstanding debt balance was $4.3 billion with no maturities until late 2025. Further enhancing liquidity was an amended Barnett Shale purchase and sale agreement completed in April.

Financial strength also was enhanced by the hedge position, with 90% of expected oil production protected through 2020 at an average protected floor price of $42/bbl.

The company invested $38 million to repurchase 2.2 million shares of common stock in the first quarter, but going forward the share repurchases have been suspended to preserve liquidity.