Devon Energy Corp., which has continued to build a more oil-targeted Lower 48 arsenal, said Wednesday it plans to take capital reserved for Oklahoma and move it to the Permian Delaware and Powder River basins. 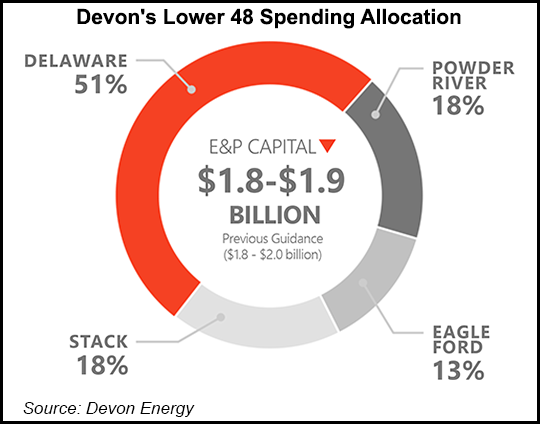 CEO Dave Hager during a quarterly conference call Wednesday said the Oklahoma City independent was “nearing the completion of this transformation to a U.S. oil-growth company, allowing us to focus entirely on our world-class oil assets” in the Permian Delaware, Powder River Basin (PRB), Eagle Ford Shale and Oklahoma’s STACK, aka the Sooner Trend of the Anadarko Basin, mostly in Canadian and Kingfisher counties.

“First, oil growth continues to exceed our plan, and we are now raising our full-year production outlook for the second time this year to a 19% growth rate,” Hager said. “This represents a 400 basis point improvement compared to our original budget expectations heading into the year.

“Importantly, the strong well productivity driving oil growth higher is complemented with a step change in capital, resulting in a $50 million reduction in our 2019 capital outlook.”
Devon’s 2019 capital budget already was down $200 million from 2018; spending now is expected to total around $1.8-1.9 billion this year. To further optimize returns, Devon has reallocated $50 million of planned capital to the better performing Delaware and PRB that initially was budgeted for the STACK.

“So far this year, we have brought online 20% more wells for 10% less capital compared to 2018,” the CEO noted. “Anyway you slice it, these are outstanding results.” Devon also is on track to achieve more than 70% of its targeted $780 million annual savings by year’s end.

The strong results came despite volatile oil and natural gas prices. Realized oil prices were 97% of the West Texas Intermediate benchmark, in part on “advantaged marketing agreements” in the Delaware, where oil realizations improved by 12% sequentially.

“Given the commodity price variability we must navigate through in this space, I firmly believe the investment appeal of the ”new’ Devon is further distinguished by our strategic approach to the business,” Hager told analysts.

“We all know there have been some messy and surprising results in the industry of late, but I want to be clear about our unyielding commitment to excellence, discipline and consistency of results.” The revamped financial driven model is designed to generate sustainable cash flow growth and return cash to shareholders. “This model is working,” he said.

COO Tony Vaughn said the strongest performance in the quarter was achieved in the Delaware in southeastern New Mexico, where output increased by 58% to 120,000 boe/d. A key growth driver was credited to 28 wells brought online in the Stateline area, with average initial production (IP) rates of 2,100 boe/d per well over 30 days.

“Overall, as our results indicate, we are well up on the learning curve and are very confident in our Delaware asset, specifically in the Wolfcamp formation, which will be our most active target going forward,” he said. “We have a very good understanding of lateral and vertical connectivity.

“We have settled on development spacing of about four-to-eight wells per landing zone, depending on the oil column pressure connectivity and the subsurface variability.”

In the Delaware, called the company’s “capital efficient growth engine,” activity was diversified across five core areas. Twenty-eight wells were drilled in the second quarter with average initial production (IP) rates of 2,100 boe/d. Laterals in the play averaged 7,500 feet. Because of efficiencies, Devon drilled five more wells than originally planned.

The Wolfcamp formation alone saw year/year drilling times improve by 20%. In addition, facility redesign in the formation reduced capital by up to 50% per well.

Devon also is investing in water infrastructure in the Delaware, where it now operates 40 disposal wells and eight water reuse facilities. More than 90% of the produced water is on pipe, with 80% of what’s used recycled. The water infrastructure has reduced costs by more than $2 per barrel versus trucking expenses, management noted.

In the PRB, net production climbed by 29% year/year. Six wells were brought online with average IPs of 1,500 boe/d. The Turner formation’s year-to-date drilling times improved by 40% from the same period of 2018. Devon is forecasting oil growth this year will be 50% higher than in 2018.

Upstream revenue totaled $1.2 billion in the quarter, with oil sales accounting for 72%.

In early August, Devon’s remaining commodity hedges had a positive fair-market valuation of about $185 million, representing about 75% of forecast oil and gas production in the second half of 2019.

A key contributor to the improving cost performance was lease operating expense (LOE), the company’s largest field-level cost. On a per-unit basis, LOE declined 11% year/year. Coupled with the recent sale of its Canadian business, LOE now is expected to decline by around 15% from original 2019 expectations.

Devon still plans to sell its Barnett Shale gas assets in North Texas; data rooms are open with initial bids expected by the end of September.