Devon Energy Corp. has reached an agreement to sell most of its Canadian conventional portfolio, with proved reserves of about 170 million boe, to Canadian Natural Resources Ltd. for US$2.8 billion. Excluded are unconventional projects in the gassy Horn River Shale, Lloydminster and thermal heavy oil assets. 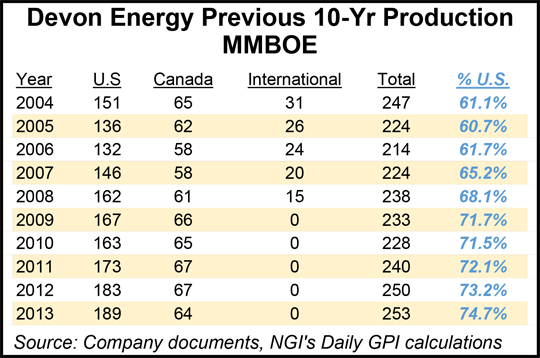 The latest agreement with Canadian Natural “represents a significant step forward in the execution of our noncore divestiture process,” said CEO John Richels. “This tax-efficient transaction provides for a clean exit from our Canadian conventional business” for a value of nearly seven times 2013 operating earnings. “Furthermore, the timely execution of the largest piece of our noncore divestiture process accelerates the refocus on core assets.”

More properties remain to be sold in the United States, with plans to complete the divestiture process by year’s end.

Devon has made a conscious effort over the last few years to concentrate more on the United States, which is reflected by the domestic operations growing from 61% of total company production in 2004 to nearly 75% in 2013.

Even with this renewed focus, Devon’s Canadian operations have been fairly steady in recent years, with annual production ranging between 61 million boe to 68 million boe since 2008.

“The divestiture of its conventional Canadian properties should continue to increase Devon’s U.S. production as a percentage of its company total even higher going forward, everything else being equal,” said Patrick Rau, NGI’s director of Strategy & Research.

This past year has been an active one for the Oklahoma City operator. In October it provided an estimated $4.8 billion of its U.S. midstream assets in Texas and Oklahoma, as well as 800,000 net acres, to form a partnership with Crosstex Energy Inc.’s assets in the Marcellus, Utica, Barnett, Eagle Ford and Haynesville shales, Permian Basin and the Gulf Coast (see Shale Daily, Oct. 21, 2013).

Operating cash flow jumped 26% to $1.4 billion in the final period. Including $419 million in cash received from asset sales, cash inflows totaled $5.9 billion in 2013.

“2013 was a year of strong execution and exciting change for Devon,” said Richels. “Our drilling programs not only drove impressive oil production growth, but also expanded margins and improved operating cash flow.

“Additionally, we high-graded our portfolio through an accretive Eagle Ford Shale acquisition, an innovative midstream combination, and initiated an asset divestiture program. These actions provide a platform for Devon to achieve attractive high-margin growth in 2014 and for many years to come.”

Upstream revenues increased in 2013 from 2012 by 19% to $8.5 billion on higher oil production and improved natural gas realizations. In 2013, oil sales accounted for more than half of Devon’s total upstream revenues. The marketing and midstream operating profit of $513 million represented a 25% increase year/year, “attributable to higher natural gas prices and strong cost management.”