Oklahoma City-based Devon Energy Corp. reported steady growth in the first quarter, especially from its Permian Basin assets. However, the company is holding firm to its “value over volume” approach, choosing to maintain its production and capital investment levels. 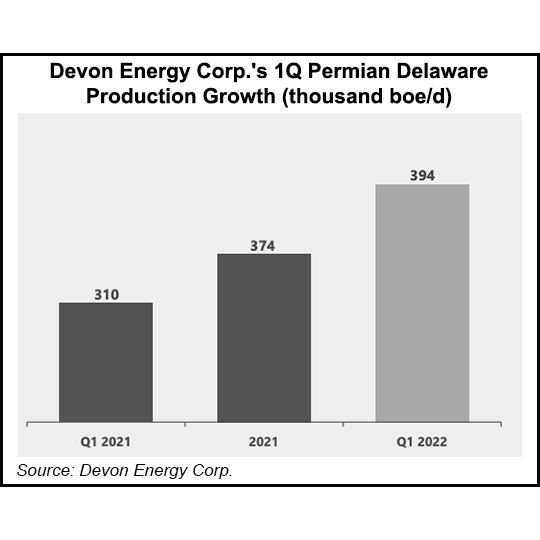 Despite heightened global oil and gas prices because of the Russian invasion of Ukraine and calls for more domestic production, the independent plans to sustain production levels between 570,000 to 600,000 boe/d throughout the year. Upstream capital investment is set at $1.9-2.2 billion.

CEO Rick Muncrief said the company would be thoughtful about its role as an energy producer and how the invasion of Ukraine by Russia is impacting oil and natural gas prices. However, he said, volatility also meant Devon had to be wary of “the ongoing supply chain challenges and the economic uncertainty resulting from the crisis in Ukraine.”

Over the first three months of 2022, Devon management focused on the margins and expanding value in its production to combat substantial cost increases in raw materials, labor shortages and wait lists for products and services, according to the company. Devon has also been looking at possible liquefied natural gas (LNG) projects to help capture a better realized price for its natural gas in the longer term.

CFO Jeff Ritenour said “we do think there’s going to be opportunities” for LNG, but Devon is still “actively evaluating” what kind of investments or partnerships would “make the most sense.”

The Permian Delaware sub-basin was the “growth engine” once again during the first quarter. Delaware production totaled 394 million boe/d, up  27% from 1Q2021. Devon ran 14 rigs in the sub-basin and brought 52 wells online across the Avalon, Bone Spring and Wolfcamp zones.

Its gains over 1Q2021 in the Permian were lifted by the all-stock merger with WPX Energy Inc..

Ritenour said the first quarter production may be the lowest for this year. Winter weather impacts reduced volumes by an estimated 15,000 boe/d.

“With these curtailments back online and more than 80 developing wells scheduled to initiate first production, we expect volumes to increase by around 3% to nearly 600,000 boe/d in the upcoming quarter,” Ritenour said.

Devon also has substantial leaseholds in the Eagle Ford Shale, and the Anadarko, Powder River and Williston basins.

Eagle Ford production averaged 36,000 boe/d in 1Q2022, up 19% year/year. Devon commenced first production on eight wells in the Eagle Ford during the first quarter, and plans to have 40 wells online by the end of the year.

In the Anadarko, production averaged 75,000 boe/d from 68,000 boe/d in the year-ago quarter. Thirteen wells were spud during the first quarter.

When asked if the company would move to increase its investments in the Anadarko to take advantage of the heightened natural gas strip, COO Clay Gaspar said funds would “continue going to work there in a very material way.” However, the continued results from the Delaware would still likely drive 70% of Devon’s allocations into the Permian.

“Remember, we have some deeper, gassier options inside the Delaware that we barely have scratched the surface on,” Gaspar said. “So, there’s a lot of significant upside around the portfolio, but I don’t see a wholesale change from us being a predominantly Delaware Basin-focused organization.”

The same discipline to its long-term plans also applies to Devon’s acquisitions and growth, Gaspar said. The company is viewing its acquisitions through a 10-year lens and could consider bolt-on acquisitions, as it has done in the past. However, Devon is pointed toward a “moving target” instead of jumping at today’s heightened prices.

“Certainly, commodity prices help, but we’re not just relying on a higher commodity price to add to the quantity and the quality of this portfolio,” Gaspar said.

The board also has approved a fixed-plus-variable dividend of 1.27 cents/share, a 270% increase year/year.