Devon Energy Corp. is selling its assets in the Utica Shale in eastern Ohio, part of a strategy to raise new venture capital so it can focus on opportunities in the Permian Basin, Mississippian Lime and the Niobrara formation. 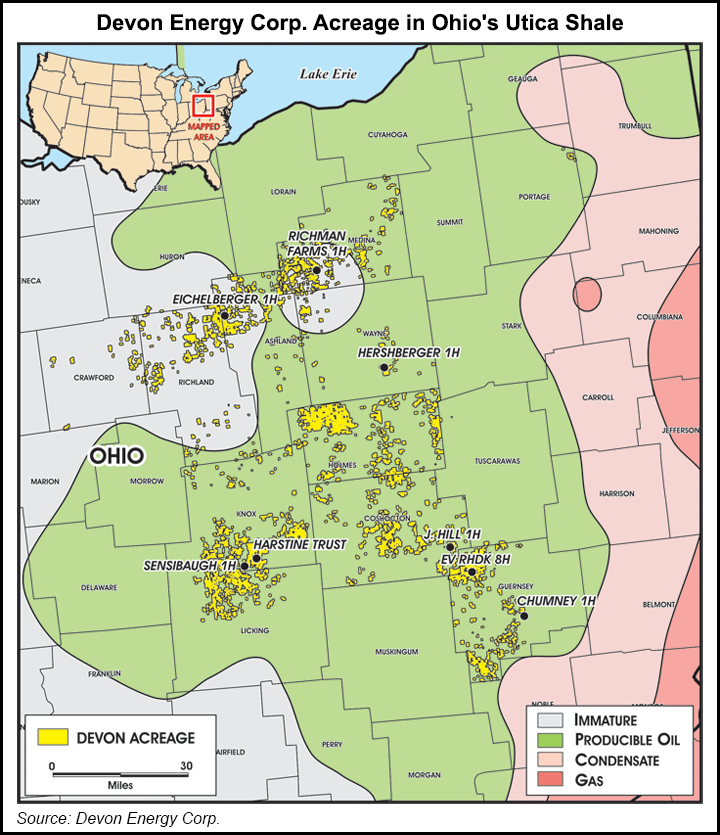 “You have to recognize that energy companies such as Devon can’t operate in every play,” Minty said Thursday. “We have to choose the plays that have the potential and the size necessary to compete for the capital within our company. Other companies have had success in the TMS and the Utica, and we think our acreage in these plays might be a better fit for them than they might be for Devon.”

Devon’s holdings in all five unconventional regions are part of a $2.2 billion joint venture (JV) with China Petrochemical Corp., also known as Sinopec (see Shale Daily, Jan. 4, 2012). “We’ve said from the beginning that we didn’t expect to be working in all of those plays over a long period of time,” Minty said. “We said we would work and explore all five of them, and then we fully expected to narrow our focus on some of them.”

Scotia Waterous (USA) Inc., the oil and natural gas unit of Scotiabank, has been hired by Devon as exclusive adviser to assist in the sale of the company’s assets in the Utica. The firm hopes to begin accepting bids on March 13.

“The Utica/Point Pleasant play is currently in the early stages of appraisal and development,” Scotia Waterous said. “Regional well results are promising, and there is growing confidence in the prospectivity of the play given very significant leasing and drilling activity. This offering provides an opportunity to acquire a material leasehold position…with significant upside development potential in the Guernsey County area.”

According to the firm, Devon’s offering includes an average 79.7% working interest on about 244,000 gross (195,000 net) acres in the liquids-prone portion of the play, and average royalty plus minor additional burdens of 13.2%. The offering also includes about 270 horizontal well permits issued by the Ohio Department of Natural Resources.

During Devon’s 2Q2012 earnings call, David Hager, the company’s executive vice president for exploration and production, said results from the company’s first two horizontal wells in the Utica: Eichelberger 1H in Ashland County and the Richman Farms 1H in Medina County — were “not encouraging,” (see Shale Daily, Aug. 16, 2012). At the time, Hager said Devon would focus on the liquids-rich area of the play.

Devon has also retained Scotia Waterous for its sale of assets in the TMS. Devon’s TMS offering includes about 297,000 net acres, nearly 95% undeveloped, and tied to the JV with Sinopec, plus production of about 600 b/d. Eight wells have been drilled on the acreage being offered by Devon; six are producing and one is awaiting completion.