With the outlook for oil and natural gas demand dimming because of the restrictions imposed by Covid-19, global capital spending may fall by 17% year/year with the Lower 48 producers taking the brunt. 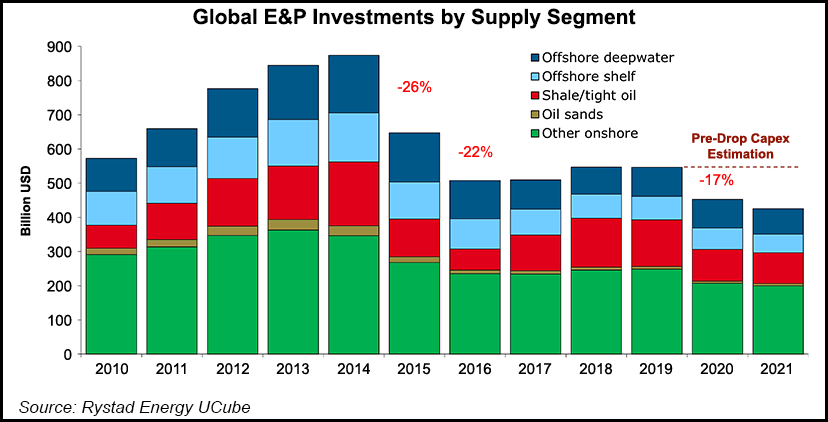 The market is reflecting an “inevitable surge in inventories and the likely stock overhang in 2021. It is very ugly, and there is no way to sugarcoat it. We expect a major storage containment problem before the summer kicks in.”

In the near term, BofA analysts expect to see a steeper decline than the forward markets are now reflecting, but a faster recovery in 2021 “as production collapses and demand recovers next year. Needless to say, any future inventory and price path is highly uncertain given the unprecedented dislocations.”

BMO Capital Markets on Monday said oil was “entering a danger zone over the next month due to the calamitous combination of plunging demand and rising supply.” If left unchecked, global oil and petroleum product inventories could be pushed to capacity, in part on the decision by the Organization of the Petroleum Exporting Countries (OPEC) and Russia to increase crude capacity in April.

“We believe that crude oil prices could fall below $10/bbl in order to force producers (and OPEC) to adjust their behavior,” BMO analysts said. “Brace for the carnage.”

Even so, lower oil prices may translate into higher natural gas prices by late next year, according to the Raymond James & Associates Inc. analyst team. “All else equal, the worse things get for oil, the better they get for U.S. gas (as U.S. associated gas production growth slows).”
Still, average U.S. gas prices this year are set to average $1.90/MMBtu, down from a previous Raymond James forecast of $2.30. For 2021, analysts said Henry Hub could average $3.50, reaching as high as $4.00 late next year.

Devon Energy Corp., one of the oilier producers in the Lower 48, on Monday cut capital expenditures (capex) for the second time in two weeks. The Oklahoma City-based independent in mid-March reduced capex by 30%, or $500 million, to $1.3 billion. It has now trimmed another $300 million, noting it plans to defer activity in the Eagle Ford Shale, improve efficiencies in the Permian Basin’s Delaware formation and work to reduce oilfield service costs across the portfolio. The management team said it was prepared to further reduce capital activity should commodity prices remain weak.

“Our top priority in this environment is to protect Devon’s financial strength and liquidity,” said CEO Dave Hager. “Our decisive actions to date have allowed us to rapidly recalibrate drilling and completion activity to ensure we can fund all our 2020 capital requirements within cash flow.”

Most of the publicly held exploration and production (E&P) companies and their OFS brethren working in the Lower 48 have cut capex to the bone. Overall, the picture is grim for the global sector.

E&Ps could reduce capex worldwide by up to $100 million this year, off by around 17% from 2019 levels, according to Rystad Energy. The updated base case scenario issued Monday is predicated on average oil prices of $34/bbl in 2020 and $44 in 2021.

“According to our data, the expected decline this year will make 2020’s capex volumes, estimated at about $450 billion, the lowest in 13 years,” analysts said.

Before the coronavirus epidemic, Rystad had estimated E&P spend would remain flat from 2019. However, with OPEC-plus getting ready to flood the market, oil prices are predicted to decline even more.

“As companies are now losing solid oil market ground for a second time in recent years, it will be far more challenging to act quickly and reach the same high level of investment revision without taking a heavy toll on E&P’s performance,“ said Rystad upstream analyst Olga Savenkova.

The estimated cost cuts mainly would be from lower activity in the Lower 48, delays to projects not yet sanctioned, deferred exploration activity and cost cuts in conventional production.

“As the most flexible of the supply segments in terms of cost reduction, U.S. shale players are expected to reduce their investments by about 30% year/year,” according to Rystad. “These measures will be quickly reflected in the oil market supply, with shale oil supply growth set to slow down in 2020.”

In a note, Royal Dutch Shell plc CEO Ben van Beurden said the one good thing about a crisis “is that it is usually over quite quickly. The aftershocks go on, but the emergency itself ends. That is not the case with Covid-19. It still has a long time to run.”

At the moment, things “feel bleak,” he said. “But this time of hardship, too, will — in time — end. The aftershocks will go on, of course, but the world will overcome what it is struggling with today. I have no doubt of that. Because when I look around at how the world is responding, I see signs of hope at every turn.”

“Natural gas is helping to power hospitals,” the CEO said. “Our chemical plants are diverting resources to producing isopropyl alcohol as fast as they can. This makes up about half the content of the hand-sanitizing liquid being used to keep the virus down around the world. And the fuels Shell is producing are powering the trucks bringing food from warehouses to shops… and powering the ships getting goods from around the globe to restock the warehouses.”

Van Beurden said his advice to employees is to keep going.

“The calm people have shown has allowed the company to keep making the critical products the world needs right now. We must stay calm. And our resilience as a company has got us this far, and I know we will stay resilient to get us through all the days, weeks and months to come. Just as the resilience shown in the wider world will pull it through the crisis that surrounds us all today. This is, indeed, an unprecedented crisis. But we, all of us, will overcome it.”

In other news, Centennial Resource Development Inc. CEO and Chairman Mark G. Papa has accelerated his retirement to Tuesday (March 31) from May 31 apparently because of a disagreement on how the Permian-focused operator should react to the slumping market conditions.

The news was provided in a Form 8-K filing to the Securities and Exchange Commission.

“Papa stated that his views on how the company should respond to the recent weakness in the oil markets and changing macro conditions have differed from other members of the board and that he believed accelerating the effective date of his retirement may better position the board to reach a consensus on the appropriate direction of the company,” the filing stated.