A growing number of applications beyond transportation, such as wildfire and climate change mitigation, have added impetus nationally to find more commercially viable battery storage solutions, according to a senior electrical engineer who is leading research efforts in California. 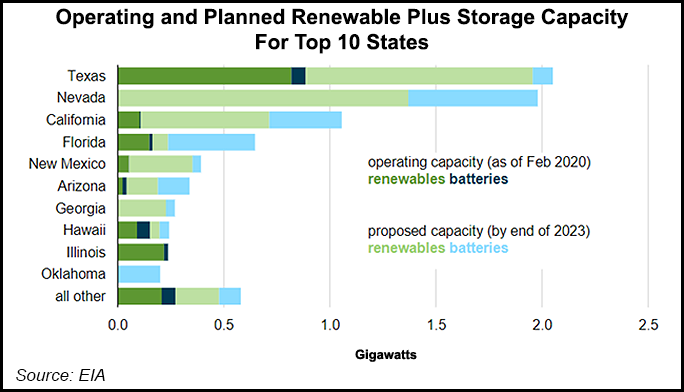 Americans have become more intolerant of power outages, whether from natural disasters or otherwise, and battery storage appears to offer options when the grid is down.

“People began to realize the value of reliability, and it is bringing a lot more attention to storage that can provide a day or multiple days of coverage,” said senior electrical engineer Mike Gravely of the California Energy Commission (CEC). He is leading the CEC’s Energy Technology Systems Integration team.

The California Public Utilities Commission in June is expected to vote on a microgrid deployment program that would be included in the state utilities’ public safety power shutoff (PSPS) efforts to lower the risk of wildfires. The aim is to provide so-called “resiliency projects” during grid outages and allow storage devices to charge from the grid during pre-PSPS hours.

“There are only a limited number of manufacturers of the batteries, maybe five or six, while there are hundreds of different distributors that generally are relying heavily on the transportation batteries,” said Gravely.

Other start-ups are working on long-duration storage, including Somerville, MA-based Form Energy. Form, headed by scientists affiliated with the Massachusetts Institute of Technology, recently announced the first commercial deployment of a proprietary long-duration energy storage system with Minnesota-based Great River Energy. The 1 MW/150 MWh pilot project is in Cambridge, MN.

In the public sector, support is backed by the U.S. Department of Energy’s (DOE) $24.9 million Joint Center for Energy Storage Research, formed to advance promising areas of energy science and engineering from the earliest stages to commercialization. The center, led by Argonne National Laboratory, seeks to design and build “transformative materials for next-generation batteries,” according to its website.

At DOE’s Argonne Laboratory, researchers have created and tested a single-crystal electrode that promises to lead to key discoveries for advanced batteries worldwide for EVs, consumer electronics and other applications.

“The technology is expanding,” Gravely said. “I just think there will be a limit on how far lithium-ion technology can go. I don’t think we have reached that limit yet, and there are quite a few emerging technologies. There are a lot of things in play that aren’t as advanced yet as lithium-ion is.”

Innovations such as eliminating cobalt are worthwhile developments, but Gravely said it is more applicable to transportation uses than in the stationary uses he is researching.

“Cobalt gives you high power and prevention against fires,” he said. “And historically cobalt has been used in EVs, but it is starting to be used in stationary applications. Utilities are signing long-term contracts for lithium-ion batteries used in storage projects.”