Even given the many unknowns related to the market impact of the coronavirus pandemic on both sides of the border, Mexico will remain a key destination for U.S. natural gas producers for years to come, according to analysts. 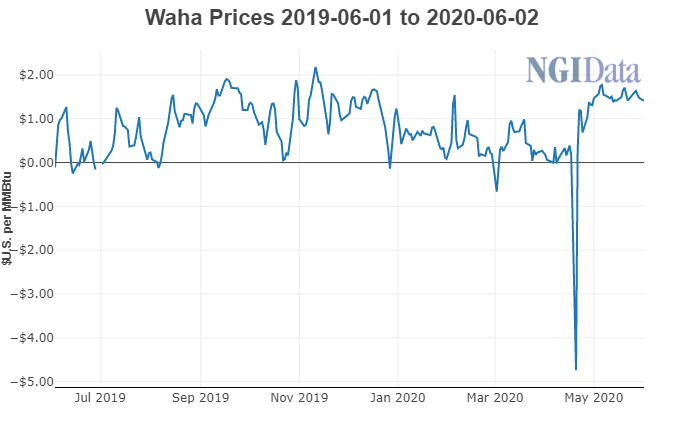 “With that said, we continue to forecast a year/year uptick in Mexican gas exports as pipeline volumes displace LNG imports as well as crude.”

Pipeline natural gas exports from the United States to Mexico are coming in lower year/year, but the slow reopening of the Mexican economy starting this week may increase transported volumes heading south of the border.

Genscape Inc. said pipeline exports from the Lower 48 to Mexico averaged an estimated 4.5 Bcf/d during the first half of May, which is down from 4.95 Bcf/d reported in May 2019 by the Energy Information Administration (EIA). Meanwhile, on the Mexico side, pricing should remain favorable for end users as Southern U.S. pricing points continue to impact the price of natural gas bought in Mexico.

“The United States provides more than 50% of Mexico’s natural gas consumption, and we believe more than half of all gas bought and sold in Mexico is done directly to U.S. indexes,” said NGI’s Patrick Rau, director of Strategy & Research. He added that for Mexico, the three most important price indexes are Henry Hub, Houston Ship Channel, and Waha.

[NGI’s Patrick Rau and NGI Senior Editor Christopher Lenton will take part in a webinar on this topic in partnership with Bloomberg this Thursday at 3 p.m. Eastern. To register, click here.]

Unlike most gas markets across the Lower 48, which have struggled in the face of weak demand from the Covid-19 pandemic and a lack of widespread heat, Permian Basin pricing has fared well recently.

That’s largely because the pullback in oil-directed drilling in the producing region has lessened the production of associated gas. Last week, Genscape noted that Permian gas output was down around 443 MMcf/d from last Tuesday through Thursday (May 26-28).

Even still, “the resumption of growth in Permian crude output should continue to put downward pressure on basis differentials at Ship Channel and Waha going forward,” Rau said. “Certainly not as much as before the production curtailments and dramatic declines in 2020 capex spending, but there are still some major producers with big long-term production plans in the Permian.”

“Even if Mexico reaches its unlikely target of domestic production of around 5 Bcf/d for 2024, from about 3.8 Bcf/d today, imports from the United States will remain crucial to fulfill local demand,” Lenton said. “In last year’s 2019-2033 Prodesen power sector development plan published by energy ministry Sener, combined-cycle plants accounted for 42% of planned 70 GW in development, and if anything we’re seeing more of a tilt towards natural gas power than before.”

Rau and Lenton will take part in a webinar on this topic in partnership with Bloomberg this Thursday at 3pm Eastern. To register, click here.