Opponents are once again lining up to challenge long-pending natural gas pipelines in New York after the projects scored recent victories at both FERC and in the courts, signaling that an uphill battle is still ahead to get the infrastructure in service after years of delays. 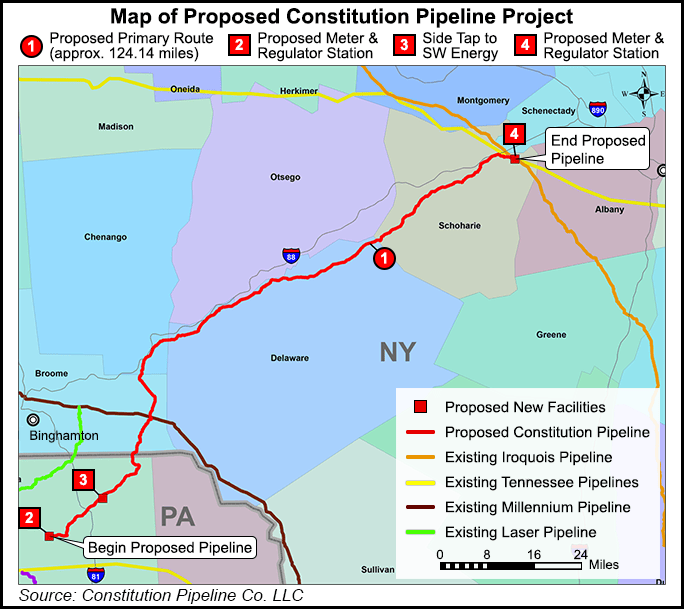 Constitution Pipeline finally got a second chance in February when the Federal Energy Regulatory Commission indicated it would reconsider a decision made last year about whether New York took too long to issue a water quality certification (WQC). The Commission had refused to waive the New York State Department of Environmental Conservation’s (DEC) authority, finding that the agency didn’t fail to act on Constitution’s WQC within the one-year timeframe required by the Clean Water Act, as the sponsors had argued.

FERC plans to reconsider the matter following a ruling by the U.S. Court of Appeals for the District of Columbia (DC) in an unrelated hydropower case that favored Constitution and addressed similar issues. ClearView Energy Partners LLC noted that there’s a strong likelihood that FERC could reverse its initial decision, clearing a path for Constitution to start construction if it can jump other hurdles that remain. Others agree.

“None of us really want to read tea leaves, but it seems kind of clear based on the Hoopa Valley precedent that Constitution should be getting a positive order from FERC,” said energy attorney Steven Weiler of Dorsey & Whitney LLP, referring to the DC Circuit’s ruling in the hydropower case.

However, the head of the Delaware Riverkeeper Network, Maya van Rossum, whose organization has intervened in cases challenging Constitution, called FERC’s move to reconsider its decision a “line in the sand kind of moment,” adding that it’s a “bridge too far” that trumps states’ rights and could provide an easy path forward for other pipeline projects in the future.

“What may be too early to say exactly is the how, and all the partners that hop on board and what will be the arguments and approaches that are used,” she said of the potential response to any gains made by Constitution. “But I don’t think it’s too early to say that there will be tremendous uprisings in opposition.”

If FERC were to waive New York’s WQC review, there are still other issues to work through. The project needs a new Section 404 permit from the U.S. Army Corps of Engineers, and it’s unclear how long that review might take. Constitution’s FERC certificate also faces a challenge in the U.S. Court of Appeals for the Second Circuit by several environmental groups.

Attorney Anne Marie Garti represents Stop the Pipeline, formed to oppose Constitution. It is one of the groups challenging the certificate. She said the organization doesn’t believe the Hoopa Valley decision will result in a waiver of New York’s authority. But she declined to discuss the strategy if that happens, noting only that “you can be sure we would not roll over.”

Like Constitution, the DEC denied a WQC for National Fuel Gas Co.’s Northern Access expansion project. However, FERC later waived the state’s authority. The Second Circuit recently vacated the state’s denial as well. Despite those gains, construction has yet to start on Northern Access. Both pipelines would move shale gas from Pennsylvania to New York and beyond.

National Fuel spokesperson Karen Merkel said the company is working to secure other federal authorizations, including Section 404 permits, while a number of legal matters “at various stages” are pending in different venues. “We remain committed to the project and intend to request a notice to proceed from FERC once all necessary authorizations are secured,” Merkel said.

Even if both projects manage to work through all the setbacks, Weiler said they’re likely to face additional litigation. Environmental groups in the Northeast have looked beyond WQC reviews. They’ve successfully targeted various federal and state approvals for both the Atlantic Coast and Mountain Valley pipelines, which has repeatedly forced costly work stoppages and delayed those projects.

“These environmental statutes and agencies are being used to delay,” Weiler told NGI. “But then also, as we saw with the New York DEC, they’re used to just kill them outright. And so, look for a combination of delaying and slaying on a go forward basis. I think you’ve seen the play written. It’s not going to be anything really creative after this, just more of the same.”

Energy In Depth’s Dan Alfaro, a spokesman for the industry outreach group, agreed, saying similar tactics are likely to continue for the projects in New York. He noted too that the delays have so far been costly, pointing to a recent report from the U.S. Chamber of Commerce’s Global Energy Institute. The study found that the years Northern Access and Constitution’s backers have spent fighting the state instead of bringing the lines into service have cost more than $5 billion in gross domestic product.

Indeed, even projects that haven’t yet received FERC certificates, such as Transcontinental Gas Pipe Line Co. LLC’s (Transco) Northeast Supply Enhancement (NESE), are facing roadblocks. NESE would expand Transco to increase deliveries to National Grid, the largest gas distributor in the Northeast. The project is designed to create 400 MMcf/d of incremental firm capacity to Northeast markets, primarily to feed demand for gas in New York City.

The DEC recently closed a public comment period for the project as it’s expected to make a decision on a WQC by May 15. So far, more than 60 federal officials have urged New York Gov. Andrew Cuomo to reject the pipeline, while a petition with 16,000 signatures and more than 250 groups in the state have emerged in opposition, according to 350.org.

A report released last week by 350.org argued NESE is not needed, claiming gas demand is flat in the region and alternatives are readily available to match future growth. 350.org’s Richard Brooks, a campaign coordinator, told NGI that the same applies to other projects like Constitution that would supply New York City.

He said measures that have been implemented and advanced by the Cuomo administration, in particular proposals under a Green New Deal for the state, would offset the need for energy provided by natural gas. Brooks said if Northern Access and Constitution eventually start construction, he believes court challenges and a “grassroots mobilization” would quickly emerge to stymie the projects.

“I think what you would see as well, given the ground that the governor is now staking out, is that he would come out against that project,” Brooks said when asked specifically about Constitution.

Cuomo, a Democrat, has resisted expansions to gas infrastructure. His administration is targeting some of the nation’s most aggressive goals to reduce carbon dioxide emissions by 40% by 2030 and 80% by 2050. The state legislature is also under Democratic control. As a result, the Climate and Community Protection Act, Brooks said, could pass this year. The bill would mandate an economy-wide shift to renewable energy.

For its part, the DEC has filed for rehearing of FERC’s decision to waive the state’s authority on Northern Access. Spokesperson Erica Ringewald said the agency also plans to submit comments on the Hoopa Valley ruling as FERC accepts them until Monday (April 1), ahead of its decision to reconsider a waiver for that project. A Constitution spokesman also said the project plans to make a filing by the deadline.

As far as NESE is concerned, Brooks said that if DEC issues a WQC and the project advances, he expects opposition groups to continue challenging that project in the courts, noting that the state has become a “real battleground” for the future of energy in the Northeast.

In response to the 350.org report, a National Grid spokesperson said the company stands by its forecasted gas demand for the region. The utility has warned of moratoriums on gas service like those already imposed by Consolidated Edison Co. in Westchester County, NY, if the pipeline is not built. Williams, a sponsor of both NESE and Constitution, was more pointed.

“Natural gas is a critical component of the mix of energy sources necessary to meet the region’s growing energy needs and to help meet its aggressive clean air goals,” Williams spokesman Christopher Stockton said. “It is a fact that the current pipeline infrastructure is operating at capacity, and the utility company responsible for providing reliable natural gas service to 1.8 million consumers across New York City and Long Island has determined that capacity needs to be enhanced in order to keep pace with future demand and avoid gas supply constraints.”

With the stage set for further battles in the region, Weiler said it’s still likely that all the projects will get built, saying it’s just a matter of time.

“We might be in a new normal, where all sorts of concerns are litigated in a number of different fora, and it just might take a little longer to get infrastructure projects built.”