Piped U.S. natural gas exports to Mexico should remain an important part of energy trade, despite rhetoric from President Trump and his Mexican counterpart AndrÃ©s Manuel LÃ³pez Obrador that threaten the relationship, according to two experts on the subject. 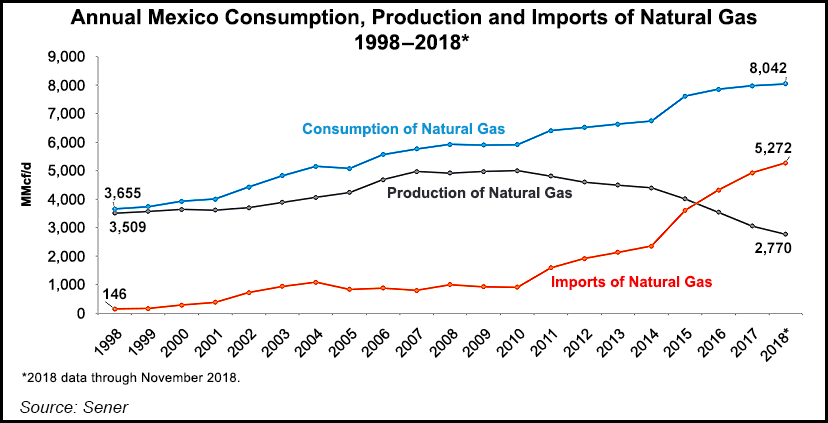 On the U.S. side, natural gas exports are a boost to the national economy, with Mexico pipeline exports currently worth $6.5 billion/year, according to a senior fellow at the Center for U.S.-Mexican Studies at the University of California San Diego, John B. McNeece III. Any attempt by the Trump administration to apply pressure on the Mexican state through restricting natural gas likely would see considerable pushback.

“Gas producers would fight back,” McNeece said earlier this month in a webinar organized by think tank Institute of the Americas. Moreover, the U.S. Constitution prohibits tariffs on exports, thereby making an export tax on gas exports to Mexico “highly unlikely.”

On the Mexican side, NERA Economic Consulting’s Veronica Irastorza suggested that even if LÃ³pez Obrador were to meet his lofty goal of growing gas production by 50% during his six-year term, Mexico would still require gas imports to meet rising demand.

Mexico’s national oil company PetrÃ³leos Mexicanos (Pemex) seeks to ramp up production to reach 5.7 Bcf/d by the end of 2024. However, projections from the energy ministry (Sener), indicate gas consumption in Mexico will exceed this figure by around 3 Bcf/d in 2024.

In the first nine months of 2018, natural gas exports via pipeline from the United States into Mexico grew 11.2% year/year to reach 1.25 Tcf, or 4.6 Bcf/d, according to a report from the U.S. Department of Energy (DOE).

Prices, a significant boost to competitiveness of Mexico’s industry and power plants, will also remain attractive, despite the projected boom in liquified natural gas (LNG) from the United States, according to Irastorza. The EIA predicted that gas prices should remain comparatively low through 2050.

Crucially, the cross-border infrastructure for gas trade is already in place. As of 2016, Mexico already had 7.5 Bcf of cross-border capacity. The Centro Nacional de Control del Gas Natural (Cenagas) is predicting it to increase to to 13.5 Bcf this year. Meanwhile there is a total of 15 Bcf of either existing, or authorized cross-border capacity, according to McNeese. Indeed in any calculation, capacity exceeds expected deliveries. But “developers think it’s needed and are putting their money on the line to support that,” he said.

Irastorza is expecting the Mexican gas market will continue its process of deregulation through the LÃ³pez Obrador years, leading to the creation of secondary and futures markets.

“I think it is possible, because Mexico has already been moving in that direction,” she said, “and if you see the latest Cenagas rates for example, they are moving to this direction of having a clear cost-based incremental tariff. So I am hopeful, and it is likely that we can move there.”