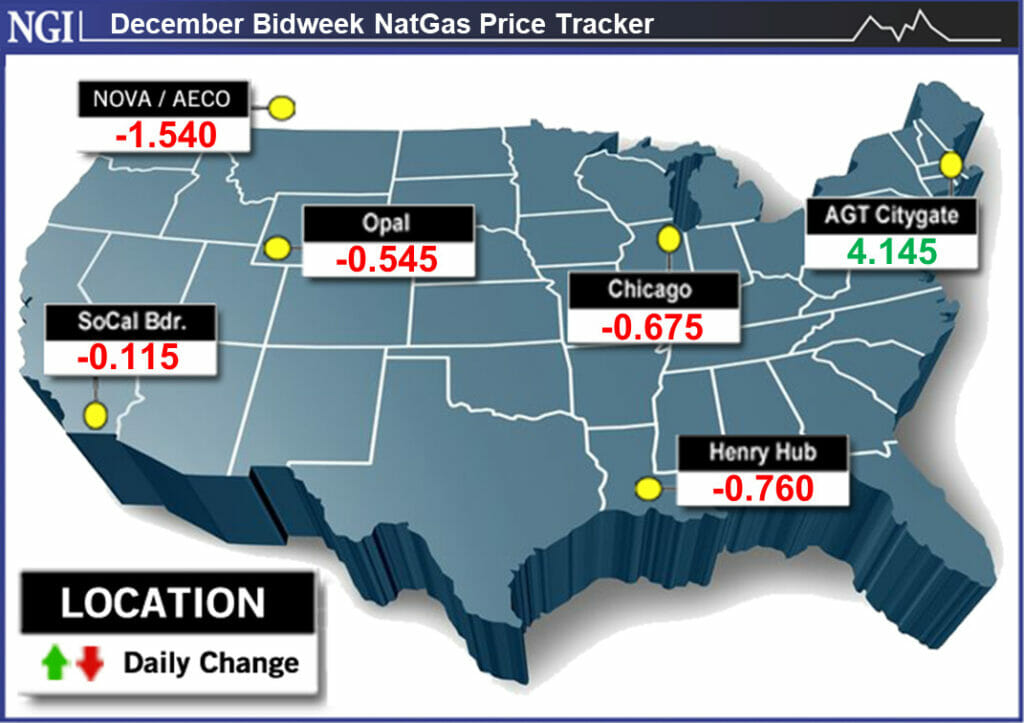 NGI’s December Bidweek National Avg. shed 24.0 cents month/month to $5.890/MMBtu. Still, that more than doubled the $2.720/MMBtu average for December 2020, when prices were recovering from the demand destruction imposed by the coronavirus pandemic.

Gas traded Nov. 22-24 was for December baseload delivery. NGI decided in May to move to a three-day trading bidweek period, which was implemented beginning with the October 2021 bidweek.

A wintry mix of rain and snow pushed into the region during the period, ushering in frosty highs of 30s to 40s and lows in the teens and 20s, galvanizing natural gas demand and boosting physical prices.

However, weather conditions were benign in most other regions during the period, delaying the onset of winter heating demand and dragging down prices across most of the Lower 48.

The European weather model on Wednesday showed “exceptionally warm and bearish” conditions through mid-December, when temperatures are projected to come in around 10-30 degrees warmer than normal over “vast stretches” of the country, according to NatGasWeather.

“What continues to make the weather data extremely bearish is the end of the 15-day forecast remains much warmer than normal over the important southern and eastern U.S., suggesting bearish weather headwinds will carry over to forecast days 16-20 as well,” the firm said.

Against that backdrop, the January Nymex contract plunged over its first two days as the prompt month – Monday and Tuesday of this week – losing 91 cents and reaching its lowest closing price since August. Futures faltered further on Wednesday, losing another 30.9 cents and settling at $4.258/MMBtu.

Natural gas futures had rallied in October amid robust demand for U.S. exports of liquefied natural gas (LNG) and expectations for strong domestic demand heading into winter. But forecasts proved persistently bearish in recent weeks and pulled the prompt down 16% in November.

The U.S. Energy Information Administration (EIA) posted a withdrawal of 21 Bcf pull for the week ended Nov. 19. That left working gas in storage at 3,623 Bcf, just 58 Bcf below the five-year average. It marked the first pull of the heating season; often withdrawals begin by early November.

At the same time, output in November climbed above 96 Bcf – near 2021 highs – and hung near or above that level much of the month, indicating that producers could help meet winter-driven spikes in demand.

“While warm weather continues to pressure the front end of the curve, we are more concerned by a sustainable jump in supply that has pushed production to 96.5 Bcf/d” in recent days, analysts at Tudor, Pickering, Holt & Co. (TPH) said Wednesday. For now, “it looks like producers may want to brace for more downside to fundamentals.”

For all the bearish elements, however, bulls still have reason for optimism. Strong demand for U.S. LNG is widely expected to continue through the winter. Destinations in both Asia and Europe are calling for more U.S. exports of the super-chilled fuel as they brace for the winter months. LNG feed gas volumes held above 11 Bcf throughout bidweek and exceeded the 12 Bcf level several times during November, according to NGI estimates.

Natural gas storage in Europe is precariously light following extreme weather and robust demand in 2021. Russia has vowed to ramp up pipeline supplies to Europe, but that has proven a bumpy process.

Delays in delivering more Russian gas via the recently completed Nord Stream 2 pipeline to Germany – stemming from both regulatory challenges and U.S. sanctions against Russia – amplified already simmering concerns about supply shortages on the continent. Japan and other major countries in Asia, meanwhile, are clamoring for LNG shipments as well, looking to maximize storage in the event of a harsh winter.

What’s more, while the onset of winter weather has proven relatively slow this year, the peak demand season for natural gas nevertheless lies ahead. Outlooks call for widespread freezing conditions in Europe by mid-December and sustained cold in the Lower 48 by late this month.

Analysts were anticipating the next EIA inventory report, to be released Thursday, to show a substantially steeper pull for the week ended Nov. 26. Preliminary estimates were hovering in the high 50s Bcf. NGI’s model predicted a net 58 Bcf withdrawal.