Mexico President Andrés Manuel López Obrador said during his daily press conference on Tuesday that his government would work toward a constitutional reform in the electric power sector. 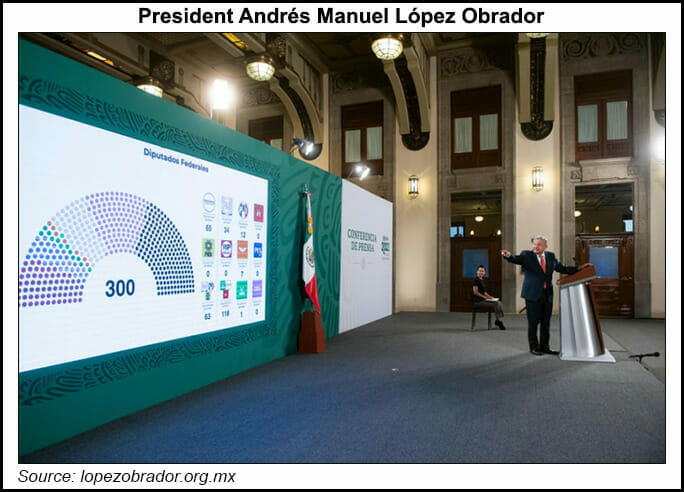 “We need a reform so that domestic users, and the poor and middle class, don’t pay more for their electricity than big corporations,” he said.

The president said his aim wasn’t that “private companies disappear; they are going to continue.” However, state utility Comisión Federal de Electricidad (CFE) should be guaranteed 54% of the power generation market.

Earlier this year the president, who often goes by the nickname AMLO, pushed a bill through Congress that amended the Electricity Law and gave CFE priority in power dispatch over private sector generators. The changes, however, have been held up in court.

“I didn’t want to get to a constitutional reform in electric power, and that’s why we modified the law,” he said.

Lopez Obrador said he would make the move as soon as the end of this year. He also wants to push for constitutional reforms in security and the electoral system. The hydrocarbons sector was not mentioned.

López Obrador may find he won’t have the support in Congress to make constitutional changes. A group of experts discussed the president on Tuesday during a virtual event sponsored by the Wilson Center think tank.

In the June 6 midterm elections, which was the largest vote in Mexico’s history in terms of total positions in play, López Obrador’s Morena party lost significant congressional support.

“Morena lost positions, and now they are far away from the supermajority,” needed for constitutional changes, said Mexican political commentator Leo Zuckermann during the webinar.

Zuckermann said one of the main winners of the election was Morena’s rival Partido Revolucionario Institucional (PRI) party. The PRI ruled over Mexico for most of the 20th century.

“AMLO needs the support of the PRI if he wants to amend the constitution,” Zuckermann said.

The Green Party, which won 40-48 seats in the 500-person lower house and has no clear ideological allegiance, would also be key to any attempt at major legislation.

Zuckermann called the election a sign of “democratic normality” in Mexico. “The debates that we are having now in Mexico are very democratic. The discussion is about institutions, not about a one-man, one-party system.”

El País columnist Viridiana Ríos during the webinar said that given the coronavirus crisis and that as many as 10 million Mexicans could fall into poverty as a result, Morena’s showing was better than expected.

“This midterm should have been a heavy blow to Morena,” Rios said. “But it was not. Morena did fairly well.” However, the president emerged from the elections in a weaker position, she said. In particular, he lost support among college-educated voters and those who had lost jobs during the pandemic.

Overall, the experts agreed that Mexican democracy was the winner in the election.

“There is a clear and strong desire for more options, and for pluralism, which is a good sign for the future of Mexican democracy,” said University of California, Santa Barbara professor Kathleen Bruhn. Asked whether there is a chance that López Obrador would push to change the constitution so that he could run again, Burhn said “the odds have gone down.”

Analysts at Eurasia Group said if legal challenges to the president’s energy policy persist, “López Obrador will likely try to find alternative ways to gain backing for his plans. For example, he could hold public consultations to show they have strong public support.”

The ongoing legal uncertainty and the administration’s policies “will continue to undermine business confidence and investment in the energy sector,” analysts said. Still, “López Obrador is convinced that his state-centric plans are good for the energy sector and the country and is unlikely to change them despite the setbacks.”