New wells in the Marcellus Shale kept natural gas production there on the upswing in May, but declines in several other areas kept total U.S. production to 81.84 Bcf/d, just 0.3% higher than the 81.61 Bcf/d reported in May 2012, according to the Energy Information Administration (EIA). 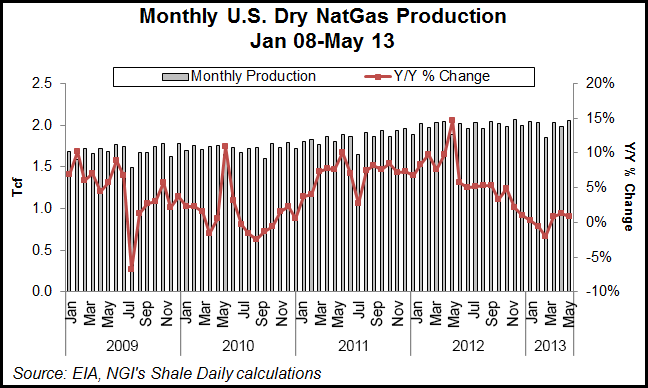 The Other States category, which excludes Louisiana, New Mexico, Oklahoma, Texas, Wyoming, Alaska and the federal offshore Gulf of Mexico, but includes key Marcellus state Pennsylvania, increased production to 25.62 Bcf/d in May, up 3.30 Bcf/d from 22.42 Bcf/d in May 2012, according to EIA’s latest Monthly Natural Gas Gross Production Report. The category’s increase came “as several operators reported new wells in the Marcellus Shale,” EIA said Wednesday.

In its latest Natural Gas Monthly, also released Wednesday, EIA said dry gas production for May was 2.051 Tcf (66.2 Bcf/d), which was up marginally from 2.034 Tcf in May 2012 and the highest level since last October, when 2.063 Tcf was produced. Total consumption of natural gas for May was 1.740 Tcf, the fourth consecutive month with a sequential decline and also a decline from the 1.871 Tcf reported in May 2012, EIA said.

EIA is considering breaking out monthly gas production data for several individual states currently lumped together into the “other” category to reveal more precisely production coming out of shale plays (see Shale Daily, April 3). The Marcellus Shale covers parts of Pennsylvania, West Virginia, Ohio and New York, and it is considered to be the most productive shale gas basin in the country. The great bulk of production from the formation is in Pennsylvania. Shale production is also booming in Texas and North Dakota.