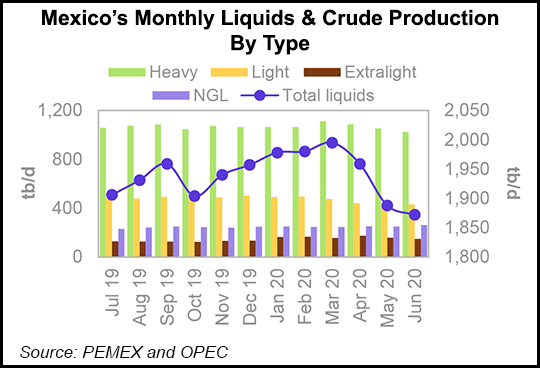 Latin American liquids production is expected to rise 2.27% to 6.19 million b/d this year even as global oil demand has plummeted, according to the latest monthly report issued by the Organization of the Petroleum Exporting Countries (OPEC).

The figure does not take into consideration Venezuela, Latin America’s only OPEC member, where oil production has fallen dramatically and registered a mere 339,000 b/d in July.

Latin American non-OPEC production increases will be driven principally by Brazil, where crude oil production rose 25,000 b/d in June following declines from February to May.

Output in pre-salt offshore areas was the main reason for production recovery in June, particularly from the Lula field, OPEC said. Brazilian oil production in the second half could be higher than the first half as new projects continue to ramp up. Brazil’s liquids production in 2020 is forecast to increase by 20,000 b/d to 3.74 million b/d.

In Mexico, preliminary production figures for July indicate higher liquids output compared to June. Output averaged 1.91 million b/d in July, according to OPEC. In addition, production should also rise in August, “supported by the ramp-up of new fields that will produce light crude and condensate.”

State oil company Petróleos Mexicanos (Pemex) expects to add a further 95,000 b/d by December through 28 new wells. OPEC noted that Pemex has already spent 42% of the planned capital expenditures for 2020, “but it is unclear whether they will spend the full allocated amount by the end of year.”

In Argentina, oil production is likely to see growth in July, as “part of the Vaca Muerta shale has been recovered,” OPEC said, while oil production in Ecuador has now recovered from outages in April and May and grew by 14,000 b/d month/month in June to average 500,000 b/d.

Meanwhile OPEC sees global oil demand declining by 9.1 million b/d this year, with demand in 2021 expected to rise by 7 million b/d. Because of the coronavirus impact, OPEC now sees global economic growth this year falling by 4%, compared to July’s forecast of a 3.7% decline.

“Going forward, economic activities in Latin America are expected to be pressured by a number of factors, including rising Covid-19 cases, political tensions and weakness in currency values, affecting the labor market and tempering consumer confidence,” researchers said.

OPEC revised higher the liquids supply forecast from countries that are not members of the cartel, which include the United States. Researchers expect output in non-OPEC countries to be around 235,000 b/d higher than in the previous month’s report because of a “better-than-expected recovery in the second half, leaving output on track for a 3.03 million b/d decline year/year.”

Venezuela stands out in the analysis with its oil and gas sector appearing to be in complete freefall.

Analysts at IHS Markit published another analysis Thursday showing figures that are significantly lower than OPEC’s. Venezuelan crude oil production is currently around 100,000-200,000 b/d, and falling, compared to 650,000 b/d last year and around 2 million b/d in 2017, according to IHS. It is now conceivable that the country could soon be producing zero barrels, or very close to it, analysts said.

“Never before has a former major oil producing country seen output fall so low for so long. In Venezuela’s case, if there is any surprise it is that the disintegration did not happen faster,” said  Jim Burkhard, vice president and head of oil markets.

The country is now the third-lowest producing member of OPEC, yet its decline has so far had very little impact on global markets.

“In terms of market impact, if you had to choose a time for the fall of a major global oil producer — a founding member of OPEC, no less — this would be it. There is ample production capacity around the world to satisfy the recovery in world oil demand that has been underway since May,” Burkhard said.

Given the country’s reserves, a comeback somewhere in the future is always a possibility, but the state of Venezuela’s infrastructure, ongoing U.S. sanctions and lower global demand make it increasingly unlikely, according to IHS.