National Oilwell Varco (NOV) said that despite low world oil prices, it has letters of intent to acquire several unspecified companies in the oilfield equipment sector and is seeking additional merger and acquisition (M&A) opportunities in the field, as it continues its stock buyback program and reduces its backlog for new rig systems. 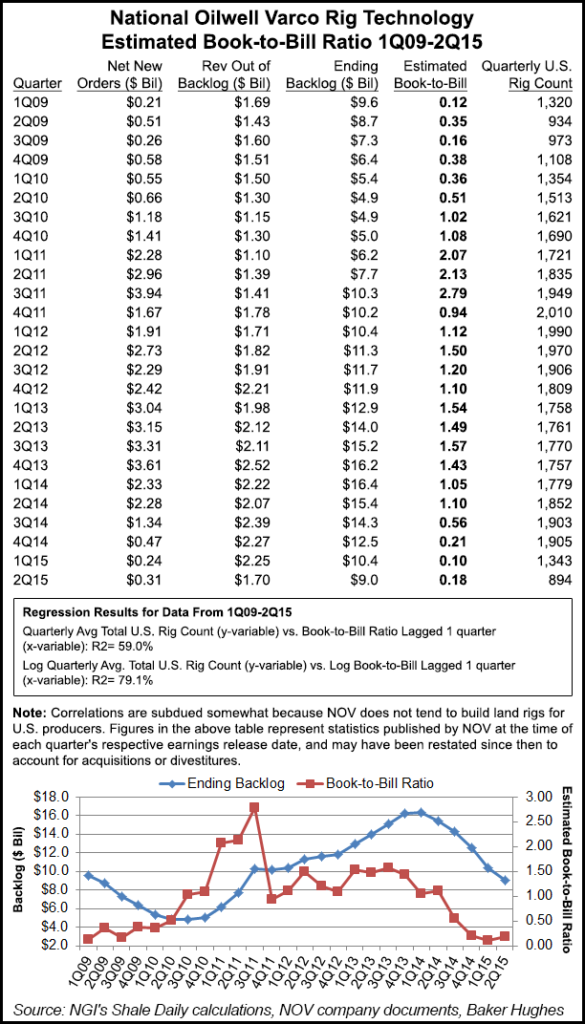 During a conference call Tuesday to discuss 2Q2015 earnings, CEO Clay Williams said the Houston-based company has already closed on three acquisitions in 2015, and it has expanded its revolving line of credit to $4.5 billion during the quarter to pursue M&A opportunities that he believes will emerge while oil prices remain low.

“We are actively seeking M&A opportunities, but to be clear, we will be disciplined in our approach,” Williams said. “We have closed three bolt-on acquisitions so far this year and have letters of intent with several more, but thus far we find making the bids…continues to be a challenge.

“As most of you know, we have a long history of building NOV through acquisitions, and we have a lot of experience in this area. That experience teaches us to be patient…until it is time to be otherwise.”

“At this point, we are expecting orders to remain roughly flat in 3Q2015 but to start to pick up in 4Q2015, driven by higher demand for land rigs, and rising inquiries around capital components,” Williams said. “Offshore order recovery is still many quarters away, and we expect [national oil companies]-driven jackup demand to recover before floaters.”

“We expect [completions and production] orders to remain low in 3Q2015, although we may get some incremental help from flexible pipe orders,” Williams said.

The CEO added that while the company’s customers are “very good” at reducing spending when oilfield activity declines, it’s not sustainable because they will soon run out of equipment they have on the shelf, and will run out of idled rigs they can raid for parts, components and drill pipe.

“Our visibility into the ‘how long they can live’ destocking and cannibalizing varies by product,” Williams said. “We know drill pipe, for instance, is cannibalized from idled land rigs by some, but not all, drilling contractors, and [drill pipe] is probably a year away from meaningful recovery. On the other hand, some products feel much closer to the turn. We are beginning to see some inquiries come in for drilling motor parts and relines. Last week we began to see some new orders for fiberglass pipe…

“A few weeks of improved order inquiries does not necessarily signal the turn around, and we are hesitant to call bottom just yet. But we know from past downturns that once the rig count stabilizes, the end of destocking and cannibalization is just a matter of time. I would add, too, that I don’t believe that fastidious equipment maintenance, for the long run, is at the top of our customer’s priority list right now. Equipment is run hard in the field and just parked next to the fence and hosed down. Customers living hand-to-mouth aren’t sure if it will ever get another job and sure don’t want to put cash into equipment without a firm job on the board.”

In a note Tuesday, analysts with Tudor, Pickering, Holt & Co. (TPH) said revenue from NOV’s rig systems segment for the second quarter, $1.93 billion, was higher than expected. The firm also took note of the company repurchasing and retiring 8.6 million shares of its common stock at an average price of $51.73/share, for a total purchase price of $447 million. Since initiating the buyback program last September, NOV has repurchased 44.7 million shares, or 10.4% of its shares outstanding.

“NOV continues to be a dominant player in its various businesses,” TPH said. “There’s not a whole lot of bright spots in their end markets, so executing well is really all they can control.”