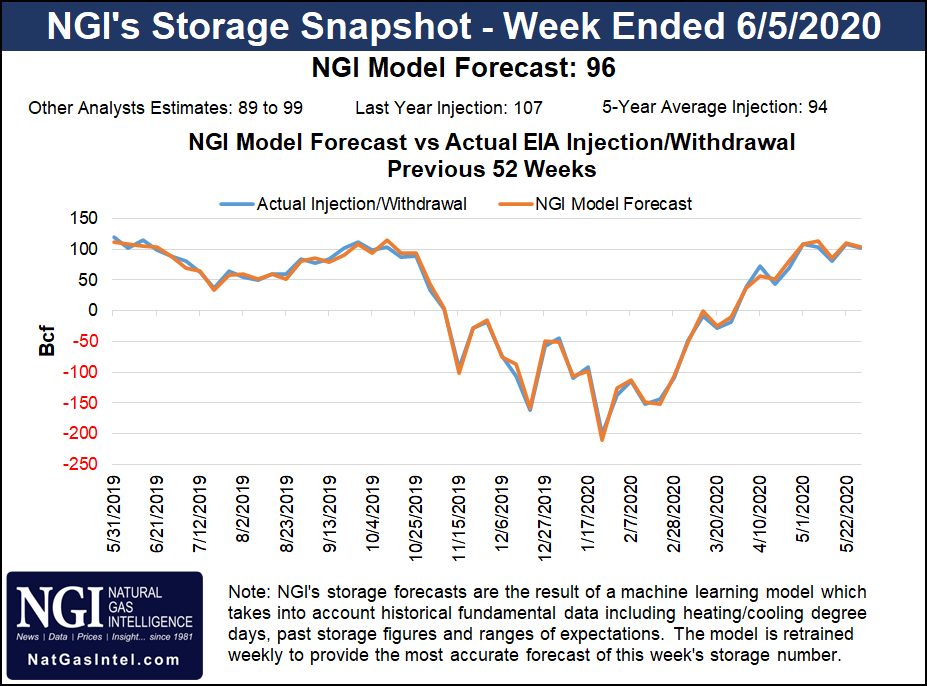 The firm expects a cooler period Friday through Tuesday in the eastern United States before more heat returns in the middle of next week, increasing the likelihood of greater gas-weighted degree day (GWDD) totals for June overall. The current month is “on pace to rival 2018 and 2016 for the highest June GWDD count since June 2011,” and that is “notable given the tendency for hotter summers over the last 10 to 15 years.”

Genscape Inc. said Lower 48 power burns have ramped up since late May “as summer begins in earnest.” The firm said burns breached 35 Bcf/d on June 3 and then did so again Tuesday and Wednesday.

Though temperatures have fluctuated in some regions this month, cooling degree days (CDD) are expected to increase up to 3.7 average CDDs above normal between June 19 and June 22, Genscape said. By extension, it expects power burns to exceed 37 Bcf/d for the first time on June 18 and sustain that level on ensuing days.

On the storage front, EBW Analytics Group said Thursday’s report from the Energy Information Administration (EIA) “could be important” since it may provide “more insight into how the supply/demand balance is shifting at a time when supply and demand are both in flux.”

A lower-than-expected build for the week ended June 5 could signal increased industrial demand as factories formerly idled amid the pandemic reopen and drive power usage.

A Bloomberg poll of nine analysts found injection estimates ranging from 91 Bcf to 99 Bcf, with a median of 94 Bcf, on par with the five-year average. A Wall Street Journal survey produced an average of a 93 Bcf injection. NGI estimated a 96 Bcf build.

Last year, the EIA recorded a 107 Bcf increase in storage for the similar week.

On Tuesday, the EIA said in its latest Short-Term Energy Outlook that it expects gas demand to increase next winter while production eases, creating upward price momentum and resulting in Henry Hub spot prices averaging $3.08/MMBtu in 2021. Henry Hub prices this year, however, are expected to average just $2.04/MMBtu.

Case in point: The International Energy Agency (IEA) predicted Wednesday in its annual market report Gas 2020 that natural gas consumption would drop by 4% this year, or 150 billion cubic meters. That would double the loss following the 2008 financial crisis.

“The record decline this year represents a dramatic change of circumstances for an industry that had become used to strong increases in demand,” said Fatih Birol, IEA’s executive director.

Producers are trying to reach a balance. Dry gas production appears to have bottomed out last month, coming in at about 83 Bcf/d on May 20, according to Bloomberg.

While IEA expects that LNG will continue to drive international trade, demand for exports is likely to remain weak in the near term relative to pre-coronavirus pandemic levels. China has in recent weeks stepped up LNG importing, but across Asia and Europe overall, demand remains soft amid low prices and modest economic activity in the pandemic’s wake.

“Chinese demand appears to be fully back and then some, up 10% month/month and 25% year/year, driven largely by swapping of cheaper LNG volumes in place of pipeline imports, which were down 20% year/year,” analysts at Tudor, Pickering, Holt & Co. (TPH) said. But, they added, Japanese imports were at the lowest level in 10 years. Japan has been the world’s biggest LNG importer.

From a U.S. perspective, the TPH analysts added, “we see 45% LNG export utilization through Q3 being the magic number that balances global LNG markets and also keeps European storage within capacity.”

Bespoke noted that Wednesday data showed LNG up about 0.3 bBcf, “though still very low, with absolute volumes under 4.0 Bcf once again.”

Solid power burns provided mostly modest boosts to spot gas prices in several regions of the country Wednesday, though prices were lower in the Midwest, Northeast and Appalachia.

El Paso Permian was a relative exception, jumping 16.0 cents day/day to average to $1.415.

On the pipeline front, Southern California Gas (SoCalGas) extended substantially the timeline for a maintenance project it launched June 1. Initially, it expected to complete work within a two-month window, but it now expects the project to extend until Dec. 1. The project is expected to disrupt about 150 MMcf/d of flowing supply at the California-Arizona border.

“The significant extension of this work could put some upward pressure on SoCal Citygate futures in light of the more constrained SoCal import situation,” Genscape said. “The currently expected end date of Dec. 1 will likely go through further revisions — whether pushed forward or backward, or eventually both.”

“These events in conjunction with other maintenance in the region could lead to increased SoCal Citygate volatility as these three events contribute to a tighter supply market for the region,” the firm said.