If you were trading natural gas Thursday, either physical or futures, you might think the market had reversed itself. The futures market response to the Energy Information Administration (EIA) storage report was benign, but the physical market took a bigger hit. 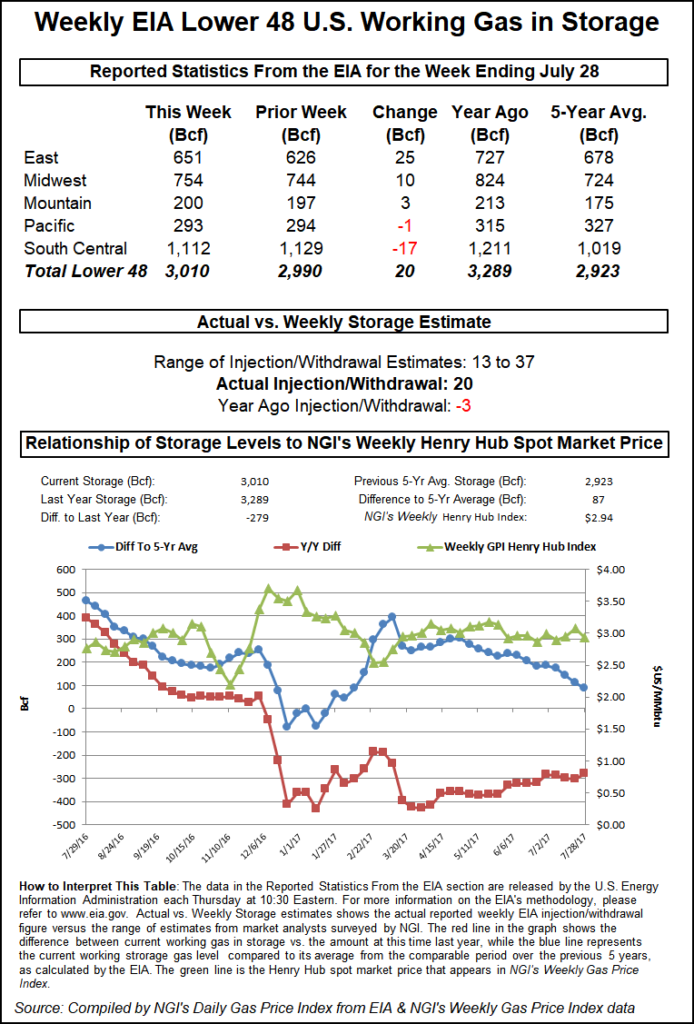 Although physical traders typically try to get their deals done ahead of the release of EIA storage data, big declines in the Northeast, Rockies, and California overwhelmed flat pricing in the Midwest, Louisiana, and the Southeast. The NGI National Spot Gas Average skidded 8 cents to $2.60.

The EIA reported a storage build of 20 Bcf, right on target with market expectations, and the market response was tempered at best. At the close September futures had fallen 1.1 cents to $2.800 and October had declined seven-tenths to $2.844. September crude oil fell 56 cents to $49.03/bbl.

The reported build was only 1 Bcf less than consensus estimates, and when the number was released, September futures dropped to $2.814 but were unable to break through the day’s high of $2.846 or low of $2.800. By 10:45 a.m., however, September had slipped to $2.802, down nine-tenths from Wednesday’s settlement.

Prior to the report traders were looking for a build on either side of the actual figures. Last year 3 Bcf was withdrawn and the five-year average stands at 44 Bcf. JP Morgan calculated an 18 Bcf injection and Stephen Smith Energy estimated a 23 Bcf build. A Reuters survey of 24 traders and analysts showed an average 21 Bcf with a range of +13 Bcf to +23 Bcf.

In spite of the weak market response, analysts saw the report as supportive. “The build for last week was in line with consensus expectations, slightly more than the 17 Bcf build in the prior week, and well below the 44 Bcf five-year average for the date,” said Tim Evans of Citi Futures Perspective. “So the report was bullish on a seasonally-adjusted basis, as expected.”

The Denver-based analytical team at Wells Fargo saw the report as neutral, with the market still undersupplied by 2 Bcf/d.

“However, based on current cool weather forecasts, which should drive relatively weak power burn levels, our model projects an 85 Bcf cumulative storage build over the next two weeks. This would still be below the five-year average of 107 Bcf and would reduce the storage surplus to just 75 Bcf by the second week of August,” Wells Fargo said.

Inventories now stand at 3,010 Bcf and are 279 Bcf less than last year and 87 Bcf greater than the five-year average. In the East Region 25 Bcf was injected, and the Midwest Region saw inventories rise by 10 Bcf. Stocks in the Mountain Region were greater by 3 Bcf and the Pacific Region was down 1 Bcf. The South Central Region fell 17 Bcf.

In the physical market the biggest movers were on the east and west coasts as moderating temperature forecasts and a tumbling next-day power market gave traders little incentive to make incremental purchases for power generation.

Temperatures were also forecast to moderate. Wunderground.com predicted Los Angeles’ 92 high Thursday would decline to 88 Friday and 85 by Saturday, still 10 degrees above normal. San Francisco’s Thursday high of 73 was anticipated to fall to 71 Friday and 66 by Saturday, six degrees below normal.