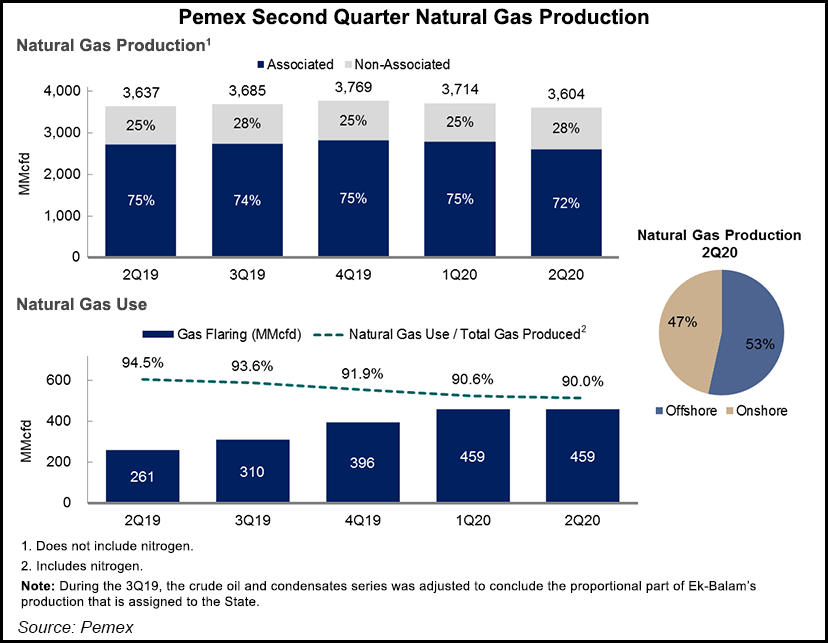 Mexico’s Petróleos Mexicanos (Pemex) held steady its oil and gas production in the second quarter despite major upheaval in oil markets caused by the coronavirus pandemic.

The figure included the 100,000 b/d of output shut-in during May and June that were part of Mexico’s commitment to the Organization of the Petroleum Exporting Countries and its allies, aka OPEC-plus, in a bid to halt falling oil prices.

Natural gas production fell marginally in the second quarter to 3.604 Bcf/d, compared with 3.637 Bcf/d in the same period last year.

Pemex reported a loss of 44.3 billion pesos ($2 billion) in the quarter compared with a loss of 53 billion pesos in the 2Q2019. The bottom line was helped by a stronger peso, CFO Alberto Velazquez said in an earnings call.

In the first quarter, the heavily indebted state-owned operator lost a staggering $23 billion.

Despite another quarter of significant financial loss, executives focused on the upstream sector during the call, which they said accounts for 3.45% of gross domestic product in Mexico.

“Despite the crisis Pemex managed to sustain its activity,” Velazquez said. The company has been “one of the best” at facing one of the worst periods in oil markets.

On the natural gas side, Pemex attributed the slight drop in production to lower associated gas output from the OPEC-plus agreement and related shut-ins, and also to bad weather in June that affected operations.

Flaring continued to be an issue, with only 90% of natural gas produced used in 2Q2020, down from a utilization rate of 94.5% in the year-ago quarter.

“Actions are being taken to achieve a better result,” Flamenco said.

Exploration added 620 million boe in proved, probable and possible (3P) reserves during the quarter, Flamenco said, including at Ixachi. In the third quarter of 2020, 28 additional wells are expected to be completed.

Ixachi is one of 20 so-called priority fields in Mexico that Pemex has said will lead future production gains.

Executives said the priority fields were adding 89,000 b/d of additional production as of July. Extra production has been slowed by infrastructure delays, bad weather and “operational problems in well drilling.”

During the second quarter, the average price of the Mexican oil export mix was $29/bbl, compared with $64/bbl in the same period last year.

As a result of austerity and capital discipline, however, the company has been able to keep its lifting costs in check, keeping it to $14.1/bbl in 2019, “below the average for the industry,” Velazquez said.

The company expects capital expenditures to be 178 billion pesos this year, or $8.1 billion, compared with 111 billion pesos in 2019.

To this end, Pemex has been helped by its hedging program. To date this year, Pemex has received five payments as part of its oil hedge amounting to $173 million. The company expects a further $193 million this year.

Executives highlighted that the company added zero new net debt in the quarter. Still, Pemex remains one of the most indebted oil companies in the world, with debt of almost 2 trillion pesos, or $91 billion, as of the end of 2019.