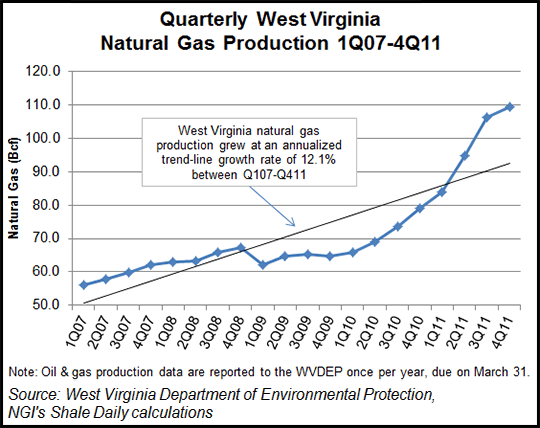 Approximately 30 MMcf/d net to Magnum Hunter was shut-in after the June 29 derecho swept across the area, and the company said it experienced gas production curtailments at the tailgate of its pipeline into the Dominion Transmission Inc. (DTI) system due to power and start-up issues at DTI’s processing facility in Hastings, WV.

By early August full power was restored to the region, allowing Magnum Hunter to begin bringing its production back online, but the lack of available processing capacity at the Hastings facility has kept a lid on output, the company said.

According to data from the West Virginia Department of Environmental Protection, production in the state grew at an annualized trend-line growth rate of 12.1% between 1Q 2007 and 4Q 2011.

“The company estimates that 9.5 MMcf/d of its production is currently being curtailed, and doesn’t expect this production to come back online until MarkWest’s Mobley processing facility is operational, which the company anticipates will occur sometime in mid-November,” Magnum Hunter said. MarkWest Energy Partners LP is currently building 520 MMcf/d of additional processing capacity and a 75,000 de-ethanization facility in Mobley and Sherwood, WV.

Magnum Hunter also said it shut-in about 1.7 MMcf/d related to about 400 producing natural gas wells in Kentucky at the beginning of 3Q2012 “because production of the wells would not have been economical, due to a combination of factors, including low natural gas prices and the cost of blend stock required to reduce the ethane content of the gas for transportation purposes.”

Since both the curtailed and shut-in production in the Appalachia region is predominately natural gas, the impact on the company’s cash flow for the third quarter has been minimal, Magnum Hunter said.

Magnum Hunter, which is active in the Marcellus, Utica, Eagle Ford, Pearsall and Williston Basin/Bakken shales, has been shifting its focus to oil and liquids (see Shale Daily, July 17). Last month the company said it planned to test for the first time the potential of the deep Pearsall Shale in South Texas, which is within the “wet gas to rich condensate window” (see Shale Daily, Aug. 9).