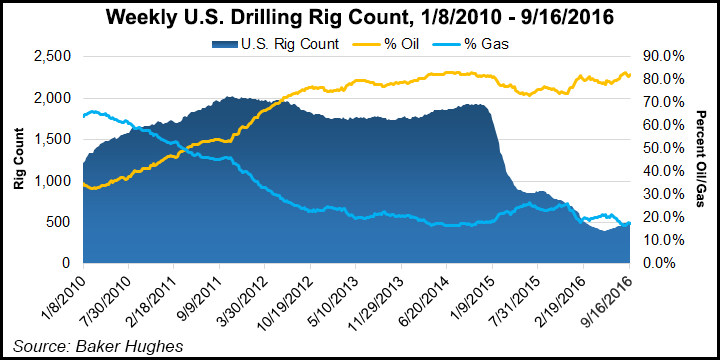 The domestic pressure pumping market has been pummeled through the downturn, with a combination of factors leading to a 35-50% reduction — or a 6-8 million hp loss — in the amount of fracture (frack) capacity that may be brought back to work without “meaningful” investments, said analysts J. Marshall Adkins and Praveen Narra.

“Of these reductions, we think 3-4 million hp has been removed permanently, while another 3-4 million hp will need substantial investment (50-60 cents on the dollar versus newbuild) to refurbish into working condition.”

Earlier this month Halliburton Co. President Jeff Miller estimated that 3-7 million hp already has left the marketplace, “either because of attrition or cannibalization,” which puts increased demand on the remaining horsepower (see Shale Daily, Sept. 9). Halliburton performs more pressure pumping in the U.S. onshore than any other oilfield services (OFS) operator.

Once exploration and production (E&P) companies are confident that the price signals mean a return to the fields, the paucity of OFS equipment could lead to pressure pumping capacity constraints at around 800 active U.S. rigs, according to Raymond James. E&Ps then may choose to “pay up” for available frack equipment, which in turn could send pricing up by 30% or more in 2017. Pressure pumping margins could in turn increase in 2018 as capacity falls short of demand.

“Specifically, we now expect the U.S. rig count expansion next year will be limited to only about 800 average rigs, even though industry cash flows (at our oil price deck) will likely justify a much higher rig count,” Adkins and Narra said. “We believe the single largest bottleneck will come from the U.S. pressure pumping industry, which has been one of the hardest hit oilfield subgroups over the past two years.”

Collapsing demand and intense competition have driven industry margins to near breakeven for even the top operators.

“As margins disappeared, spending on maintenance and new equipment has failed to keep up with the massive wear and tear that today’s frack equipment experiences,” they said.

Eventually, higher pricing is going to motivate pressure pumping operators to begin refurbishing equipment and ordering new frack fleets, which would allow for an increase in activity.

“Still, we see meaningful positives for most service providers, with pricing likely going hyperbolic in pressure pumping, driving margin expansion and some level of regained pricing power across most other service lines,” Adkins and Narra said.

Since it bottomed near 400 rigs, the domestic rig count has risen by about 100, around 25%, over the past several months. Increases in drilling and completion activity up to now have been “seamless,” as capacity was ready to get back to work, the analysts said.

However, two years of significant under spending may create big bottlenecks.

The frack industry had grown to about 18 million hp of pressure pumping capacity in 2014 before the oil slump. By 2017, Raymond James is estimating that the fleet of readily available frack horsepower will be down 40-50%, or 7-9 million hp, analysts said.

A lack of contracts, leading to a lack of investment, isn’t the only problem. Frack “intensity” has skyrocketed, with more sand per well, higher pressure, higher volumes and longer laterals, which means equipment has been worn down.

“In fact, we now believe that most fully utilized U.S. frack pumping horsepower only lasts about three to five years before a major overhaul,” at a cost of 50-60 cents on the dollar versus the cost of newbuild.

Stretched balance sheets also have forced OFS operators large and small to cannibalize parts and components from cold-stacked equipment (see Shale Daily,July 15). Adkins and Narra estimated that around 10-12 million hp of equipment exists in the U.S. frack market today. By next year, availability could fall to 9-11 million hp of readily available capacity.

If wells cannot be completed, why drill them?

“Given the frack capacity limitations…we think it will be challenging to reach 1,000 rigs by the end of 2017, much less average 1,000 for the full year,” the duo said. “Adding to the confusion, we expect frack intensity (proppant demand and lateral length) to continue increasing in 2017/18, but are conservatively modeling this largely offset by decreasing crew equipment, and efficiencies.”

Based mostly on a recovery in modeled supply, frack demand may reach a capacity-constrained 13-14 million hp by the end of 2018. However, because of uncertainty about the supply estimate, operators could hit the wall “almost any time in 2017, while remaining short for frack capacity at least through 2018.”

Once capacity hits the wall, pricing could go “berserk,” the analysts said.

Raymond James is bullish on U.S. oil prices for 2017, with a price deck forecast of $70-80/bbl. If prices do climb higher, demand for pressure pumping equipment is going to be out of sight and fiercely competitive.

“All in, we believe pressure pumping pricing will increase 30-35% in 2017 with additional support in 2018 to incentivize restoration of inactive fleets,” Adkins and his colleague said. “We estimate this pricing jump would bring most company margins at least 200-300 basis points above 2014 levels.”