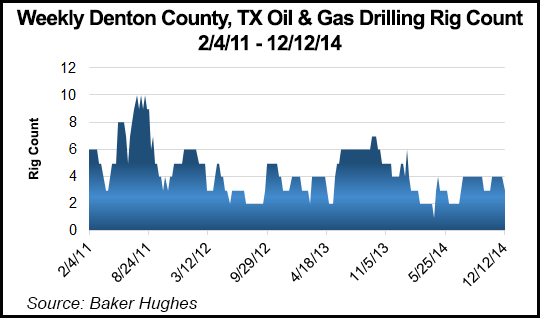 Denton City Council is scheduled to meet Tuesday to consider the changes; a town hall meeting on the issue also is scheduled for the same day. Among the changes, “production monitoring” would be added. The city currently does not have such a program but is considering the requirement that inspections be performed by a third party to determine whether equipment is operating properly.

The city also proposes to “capture all authority allowed under state law” that would allow it to map pipelines within the city. Notification and disclosure requirements for gas wells also would be strengthened, requiring surface plats to note locations of pad sites, the existence of any wells and the possibility of new wells.

The proposed ordinance language says, “The proliferation of gas wells and gas well pad sites within the city of Denton creates conflicts between such developments and other existing and future surface uses of the property…[I]t is necessary for the city to regulate the location of gas well locations relative to other surface uses within the city and to consolidate sites for development of gas wells consistent with the rights of mineral owners to reasonably access subsurface resources.”

New rules also would establish co-location requirements that would specify the siting of multiple wells on a single pad and place other restrictions on operators “to minimize surface impacts.”

Additionally, a new requirement would be that the city be named as an insured party in operator insurance policies. Each operator would have to produce a certificate of insurance, and if the insurance is later canceled, the operator’s well permit would be suspended. The proposal also specifies coverage types and limits required.

Separately, the city also has updated its Gas Well Inspections Division website, adding data and functionality and streamlining its operation.

State and industry challenges are still pending against the fracking ban that voters adopted in November (see Shale Daily, Dec. 5; Nov. 5). The proposed ordinance changes would not affect the ban, according to the city.