The city council of Barnett Shale town Denton, TX, will have a “frackas” on its hands Tuesday evening when numerous citizens are expected to show up for a hearing at which the council will consider a petition to ban hydraulic fracturing (fracking) within the city limits. 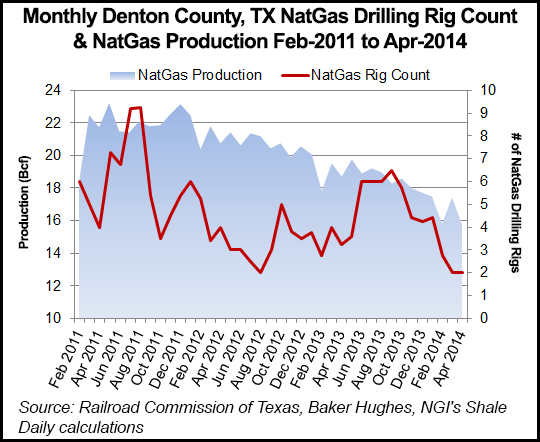 If the council does not enact a ban, the anti-frackers plan to put the issue before voters in November. Last May, council put the brakes on drilling within the city, at least until Sept. 9, while city staff and council reconsider drilling rules in light of numerous citizen complaints about drilling and fracking activity harming their health and quality of life. No new drilling permits are to be issued while the ordinance is in effect (see Shale Daily, May 12).

The oil and gas industry, as well as anti-drilling activists from around the country, have had their eyes on Denton for some time as tensions over drilling and its regulation have escalated. Denton could become the first city in Texas to ban fracking (see Shale Daily, April 23; April 10).

The threat to the industry is not lost on Barry Smitherman, chairman of the Railroad Commission of Texas (RRC), who last week appealed to the council in a letter that extolled the virtues of energy development and the state’s robust natural gas production, which is due to fracking.

But Denton Councilman Kevin Roden was not impressed by Smitherman’s appeal — in which the RRC chairman asked that his comments be read into the record of Tuesday’s hearing. Roden referred to the three-member RRC as “out-of-touch Austin bureaucrats” in a response to the letter available via his website.

“Where have you been?” Roden asked Smitherman in his blog post. “The Denton community has been struggling with very serious issues directly resulting from policies and regulations your commission is charged with enforcing. Where were you when we struggled, unsuccessfully, to find a way to prevent a drilling operator from fracking 200 feet from the back porch of several houses in an established neighborhood?

“Yet a group of concerned citizens, faced with unacceptably close drilling operations right in their backyards and frustrated with an obvious lack of regulation, take matters into their own hands and only then do you enter into the discussion — and only to advocate a squashing of their efforts. You offer no policy suggestions, no empathy, and no sign that you understand the situation we find ourselves in here in Denton.”

More than a half-dozen responses to Roden’s post all fell into the anti-fracking camp. “The Railroad Commission is one big PR mistake,” said one.

“Smitherman can fill out a white card or be present to speak on Tuesday night like everyone else. Otherwise, his comments should not be shared during the meeting,” said another.

Another commenter suggested jamming the phone lines at the RRC’s Austin office and accused RRC commissioners of sleeping well at night… “knowing that fat paycheck will be there soon regardless of the damage they allow to happen.”

And yet another writer provided evidence that the fracking controversy has spread nationwide. “I own mineral rights that I lease. I would very much like to see a ban on fracking. Good luck!!!! CM Roden, I wish I could vote for you for City Council but alas, I live in Seattle, WA!”

Two more thanked Roden for “standing up to” Smitherman and “speaking up on behalf of your constituents!”

The hearing is scheduled to begin at 6:30 p.m. CDT Tuesday. Because of the expected turnout, those who would like to speak on the fracking ban proposal must register in advance beginning at 1 p.m. CDT Tuesday. More information on the meeting is available from the city’s website. 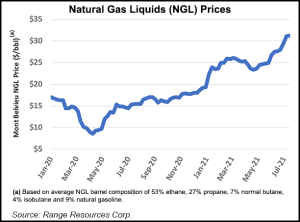 Appalachian pure-play Range Resources Corp. reported the highest natural gas liquids (NGL) premium to the Mont Belvieu, TX, benchmark in its history during the second quarter and recorded its best NGL price since 2014 as demand for fuels like ethane and propane has soared this year.  Range’s unhedged realized NGL price for the quarter was…