The city of Denton, TX, has thrown in the towel in its fight to keep hydraulic fracturing (fracking) out of the city limits after Texas lawmakers enacted legislation to block local bans on fracking in the Lone Star state. 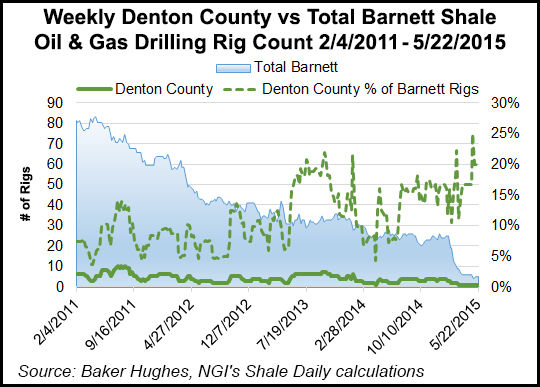 “…[T]he hydraulic fracturing ban has, in our opinion, been rendered unenforceable by the state of Texas in HB 40 such that we no longer have the authority to enforce the ban,” the city said in an announcement last week. “The city of Denton, however, will continue to regulate other surface activities related to drilling operations per our existing oil and gas well drilling ordinance (an ordinance separate from the hydraulic fracturing ban ordinance), including the regulation of setbacks, fire safety, noise, traffic, hours of operation, etc., as allowed by HB 40.”

Vantage Energy has notified the city that it will begin fracking operations on Monday (June 1). These operations have been identified as compliant with the existing city Code of Ordinances. Gas well inspectors will monitor the activities to ensure that they remain compliant with municipal regulations, as allowed by HB 40, the city said.

“The city recognizes the limitations to enforcing the fracking ban imposed by HB 40 and will comply with this new legislation,” said City Manager George Campbell.

Denton has also been notified that, in response to the scheduled Vantage operations, there may be an organized protest at the drill site, Campbell said. Anti-frackers met last Monday to plan their next steps.

“Our focus will be planning a peaceful protest and working in subcommittees to utilize the skills we gained during the campaign,” an email last week from Frack Free Denton said. “Current subcommittees are: Block Walking, Letter Writing, and Education Outreach. Our story of a grassroots community fighting Goliath continues and there are many ways to help!”

The city, Campbell said, is ready for fracking and any protests, as long as they are peaceful.

“We recognize and respect the right of citizens to peacefully assemble and will work diligently with any protest organizers to ensure the safety and protection of those gathering and of any gas well operations personnel,” Campbell said. “Throughout the past year or more, as gas well issues have been addressed in Denton, our citizens have demonstrated the utmost respect for the rule of law and we have no doubt that positive attitudes will continue to prevail.”

Denton was the first and only city in Texas to ban fracking by popular vote (see Shale Daily,Nov. 5, 2014). That led to lawsuits by industry and the Texas General Land Office. However, it was HB 40 that eliminated the fracking ban (see Shale Daily, May 18;May 4; Dec. 18, 2014).