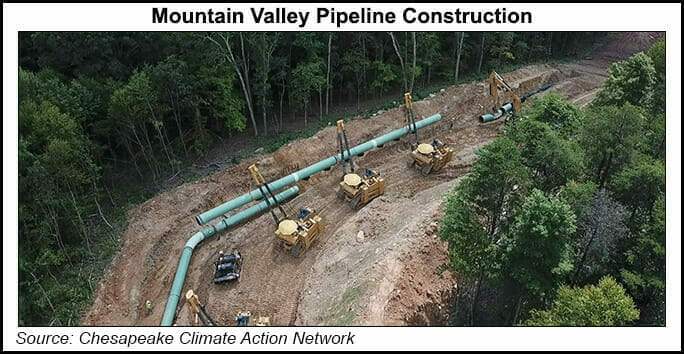 “The need for this proposed bill should be crystal clear,” Karam said, noting that MVP has been the “collateral damage” of an “uncertain permitting review process and judicial system.” Karam said the proposed legislation would create a “very defined set of rules” for all oil and gas pipelines, as well as renewable energy projects, to ensure the nation can generate domestic supplies and those for allies overseas, Karam added.

Manchin’s office this week disclosed the details of an agreement that specifically referenced the MVP project. The deal has the blessing of Schumer, House Speaker Nancy Pelosi (D-CA) and the White House to pass reforms that would ensure federal agencies do more to streamline projects like MVP.

MVP was originally scheduled to enter service in 2018, but the system has faced repeated regulatory and legal hurdles. Environmentalists have used similar tactics to stop other natural gas pipelines altogether, which has created supply constraints in various parts of the country.

Equitrans said in its second quarter earnings report Tuesday that it is still targeting a full in-service date for MVP sometime in the second half of 2023 at a total cost of $6.6 billion. MVP has taken so long to complete that the company has asked the Federal Energy Regulatory Commission for a second extension until October 2026 to finish construction.

However, Karam said the company could ultimately revise its timeline if reforms are passed.

“It’s too early to tell. It all depends on the timing of the legislation itself, but suffice it to say we’re clearly pleased with this proposed legislation, and we’re cautiously optimistic that it will be passed in the near-term,” he said. “Once we get those data points, we’ll be able to revise our guidance as needed.”

Earlier this year, the U.S. Court of Appeals for the Fourth Circuit struck down key federal permitting needed for MVP’s compliance with the Endangered Species Act and to allow for construction through national forest lands along the West Virginia/Virginia border. It is still waiting for decisions in the courts, along with others from state and federal permitting agencies.

Karam said the company expects to resolve all outstanding regulatory and legal issues regardless of whether permitting reforms are passed, but he said the company is also confident that the “proposed legislation and what’s included in there would provide the requisite certainty around MVP.”

He added that the proposed agreement is “essential to address issues that have presented costly and time-consuming delays in the construction of energy infrastructure.”

The 300-mile MVP project would move 2 Bcf/d of natural gas from the Appalachian Basin to the Southeast. Karam noted that if reforms are passed, they would also benefit the MVP Southgate project, which would extend the broader system by 75 miles from Virginia into central North Carolina. The expansion project has also faced regulatory hurdles.

“At a high level, Appalachian Basin values will remain roughly flat until further takeaway capacity becomes available,” she said. “For this year, we continue to expect that gathered volumes will be slightly down year-over-year based on current year development plans and pad timing.”

While the company has other midstream operations in Appalachia, MVP is its marquee project. The company would have a 48.1% ownership stake and operate the pipeline.