After growing by an estimated 600,000 b/d in 2018, natural gas liquids (NGL) are expected to see a slower pace of growth in the next couple of years amid possible headwinds from demand and the timeline for infrastructure projects entering service, particularly Energy Transfer LP’s (ET) Mariner East 2 (ME2) pipeline and its companion Mariner East 2X (ME2X), according to BofA Merrill Lynch. 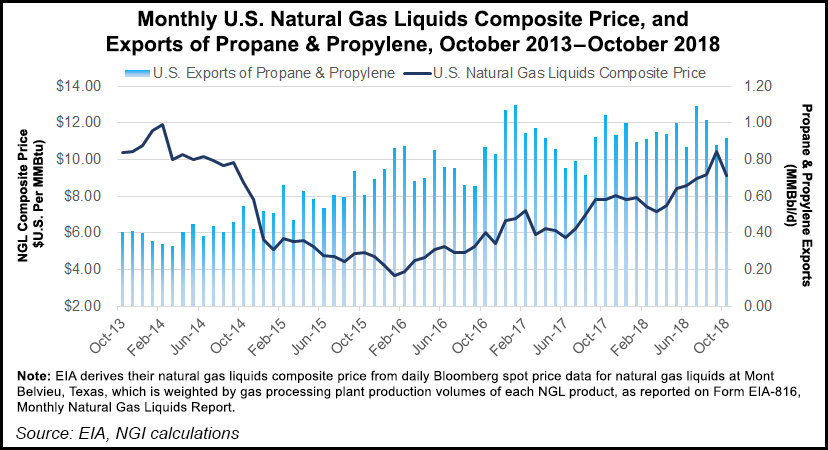 The embattled pipelines continue to face a wave of uncertainty as ME2 was originally scheduled to enter service two years ago, but only recently entered partial service following regulatory and legal issues. Full in-service of both lines, which would have a combined capacity of 525,000 b/d, is expected later this year.

The uncertainty over that timeline, however, could take a toll on already lower projected NGL growth, according to analysts. NGL production growth is expected to decrease by 100,000 b/d year/year to about 500,000 b/d in 2019 and to around 400,000 b/d in 2020, researchers said.

Appalachian pure-play Antero Resources Corp. announced plans earlier in January to cut capital spending and development activity this year in response to sliding oil and NGL prices. Gulfport Energy Corp. and Chesapeake Energy Corp. are among other producers to reduce spending and activity levels this year, joining peers in other basins.

Already, propane exports have slowed significantly. After rising by more than 500,000 b/d during the past five years, growth came in at an average 36,000 b/d in 2018, according to BofA. Although future propane export growth is expected, the ME2 and ME2X pipeline delays, and recent naphtha weakness that has put demand at risk in Europe, could weigh on the market. Flex crackers and higher inventories because of mild winter weather also provide near-term price pressure, the firm said.

Even as U.S. propane exports have bounced in and out of the money, BofA estimates that current transport costs are roughly 6 cents/gal and are in the money compared to the current forward spread of 11 cents/gal in 2019 and 14 cents/gal in 2020.

Meanwhile, an estimated 240,000 b/d of ethylene cracker capacity is scheduled to enter service this year. Another 95,000 b/d is scheduled to go online in 2020 to support near-term Mont Belvieu, TX, ethane prices, although flex crackers could limit upside price potential for that product as well. Flex crackers, which represent roughly 60% of ethylene cracker nameplate capacity, consumed mixed-stream NGLs during the disconnect between purity and mixed-stream prices last fall.

On the fractionation front, there is more than 200,000 b/d of capacity scheduled to enter service in 2019 and a “staggering” 1.5 million b/d estimated for 2020, according to BofA. Dallas-based EnLink Midstream Partners LP’s Cajun-Sibon III project is set to start this year, while Enterprise Products Partners LP (EPD) is set to bring online two 150,000 b/d fractionation facilities at Mont Belvieu in the first half of 2020.

Targa Resources Inc.’s Mont Belvieu expansions and Phillips 66’s expansion of its Sweeny Hub facility in Old Ocean in Brazoria County near Houston are also set to enter service in 2020.

The increased fractionation capacity would likely overwhelm ethane demand growth by the end of 2020 and drive long-term Mont Belvieu prices closer to Henry Hub natural gas prices, Russell said. Ethane is currently priced at 29 cents/gal for 2020, which is nearly 10 cents/gal over gas prices.

While ethane exports from the Northeast are deeper in the money compared to Gulf Coast ethane exports, gas processing economics favor ethane rejection across Petroleum Administration for Defense District (PADD) 1 and PADD 2 as these regions wait on much-needed takeaway capacity to ease transport constraints.

“Mariner East 2 should help alleviate the congestion, but given the recent increase in ethane rejection in the Northeast, the new export capacity might just redirect currently rejected ethane volumes,” Russell said.

The Mariner East projects are also dealing with other construction, permitting and legal issues which might impact in-service dates and ramp-up of volumes, according to BofA. Sunoco Pipeline LP and Pennsylvania state regulators had to shut down operations on ME1 earlier in January after another sinkhole formed near the pipeline in Chester County’s West Whiteland Township.

Sinkholes formed in the same neighborhood early last year, prompting regulators to shut down the line at that time. Other regulatory issues halted service on ME 1 for nearly three months last year.

As for liquefied petroleum gas (LPG), the scheduled in-service of a planned 175,000 b/d expansion at EPD’s Houston facility in the second half of 2019 and a 115,000 b/d expansion at Targa’s Galena Park facility near Houston in late 2019/early 2020 should boost export capacity from PADD 3, where the lion’s share of export capacity is located. LPG exports in 2019 are expected to increase to 1.2 million b/d,from an average of roughly 1 million b/d in 2018, according to BofA.

ME2 and ME2X should also nudge exports higher in the Northeast, where higher oil prices earlier in 2018 pushed more operators to focus on NGLs. Southwestern Energy Co., for example, produced a record 67,100 b/d of liquids during the third quarter, including 56,300 b/d of NGLs and 10,800 b/d of oil. Total NGL production skyrocketed, going from 3.8 million bbl in the year-ago period to 5.2 million bbl in the third quarter.