Wells Fargo Securities LLC has raised its natural gas price forecast for 2017, citing increased exports to Mexico and overseas, as well as improving demand, which should outpace “moderate” supply gains. 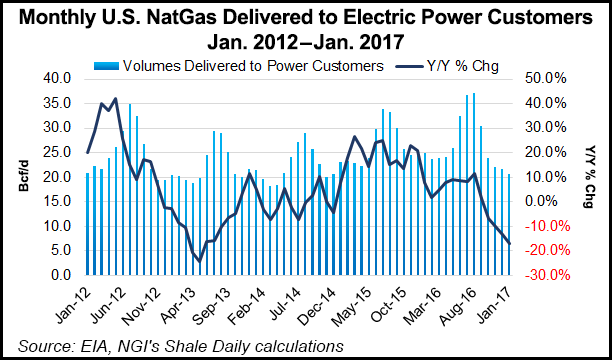 In the near-term, exports to Mexico, liquefied natural gas (LNG) exports and improving industrial and residential/commercial demand should trump “moderate supply growth and declining power demand growth,” said analyst David Tameron and his team. “As a result, we believe natural gas storage inventory levels will reach 3.8 Tcf by the end of injection season, more than 200 Bcf below comparable 2016 levels and slightly below the five-year average.”

The bullish forecast follows one by BofA Merrill Lynch Global Researchearlier this month, which kept unchanged its 2017 average from April through December at $3.50/MMBtu, 37 cents above NGI’s Forward Look’s calculated forward curve as of March 20.

However, the bullish outlooks contrast one by the Energy Information Administration, which earlier in March reduced the 2017 spot price to $3.03/MMBtu, 12% lower than its February outlook. Barclaysearlier this month also reduced its 2017 forecast to $3.02 from $3.38.

“Our model indicates that power generation demand should be down 3.5 Bcf/d versus last summer,” Tameron said.

Higher prices this year, along with increased takeaway capacity in the Marcellus/Utica shales, should drive a 2018 and 2019 supply response, according to analysts. Wells Fargo is forecasting an 8.7 Bcf/d net increase in aggregate supply from 2016 through 2019.

“Embedded in our supply forecast is an increase in ethane recovery, which should slightly offset production growth,” Tameron said. “Thus we forecast 9.8 Bcf/d of incremental U.S. natural gas production through 2019.” A 1 Bcf/d decrease in Canadian imports is included in the supply estimate.

“Since August, the U.S. natural gas rig count has increased by 74 rigs, or 91%, and now stands at 155,” Tameron noted. “Despite the increase in activity, overall natural gas production has remained relatively flat over the same time period. Typically, there is a lag in production associated with pad drilling of as much as six-to-nine months, and the relatively flat production levels over the past six months exemplify that trend.

“But our analysis indicates that most of the supply impact from the increase in activity won’t be felt until 4Q2017.”

Wells Fargo also sees up to 3.7 Bcf/d of additional capacity coming online by the end of this year, with another 15.1 Bcf/d now set to ramp up by the end of 2018.

“We certainly don’t believe that all of this capacity will end up hitting the market, but nonetheless, note that even if less than 50% of the incremental capacity were to come online by the end of 2018, it would be enough to unlock the estimated 4 Bcf/d of shut-in production in the basin,” Tameron said.

For context, Tameron pointed to the Rover Pipeline now underway which would connect Appalachia production to markets in the Midwest and the Gulf Coast. “For context, Rover alone (Phases 1 and 2) is projected to add 3.7 Bcf/d of incremental takeaway capacity in 2018,” he said.