Subtle changes in daily weather models finally caught the attention of traders as natural gas futures staged a rally on Thursday that pushed the prompt month back above $2.50 despite fresh storage data that reflected a year/year surplus in inventories. The May Nymex gas futures contract jumped 5.2 cents to settle at $2.514/MMBtu, while June climbed 4.8 cents to $2.548. 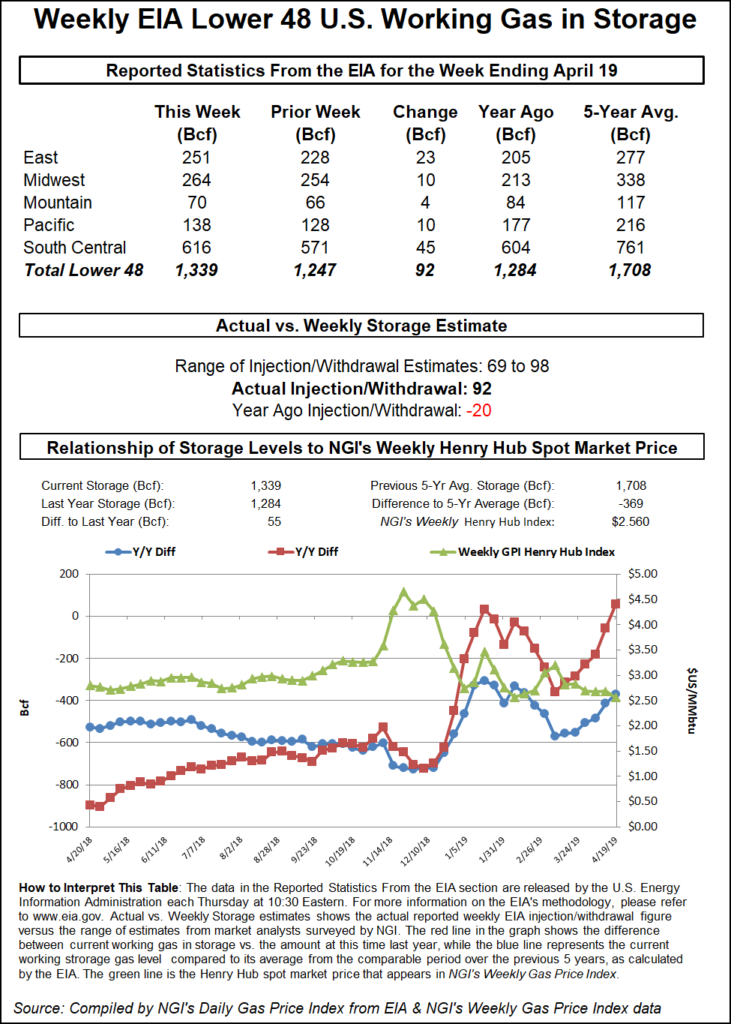 Spot gas prices, however, quickly reversed Wednesday’s gains as pleasant weather was expected to dominate the United States another day ahead of some chillier temperatures forecast to hit the East this weekend. The NGI Spot Gas National Avg. fell 1.5 cents to $2.08.

The cold weather system on tap for this weekend, seen lasting through the early part of next week, is to be partly credited for Thursday’s rally in the futures strip. Although the latest midday Global Forecast System data was mixed, with a few days a touch cooler and a few warmer, it did hold cooler trends across the northern United States through the middle of next week, according to NatGasWeather.

Weather models overnight Wednesday had shifted demand higher, with both American and European data adding gas-weighted degree days (GWDD) to the forecast, according to Bespoke Weather Services. In particular, the next several days featured some meaningful heating degree days in the north, along with some 85- to 90-degree highs in the South, boosting early season cooling demand there.

While the firm does not normally emphasize weather changes much at this point in the year, “this added demand should help further tighten up burns going forward,” Bespoke chief meteorologist Brian Lovern said.

Until Thursday, natural gas traders had largely brushed off the demand additions seen in weather forecasts since the Easter weekend. Early Thursday, the May contract was trading about a penny lower ahead of the Energy Information Administration’s (EIA) storage report, which, if anything, could have been interpreted as bearish for the market.

The EIA reported an on-target 92 Bcf injection for the week ending April 19, lifting inventories to a 55 Bcf surplus over year-ago levels.

NatGasWeather said Thursday’s move higher for the prompt month could be viewed as relief among traders that the build didn’t come in closer to 100 Bcf. “Price gains could also be attributed to cooler-trending temperatures across the northern United States this weekend through the middle of next week, where more than 30 Bcf in build size has been lost since last week.”

As for this week’s EIA data, the South Central continued to surprise to the upside this week, with a reported 45 Bcf build in that region. IAF Advisors’ Kyle Cooper questioned whether part of that storage build could be attributed to local distribution companies in the Midwest and Northeast indexing gas now for the upcoming winter and passing on the cost to ratepayers.

Looking ahead, analysts expect Thursday’s 92 Bcf build to be one of several large storage injections over the next few weeks that would continue to eat away at the deficit to the five-year average.

After bouncing a bit on Wednesday, cash prices quickly changed course as a weather system with heavy showers tracked across the east-central United States, although with only minor cooling.

A stronger cool shot was expected to push into the central United States on Friday, then across the Great Lakes, Ohio Valley and Northeast this weekend, and a reinforcing cool shot was expected to follow early next week, according to NatGasWeather. That system was forecast to drop overnight temperatures into the 30s and 40s, locally 20s, bringing a modest surge in national demand.

“This will be aided by the southern United States requiring some cooling needs as highs reach the 80s to 90s,” the forecaster said.

Regardless, the weather pattern forecast for the May 2-9 period still favors mostly comfortable temperatures, and light demand, for much of the country.

Even with the first weather system approaching the Northeast, next-day gas prices across the region fell. Algonquin Citygate spot gas was down 5.5 cents to $2.375.

Appalachian prices also declined, with substantial losses of around 50 cents at both Millennium East Pool, which averaged $1.465, and Tennessee Zone 4 Marcellus, which averaged $1.45, that could be tied to various pipeline maintenance events going on this spring.

Down in the Southeast, prices slipped a few pennies at best, as did those in Louisiana, where Henry Hub averaged $2.47.

Spot gas prices on the West Coast were stronger despite additional capacity restrictions on Gas Transmission Northwest (GTN) after a planned maintenance event was upgraded to a force majeure.

GTN’s 18-day maintenance was upgraded to a force majeure event and will restrict 513 MMcf/d compared to pre-maintenance 30-day flows, according to Genscape Inc. Compressor station issues at GTN’s Ione #9 have forced the pipe to slash operational capacity through Kingsgate by an additional 410 MMcf/d compared to Wednesday’s restriction while the work is completed.

The Alberta market appears to be handling the commensurate decrease in outflows through a combination of lower production (Nova Gas Transmission system production on April 23 sank to a 56-day low of 11.46 Bcf/d) and slightly higher injections, according to Genscape.

Meanwhile, NOVA/AECO C’s discount to U.S. benchmark Henry Hub has blown out to more than $2. Fixed prices at the hub averaged C54 cents/GJ on Thursday after gaining C2.5 cents on the day.

Downstream, Malin’s discount to Henry Hub reached a two-week high of 56 cents on Wednesday, but then contracted to just 44.7 cents on Thursday, when fixed prices rose 8 cents to $2.02.

“It is unclear as of right now whether incremental operational capacity at Kingsgate will be restored as the work is completed, or if these further constraints will last for the duration of the maintenance, which is scheduled to end May 10,” McDowell said.